A Palestinian teenager was killed by IDF fire in clashes that broke out during a demonstration against the recent establishment of an illegal outpost in the northern West Bank by national religious settlers, the Palestinian health ministry said Friday.

The ministry identified the slain youth as Mohammad Hamayel, 15, adding that six protesters were wounded during the village just outside the village of Beita, near the Evyatar outpost.

The IDF said its forces had responded to violent riots which hundreds of Palestinians took part in, hurling stones, burning tires and shooting off fireworks.

Illustrative: Palestinian protesters clash with Israeli security forces near the Hawara checkpoint, south of the West Bank city of Nablus May 18, 2021. (Nasser Ishtayeh/Flash90)

The army added that it used riot-dispersal measures, including the shooting of low-caliber Ruger rounds, which are meant to be less lethal than other forms of ammunition.

The land on which Evyatar was reestablished in April historically belonged to the adjacent Palestinian villages of Beita, Kablan and Yitma, though residents have been barred access to it for decades for what the IDF has said were security reasons.

Evyatar has already been razed several times since it was first established in 2013 after the murder of Yitzhar resident Evyatar Borovsky in a stabbing attack at the Tapuah Junction.

The outpost has quickly grown over the last two months, swelling to roughly 40 buildings for dozens of families.

The outpost’s Facebook page boasts that Evyatar prevents contiguity between the surrounding Palestinian villages while connecting the Israeli settlement of Tapuah to the Za’atara Junction and Migdalim settlement. 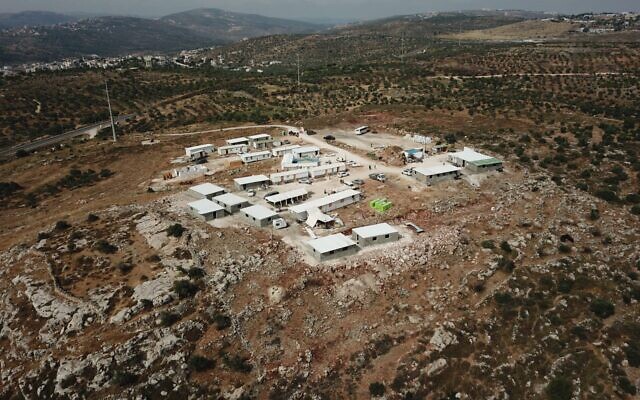 On Sunday, the head of the IDF’s Central Command issued a “demarcation order” barring additional construction in the Evyatar outpost and ordering all inhabitants to vacate the site with their belongings beginning next week.

Prime Minister Benjamin Netanyahu has objected to the order, but the matter is expected to be a problem for the next government led by Yamina chairman Naftali Bennett to solve.

The Friday clashes came just over a day after two officers in the Palestinian Authority’s security service were shot dead in an exchange of fire with Israeli forces operating in the northern West Bank.

A third Palestinian, a suspected member of the Islamic Jihad terror group who was the target of an Israeli arrest operation, was also killed in the firefight.

According to Palestinian media, the exchange of fire began when officers in the Border Police’s counterterrorism-focused Special Police Unit, known by its Hebrew acronym Yamam, sought to arrest two Palestinian terror suspects following a manhunt outside the headquarters of the PA Military Intelligence Unit headquarters in Jenin.

Two Palestinian Military Intelligence officers on guard duty noticed the arrest operation taking place, with the undercover Israeli forces operating out of a civilian vehicle, and chose to engage, likely not realizing that this was an Israeli raid.

On Sunday, a young Palestinian was shot by Israeli troops and seriously injured during clashes north of Ramallah.

Palestinian media reports said the man had been shot in the head with live fire in the village of Nabi Saleh. He was taken to a Ramallah hospital.