Two foreign workers were killed and a number of people injured, one of them seriously, as Hamas pounded Gaza border communities and southern Israel with rocket and mortar barrages on Tuesday afternoon.

The two Thai victims were killed in a direct hit to a packing house in a community close to the border.

Both men killed were foreign nationals in their 30s, medics said. Police spokesman Micky Rosenfeld said that they were from Thailand.

The strike injured eight other people, including one seriously and another moderately, police said in a statement.

Police said the casualties were treated and removed from the scene while the area was under attack.

The foreign nationals were working in an area without proper fortifications, local government officials said.

“The impact was within a community without protection, which was not included in the fortification policy, and this is the terrible result we had today,” said Eshkol Regional Council head Gadi Yarkoni, referring to a requirement for all communities close to the Gaza border to have proper protection on all buildings.

Under the military’s current restrictions, businesses operating in the Eshkol area are regardless only allowed to be open if they have ready access to a bomb shelter.

Asked why these workers apparently did not have access to such fortifications or know to enter them as air raid sirens blared throughout the region, an Eshkol spokesperson said they did have access to a portable domed bomb shelter but that the matter was being looked into.

“They had a ‘bell’ shelter. I don’t yet know why they didn’t enter it,” the spokesperson said.

The two deaths meant that three of the 12 people killed in Israel since the start of the violence last week were foreign workers.

The deadly attack came shortly after the Israel Defense Forces said that a soldier was lightly wounded in a mortar attack while assisting in the transfer of humanitarian aid shipments into the Gaza Strip through the Erez Crossing.

While Isrsel transferring humanitarian aid to #Gaza, dozens of rockets are being fired
pic.twitter.com/ehsaRHqc91

The injured 19-year-old was taken to Ashkelon’s Barzilai Medical Center for treatment for shrapnel wounds to his torso. Medics said he was fully conscious.

A building under construction in the coastal city of Ashdod also suffered a direct hit. There were no immediate reports of injuries.

Dramatic footage of a rocket impact in a building in Ashdod.

Additionally a rocket landed near a vehicle, lightly injuring one person, near the southern city of Beersheba, the Magen David Adom emergency said.

In response to the Beersheba attack, the Israel Defense Forces said it bombed one of the rocket launchers used in the barrage.

“IDF fighter jets attacked a rocket launching post belonging to the Hamas terror group in the northern Gaza Strip from which a launch was conducted a short time ago at Beersheba,” the military said. 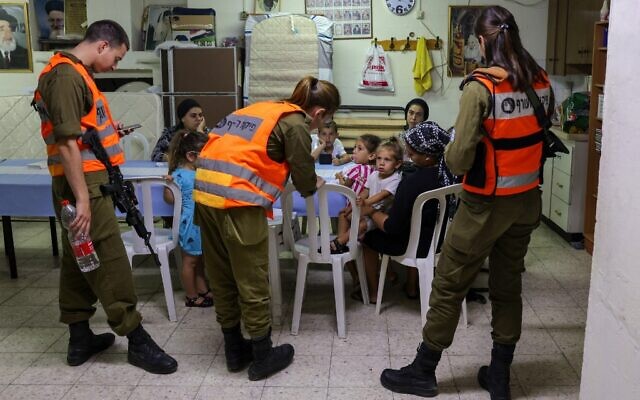 Israeli soldiers from Home Front Command visit families inside a bomb shelter in the southern Israeli city of Ashkelon, on May 18, 2021 (Menahem KAHANA / AFP)

Rockets were fired at the southern cities of Ashkelon and Kiryat Gat as well as border communities. The Hamas terror group announced that it was responsible for the fire.

Israeli aircraft continued to carry out strikes on targets in the Gaza Strip, with the IDF announcing it had hit the homes of 12 Hamas commanders in Gaza over the past day, including three on Tuesday. 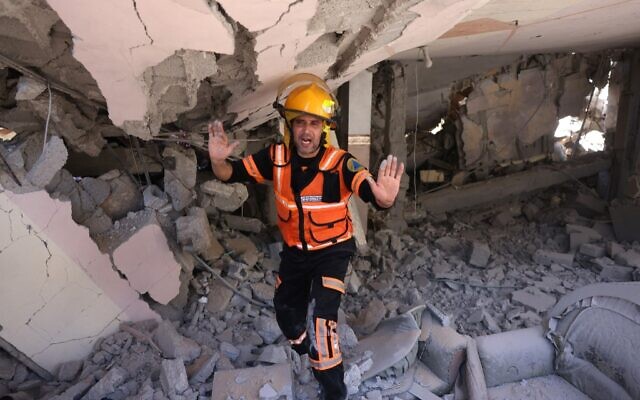 A member of the Palestinian emergency services inspects the damage to a residential building targeted by Israeli airstrikes following rocket fire on May 18, 2021 in Rafah, in the southern Gaza Strip (SAID KHATIB / AFP)

Additionally, the IDF said it hit a Hamas cell in Khan Younis that was involved in firing anti-tank missiles. The military said the strike prevented anti-tank missile fire at Israel. The army also said it bombed a group of Palestinian Islamic Jihad terrorists who were preparing to fire a rocket at Israel.

Meanwhile, the UN Security Council was due to hold an emergency meeting Tuesday amid a flurry of diplomatic efforts to try to end the violence, and European Union foreign ministers met to discuss how to use the 27-nation bloc’s political clout to help efforts to end the fighting.

Additionally, a report by Saudi-owned broadcaster Al Arabiya said that a delegation of Egyptian intelligence official may visit Israel on Tuesday. Egypt has played a key role in the negotiation of previous ceasefires.

The flurry of diplomatic activity came after a series of overnight airstrikes which IDF Spokesperson Hidai Zilberman said was the fourth in a series of bombardments on Hamas’s underground tunnel network, which the military refers to as “the metro” and is viewed as a key target by the military.

The attack destroyed some 15 kilometers (9 miles) of Hamas underground tunnels in Gaza City and Khan Younis, according to Zilberman. Upwards of 100 kilometers (62 miles) of tunnels had already been bombed in previous raids. 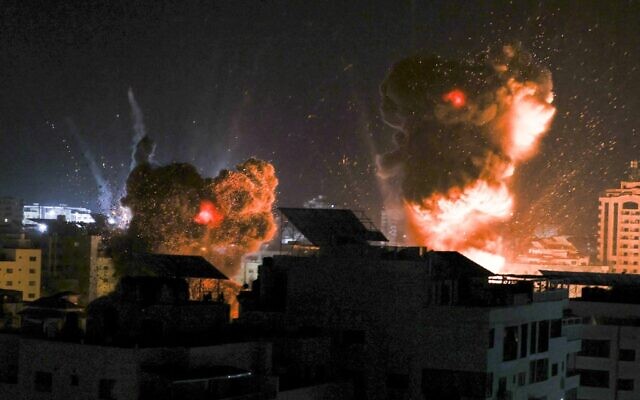 Explosions light-up the night sky above buildings in Gaza City as Israeli forces carry out strikes on the Palestinian enclave, early on May 18, 2021. (Photo by MAHMUD HAMS / AFP)

The airstrike was conducted with some 60 planes, dropping over 100 bombs on some 65 targets over the course of roughly 30 minutes beginning at 3:45 a.m. Tuesday, according to the spokesman.

Zilberman said the purpose of this strike, along with the previous three, was to convince Hamas and its operatives that its underground infrastructure was no longer safe and cannot be trusted.

The spokesman said the IDF also targeted a number of underground multi-barreled rocket launchers, destroying at least 10 of them, including six that were aimed at the Tel Aviv metropolitan area. In total, 65 of these launchpads, capable of firing multiple rockets at a time, have been bombed by the IDF since the outbreak of fighting last Monday. The military believes that Hamas and other terror groups have many more still capable of firing projectiles toward Israel, including at long ranges. 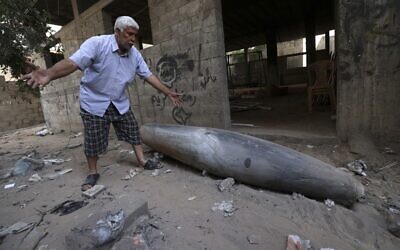 A Palestinian man examines what appears to be an unexploded bomb dropped by an Israeli F-16 warplane on Gaza City’s Rimal neighborhood on May 18, 2021 (MAHMUD HAMS / AFP)

Palestinian media also said that the IDF hit Hamas naval attack boats on the Gaza shore early Tuesday. On Monday, the IDF said it had foiled an attempt by Hamas to attack Israeli naval assets with an autonomous submarine from northern Gaza, adding that it destroyed the device shortly after launch and struck the team that operated it.

According to Gaza’s Hamas-run Health Ministry, at least 212 Palestinians have been killed so far in the nine days of the conflict, including more than 60 children. It was not immediately clear if this ministry tally included all of those killed or if there were Hamas operatives not included in the count.

According to Zilberman, more than 120 of those killed were members of Hamas and over 25 were members of the Palestinian Islamic Jihad as of Monday night. Additional terrorist operatives were likely killed overnight but Zilberman on Tuesday morning said he had yet to receive updated assessments regarding the exact number.

Twelve people in Israel, including a 5-year-old boy and a 16-year-old girl, have been killed in the rocket fire, and hundreds have been injured. 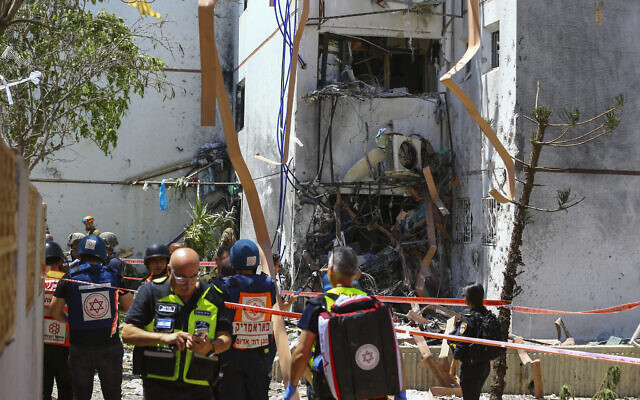 On Monday night US President Joe Biden spoke with Prime Minister Benjamin Netanyahu over the bloodshed in Israel and Gaza and “expressed his support for a ceasefire.”

It was the third call the two leaders have had since the violence in Gaza erupted and came hours after Netanyahu said he had directed the IDF to continue striking terror targets in Gaza.

Biden “reiterated his firm support for Israel’s right to defend itself against indiscriminate rocket attacks,” the White House said, adding that they “discussed progress in Israel’s military operations against Hamas and other terrorist groups in Gaza.”

Biden also called on Netanyahu to “make every effort to ensure the protection of innocent civilians,” the statement said.

Biden’s decision to express support for, but not explicitly demand, a ceasefire was intentional, an administration official familiar with the call said. However, a diplomatic source familiar with Egypt’s efforts to broker a ceasefire told The Times of Israel on Tuesday, “we’re close” and that it could be reached in “two days maximum.”

Channel 12 reported that Egypt told Hamas on Monday evening that if it wants a ceasefire, it needs to stop firing at Israel. The network speculated that this may be the reason why Hamas did not make good on a threat to fire at Tel Aviv on Monday evening, though barrages resumed on Tuesday.

Also, Monday, IDF Chief of Staff Aviv Kohavi told the heads of local governments around the Gaza Strip that the fighting in the enclave will continue for at least the next two days, for “as long as it must.”

Jacob Magid and sgencies contributed to this report