JTA — In the days after the deadliest anti-Semitic attack in American history, Pittsburgh became a symbol of the enduring dangers of hatred, as well as the Jewish communal solidarity that followed the synagogue shooting.

Two years later, the city has become a symbol and pilgrimage site of a far more insidious sort: for white supremacists who see the Tree of Life gunman as an inspiration.

“We have, since 2018, seen a dramatic increase in white supremacist-related violent incidents and in the overall presence of white supremacists within our [area],” John Pulcastro, an FBI supervisory intelligence analyst, said at a symposium last week at Duquesne University’s Wecht Institute of Forensic Science and Law. His comments were first reported by the Pittsburgh Post-Gazette.

“If anyone thinks that this is not a huge issue in this area, having worked this for over 20 years, I can tell you this area is as worse as any that I have seen throughout the entire country,” he said. “It’s very, very important to understand that it is here.”

Mass shooters have long aspired to imitate previous high-profile attackers. The “Columbine effect,” in which school shooters seek to follow the example of the two teens who opened fire on a Colorado high school in 1999, has been observed more than 100 times, according to Mother Jones, a progressive magazine that documented the phenomenon.

The extremist, white supremacist, neo-facist group, Patriot Front marched to the city county building in Downtown Pittsburgh this afternoon. A man who appears to be Thomas Rousseau, the group’s leader briefly shouted through a megaphone before the group packed up and left. pic.twitter.com/K14h0ipZ18

White supremacists follow the same pattern. In their manifestos, the shooters in the attacks in El Paso, Christchurch and Poway, California, all referenced previous far-right attacks and the ideas that motivated them.

Security specialists in the Pittsburgh Jewish community say white supremacists have come to the western Pennsylvania city in part because of the synagogue shooting, which killed 11 people. The far right, they say, views the shooter as a role model — something that has already been apparent in white supremacist forums online, where they refer to the gunman by name as a “saint.”

(And he’s not alone: A T-shirt celebrating the Boogaloo anti-government extremist movement features a picture of the Poway synagogue assailant.)

“The shooter is typically revered in some of these white supremacist neo-Nazi organizations,” said Shawn Brokos, the local Jewish federation’s director of community security. “So for that very reason, Pittsburgh was placed on the map and became synonymous in many ways with white supremacy, solely based on the events of October 27,” the date of the attack.

She added, “There’s momentum that has been gained due to the synagogue shooting.”

Illustrative: A mother hugs her son in front of a memorial at the Tree of Life synagogue in Pittsburgh on October 27, 2019. (AP/Gene J. Puskar)

Analysts all cited the recent white supremacist demonstration as particularly concerning. A Texas-based extremist group called Patriot Front brought more than 100 members to march down the city’s Boulevard of the Allies on November 7, according to the FBI, blasting a smoke machine and carrying a banner reading “Two parties, one tyranny” in capital letters. The crowd, largely if not entirely men, wore military-style gear and sunglasses.

The group has a relatively small presence in Pittsburgh, said James Pasch, the region’s director for the Anti-Defamation League, which means they brought in members from across the country.

Patriot Front, which espouses violent white nationalism and evolved from a group that was active at the 2017 far-right Charlottesville rally, has also embarked on a flyers campaign in Pittsburgh. Its red, white and blue propaganda bears slogans like “America first” (a slogan also favored by US President Donald Trump) and a map of the United States alongside the words “Not stolen, conquered.” The Ku Klux Klan has also posted flyers across the city that tend to be densely typed pages of racist invective. 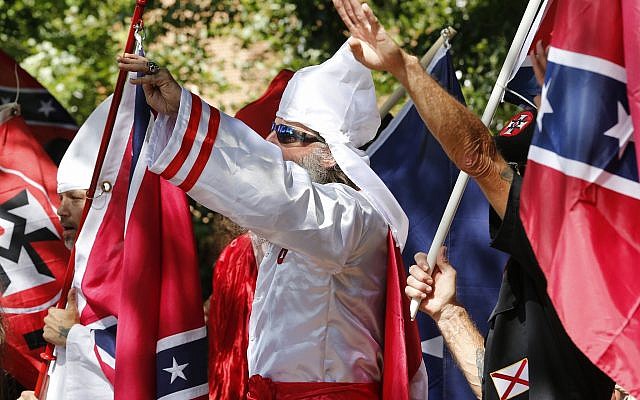 The flyers and anti-Semitic graffiti have been seen in the Jewish neighborhood of Squirrel Hill, where the synagogue shooting occurred, and elsewhere. In early September, Brokos also received multiple reports of someone yelling anti-Semitic profanity at Jews in Squirrel Hill.

“Propaganda and flyering have increased because it’s a way to increase their presence and their message without identifying themselves,” Pasch said. “It’s a way to remain anonymous while spreading hate.”

Pasch said the flyering isn’t limited to Pittsburgh. In neighboring Ohio, he said it increased more than fivefold from 2018 to 2019. Pasch also said that Patriot Front is responsible for about two-thirds of the white supremacist flyers in the country.

“They’re marking their territory, just like old gangs used to,” Pulcastro said at the symposium. “They’re recruiting. They’re trying to push for individuals to come to the fold who also find this material and ideology appealing.” 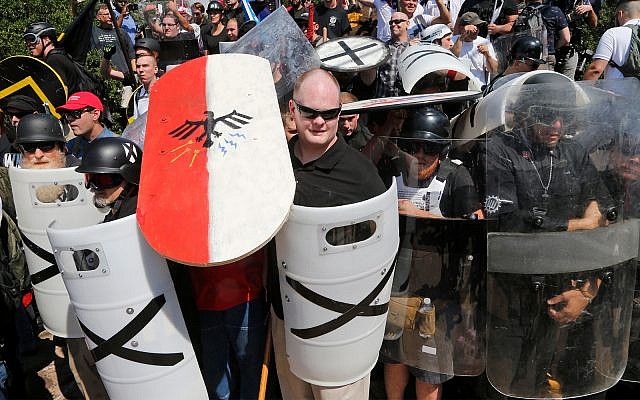 The Patriot Front demonstration happened about a month after a white supremacist concert called “Won’t Say Sorry: A night for the white working class.” Days earlier, a white supremacist who had posted a call online to murder Jews in Squirrel Hill was released from prison.

Day to day, hate does not feel like it’s in the atmosphere in Squirrel Hill, said Ellen Surloff, who was president of one of the congregations in the Tree of Life building, the Reconstructionist Dor Hadash, at the time of the shooting. But she’s worried about white supremacist violence — especially amid the current political tension.

Surloff said that having experienced a previous attack only makes her more sensitive to the danger.

“Anytime you hear that somewhere you are is a center for white supremacy, it’s not good,” she said. “My reaction is that in this political climate, this is like a tinderbox. You’re just waiting for the match to strike.”

Surloff added, “I always fell into the camp of ‘it can happen anywhere.’ So being part of a community that experienced it, you can be aware of how much damage can be done by just one of these people.” 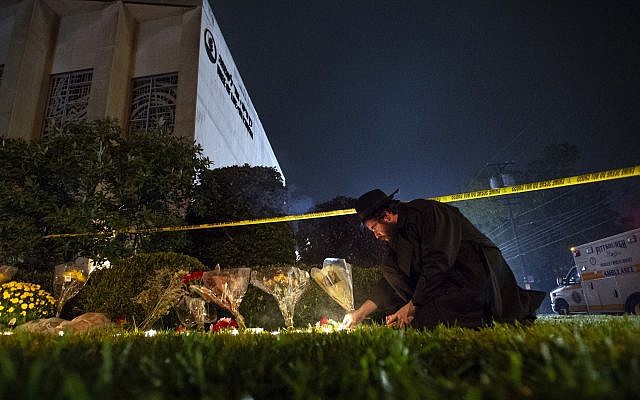 In this October 27, 2018 photo, Rabbi Eli Wilansky lights a candle after a mass shooting at the Tree of Life Synagogue in Pittsburgh’s Squirrel Hill neighborhood. (Steph Chamber/ Pittsburgh Post-Gazette via AP, File)

Pasch said the heightened activity in and around Pittsburgh mirrors a rise in white supremacist activity nationwide — and on extremist websites.

“My largest concern remains the growth of white supremacist ideology and hate online,” he said. “It knows no geographic boundaries and people can cross state lines to commit acts of hate.”

Brad Orsini, Brokos’ predecessor, said that even as Pittsburgh Jews continue to processes their trauma from the 2018 shooting, the community has remained prepared for hate to strike again.

“I think there is a higher level [of risk] in Pittsburgh because of what happened,” said Orsini, the senior national security advisor of the Secure Community Network, which coordinates security for Jewish institutions nationwide. “However, I do see the Pittsburgh Jewish communal program doing everything they can to keep that community safe.”

Surloff said that because communal activity has mostly been put on hold due to the pandemic, the risk of attack feels lower now. But she knows the same extremist forces are still out there — and in her city.

“There’s a feeling that here we are, two years later, and how do you fight this?” she asked. “The internet is out there. The weaponry is out there.”