Twenty-five years ago next week, the State of Israel was shaken to its foundations by the assassination of prime minister Yitzhak Rabin.

Having concluded a peace treaty with his friend king Hussein of Jordan, the former army chief of staff was warily spearheading an effort to forge a permanent resolution to the Israeli-Palestinian conflict.

Facing off against the maddening Yasser Arafat, Rabin was reluctantly prepared to relinquish territory with profound Jewish resonance that Israel had captured when he led the IDF in the 1967 war. He was adamant that Israel was strong enough to attempt an effort at peacemaking that could cement its regional legitimacy and ensure its Jewish-democratic future, but far from certain that the process would succeed.

Israeli Defense Minister Yitzhak Rabin during an interview May 18, 1989, at the Tel Aviv Ministry of Defence office. (AP Phpto/Anat Givon)

Rabin enjoyed unique “Mr. Security” credibility because of that previous military career, but was challenged by an opposition, led by Benjamin Netanyahu, that bitterly objected to his strategy, utterly mistrusted Arafat, and argued that the prime minister was abandoning Jewish values and had lost his marbles. In religious circles, moreover, and especially among Orthodox leaders in the settlement enterprise who were directly affected by the process, some influential voices argued that it was intolerable, a veritable crime against God, to relinquish divinely promised territory.

At seething right-wing demonstrations, Rabin was denounced as a traitor and a murderer, and likened to Adolf Hitler.

Into the incendiary atmosphere stepped a man with a gun, and shot dead the prime minister at the end of a pro-peace, anti-violence rally in central Tel Aviv. Minutes earlier, Rabin had joined in with performer Miri Aloni as she closed the rally with the “Song for Peace.” “Watch over him,” Aloni said quietly to Rabin’s wife Leah after singing the hope-filled lyrics. “I’m doing the best I can,” Leah Rabin replied. From right to left, prime minister Yitzhak Rabin, Miri Aloni, foreign minister Shimon Peres and Knesset speaker Shevah Weiss sing a ‘Song for Peace’ at the end of a rally in Tel Aviv on Saturday, November 4, 1995. Rabin was assassinated as he left the rally minutes later. (AP photo)

The peace effort collapsed in the aftermath of the Rabin assassination. For what it’s worth, looking back, this writer believes it would have collapsed had he lived — foundering on the duplicity of Arafat, destroyed by the terrorism the PLO leader never abandoned; Eitan Haber, Rabin’s most trusted aide, once told me why he disagreed, though he stressed that this was, obviously, only “an assessment.”

There’s no real telling, of course, how Israel’s path from there to here would have played out. 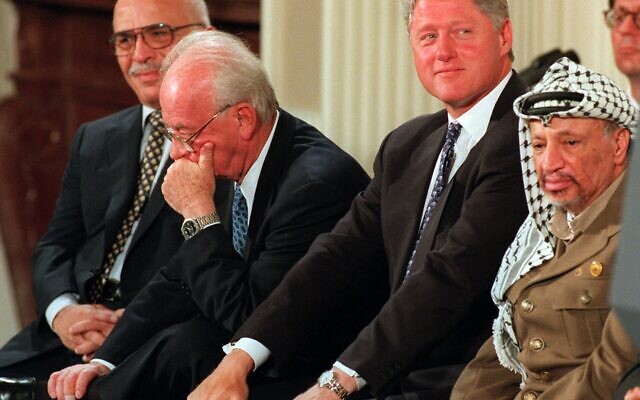 Prime Minister Yitzhak Rabin, second from left, holds his head in his hand during a Mideast accord signing ceremony, September 28, 1995, in the East Room of the White House. From left are king Hussein of Jordan, Rabin, US president Bill Clinton, and PLO leader Yasser Arafat. (AP Photo/Denis Paquin)

What is clear is that Israel hauled itself back from the abyss into which it stared on the night of November 4, 1995. We internalized that our country simply would not survive if it continued to tear itself apart from within, not in this unforgiving region.

A quarter-century later, our streets are again full of demonstrators and counter-demonstrators — reviling and championing a prime minister, with sometimes vicious rhetoric and a worrying clatter of confrontation and violence.

And thus it was quite a quirk of timing that Haber, the man who wailed “with horror, great sorrow and deep grief” in announcing that the prime minister was dead, himself passed away earlier this month. In his passing, Haber will, one hopes, help remind us of the depths to which we sank, and the imperative for tolerance and respectful disagreement even when grappling with our country’s most foundational dilemmas and challenges. We’ve been there, came back from the brink, and owe it to ourselves and our tiny, precious country to remember how greatly what unites us outweighs our divisions, and act accordingly. And may other countries learn from our history, especially at the most fateful moments of searing domestic argument.

The quirks of timing also place the Rabin anniversary a day after a riven America goes to the polls to choose a president. There is no need to strain for manufactured parallels. But there is a manifest need to highlight the dangers of fundamental disagreements spiraling into an ugliness that can tear a nation apart.