The Israel Police and Shin Bet security service revealed Wednesday that they have arrested three suspects behind several firebomb attacks in Jaffa, including one that left a 12-year-old Arab boy seriously injured. It said the suspects were arrested “in recent weeks.”

In a joint statement, the Shin Bet and police called the May 14 incident a “terror attack.” Muhammad Gintazi was seriously wounded in the firebombing, which also lightly injured his 10-year-old sister. The attack came during a spate of ethnic violence in mixed Jewish-Arab cities and elsewhere across Israel last month.

The suspects are Arab residents of Jaffa and prosecutors intend to file “harsh indictments” against them in coming weeks, the statement said.

“In the incident, a number of Molotov cocktails were thrown toward several Jewish homes, and one was thrown toward the home of an Arab family, the Gintazi family,” the statement said. It accused the assailants of planning on attacking Jewish homes in Jaffa’s Ajami neighborhood “out of a nationalist motive of revenge in light of the disturbances in Lod and the violent incidents on the Temple Mount.”

The statement also said the three fled after “understanding their mistake” in accidentally targeting an Arab home, even though they had planned to attack additional Jewish homes.

They will also face weapons charges after police discovered illegal arms that were stashed around the neighborhood.

Firebomb victim Muhammad pictured shortly after his home in Jaffa was attacked. (Screenshot/Twitter)

Muhammad Gintazi arrived at Sheba Medical Center with 12% of his body covered by burns and suffering from smoke inhalation, and he had to be mechanically ventilated and sedated. However, doctors have since said he is recovering well.

The attacks came as violence spread across Israel’s mixed Jewish-Arab cities following clashes between Jerusalem police and Palestinian rioters in and near the Al-Aqsa Mosque on the Temple Mount — Judaism’s holiest site and Islam’s third-holiest — and the planned eviction of Palestinians from homes in an East Jerusalem neighborhood.

The violence also sparked an intense 11-day battle between Israel and terror groups in Gaza after Hamas fired rockets at Jerusalem. 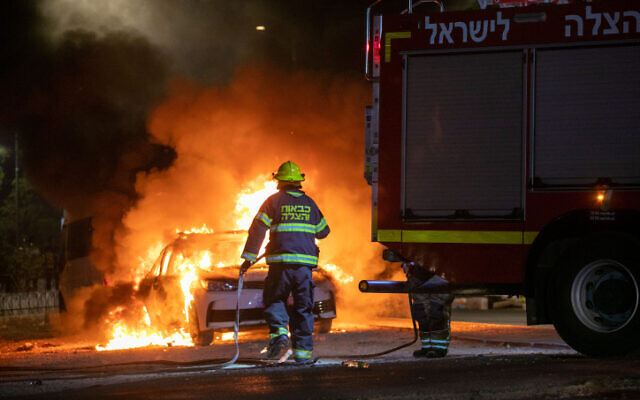 A firefighter is seen on the streets of the central city of Lod amid ongoing unrest, May 12, 2021 (Yossi Aloni/Flash90)

An Israel Prize-winning former head of the country’s space program died on Sunday, weeks after he was critically injured when Arab rioters torched the hotel where he was staying in the northern town of Acre. Aby Har-Even, 84, sustained significant burns and suffered from smoke inhalation as a result of the attack. He had been unconscious and attached to a ventilator since his arrival at Haifa’s Rambam Medical Center on May 11.