WARSAW, Poland (AP) — Three members of an advisory council for the Auschwitz-Birkenau museum in Poland have resigned after the government’s appointment of former Polish Prime Minister Beata Szydlo, a top member of the country’s right-wing ruling party, to serve on the council.

Culture Minister Piotr Glinski recently appointed Szydlo to a four-year term on the Auschwitz-Birkenau State Museum Council, a nine-member body made up of Poles who meet once a year to advise the museum’s director. It is separate from the International Auschwitz Council, which includes Holocaust survivors and international experts.

The first advisory council member to resign was philosopher and Jewish leader Stanislaw Krajewski, who said he took the step Tuesday to protest what he called the “politicization” of a group so far made up of experts. He was followed by historians Marek Lasota, who also belongs to the ruling party, and Krystyna Oleksy, a former deputy director of the Auschwitz Museum.

Krajewski, who was about to begin his third four-year term, told The Associated Press on Friday that he does not remember a politician ever being named to the council and did not feel comfortable with the step, particularly given the policies of the populist and nationalist Law and Justice Party.

“It’s hard to say what would happen, but it would change the nature of the body very considerably,” Krajewski said. “I don’t want to be on the same council with a major politician of the ruling party today.”

Krajewski is a co-creator of a post-World War II history section at the POLIN Museum of the History of Polish Jews in Warsaw and a co-founder of the Polish Council of Christians and Jews. He is also a leading member of Warsaw’s Jewish community who since the 1970s has worked to revive Jewish life in Poland that was nearly wiped out by the Holocaust.

Stanislaw Krajewski, a University of Warsaw professor and prominent member of the Jewish community on February 25, 2019 in Warsaw, Poland. (Janek Skarzynski/AFP)

After Law and Justice took power in 2015, its leaders launched what they described as a “historical policy offensive” aimed at building pride in the nation’s past. The party has used museums, state media and other tools to push a patriotic vision of Poland which critics say has veered into an abuse of history and distortion.

Poles are proud of the nation’s role in resisting the German occupation during nearly six years of World War II. The government has sought to focus on that aspect of Polish behavior during the war, including the Poles who saved Jews, while seeking to discourage examinations of the role some Poles had in helping occupying German forces in their mass killing of Jews.

The strategy has led to accusations of historical whitewashing and created international controversies in recent years.

“The fear is that this would be another move in the direction of making also the Auschwitz-Birkenau museum part of their historical policy,” Krajewski said.

Sebastian Rejak, acting director of the American Jewish Committee’s Central Europe office, said he fully supported the decision of the three to resign, adding: “The less politics in teaching history and remembering the past, the better.” 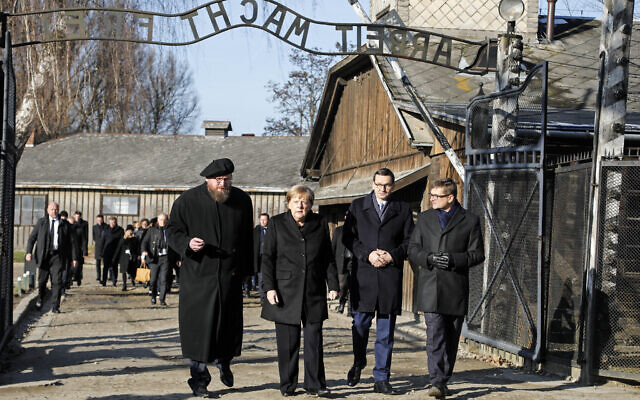 Szydlo, who was prime minister from 2015-2017, made comments at a memorial observance at Auschwitz in 2017 that many understood as a defense of her government’s tough anti-refugee policies. Szydlo later denied that her comments were about migration.

Szydlo is now is a member of the European Parliament for the Law and Justice party. She has studied ethnography and history, and is from the area of Oswiecim, the Polish town where the site of the former Auschwitz death camp is located.

Earlier this week, she called her appointment “an honor and a great duty for me, an inhabitant of the Oswiecim region.”

Emails to her office and the Culture Ministry seeking comment on the council resignations went unanswered.