Police said the teens, aged 13-14, were shot in the 21st Neighborhood of the southern city.

Initially, cops were alerted that two people had been shot and officers who arrived on the scene found two of the teens, one with serious injuries and the other in a moderate condition, police said in a statement.

A search of the area discovered a third boy in critical condition.

Police units in the Bedouin city of Rahat after a shooting incident, April 8, 2021. (Israel Police)

All three of the children were taken to the Soroka Hospital in Beersheba for treatment.

Police said an investigation was opened involving large numbers of officers as well as aerial support from helicopters as forces searched for the shooter.

Magen David Adom paramedics said that when they arrived at the scene they found two of the boys lying in the street with gunshot injuries. They were given first response assistance and rushed to the hospital. The third boy, who was found later, was taken to the hospital in an intensive care ambulance.

Two of the children are brothers and the third is their cousin, according to the Ynet website, which reported they are all members of the Abu Shivan family.

An initial assessment concluded that the incident was not a clash between clans but rather an internal family issue, the report said.

Last week police arrested two suspects on suspicion of involvement in the fatal shooting of a teen last month in the Arab Israeli town of Jaljulia. 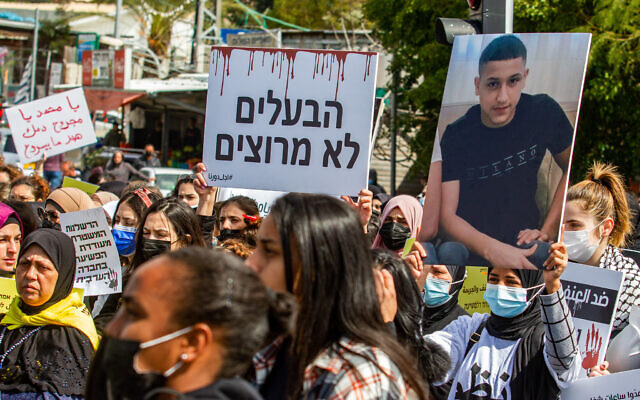 Israeli Arabs and activists protest against the murder of teenager Mohammed Adas, in Jaljulia, March 12, 2021. (Flash90)

The two boys who were gunned down in the town of Jaljulia in central Israel on March 9, were sitting only 100 meters from a police station at the time of the attack, according to reports.

The attack drew renewed outcry over violence in Israel’s Arab community as Ades became the 23rd Arab Israeli to die in violent circumstances this year, and the third under the age of 20. Since then the total number of deaths has risen to 28.

Law enforcement has been accused of neglecting violent crime in Arab communities, a charge highlighted by the shooting’s proximity to a police station.

Organized crime is largely seen as the engine of the spread of violence in Arab cities and towns. Arab Israelis blame the police, who they say have failed to crack down on powerful criminal organizations.

According to the Abraham Initiatives nonprofit, 28 Arabs have been killed violently inside Israel since the beginning of 2021. Six were killed by police, while 22 were killed as a result of criminal activity.