Abraham Daniel Ambon, a 21-year-old Yeshiva student from Argentina, was buried Monday morning, in the last funeral of the 45 victims of the Mount Meron disaster.

Ambon’s funeral took place at the Heichal Yitzhak Yeshiva in Jerusalem, after his parents landed in Israel early Monday morning from Argentina.

Hundreds attended the funeral and joined the procession from the Jerusalem yeshiva to the Har HaMenuhot Cemetery.

“The pain is huge,” said Ambon’s father at the funeral, which was live-streamed. “When we heard the news, we couldn’t believe it.”

Abraham Daniel Ambon, 21 of Argentina, killed during the fatal crush in Mt. Meron on April 30, 2021. (Courtesy)

A friend also spoke at the funeral, calling Ambon “the existence of goodness.”

“How was it that your bright face was thrown to the ground?” said a rabbi from Ambon’s yeshiva, according to the Ynet news site.

Forty-one of the victims were buried by noon Sunday, but the final four funerals, for Daniel (Donny) Morris, 19, of Teaneck, New Jersey; Yossi Kohn, 22, from Cleveland; Dubi Steinmetz, 21, of Montreal; and Ambon, were delayed to allow relatives to arrive from overseas. 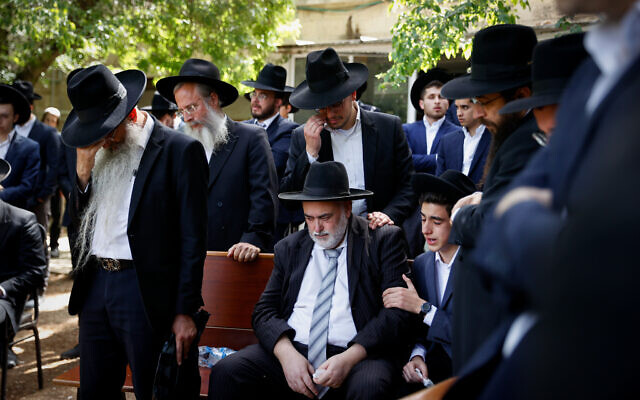 Abraham Ambon’s father sits during his son’s funeral in Jerusalem on May 3, 2021. Ambon was one of the victims of the Meron disaster, where 45 people were crushed to death during a Lag b’Omer celebration. (Yonatan Sindel/Flash90)

Also in attendance at the funeral was the head of the ultra-Orthodox Shas party, Interior Minister Aryeh Deri.

Media reports in recent days have revealed that Deri went to substantial lengths to ensure the mass gathering would take place at Meron without restrictions. Those restrictions were apparently more related to COVID concerns than the terrifying annual overcrowding. 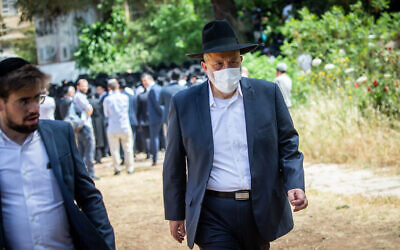 Interior Minister Aryeh Deri attends the funeral of Abraham Ambon, one of the victims of the Meron tragedy, in Jerusalem, May 3, 2021 (Yonatan Sindel/Flash90)

According to Channel 12, Deri sent an official request to Public Security Minister Amir Ohana ahead of the event, urging that “anyone who wants to come [to Meron] should be allowed to do so.”

Ohana, who is responsible for police, went on to approve the request and no limits on the number attendees were put in place at Meron, despite pleas from health officials concerned about coronavirus transmission.

In addition, Deri indicated in a radio interview last week, hours before the Meron tragedy, that he had blocked Health Ministry efforts to impose restrictions on this year’s event, Channel 13 reported Saturday.

In the excerpt from Deri’s interview, the Shas minister said that “not all officials” understand the importance of allowing the mass gatherings to take place, and that health officials had for weeks been trying to impose restrictions — to prevent the spread of COVID-19 — but, he added, “Praise the Lord, we got past this as well.”

More than 100,000 people attended the annual gathering in the northern Galilee, which includes visits to the gravesite of Bar Yochai and massive bonfires on the mountainside. A bonfire lighting ceremony for the Toldot Aharon Hasidic sect was being held at the pilgrimage area, close to Bar Yochai’s tomb. 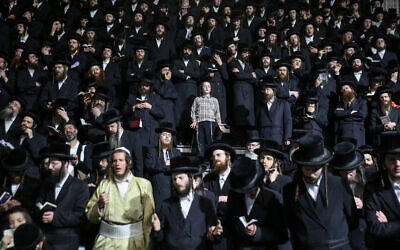 The victims included many children and teens, including two sets of brothers, as well as young fathers and rabbis. They included at least nine foreign citizens, among them six Americans, two Canadians and one Argentinian — Ambon.