Police are searching for a 39-year-old man from the southern city of Beersheba, who was last seen at the Mount Meron pilgrimage site on Thursday night before the deadly crush.

The family of Chaim Yitzhak Icht said they have not made contact with him since the disaster. Authorities have informed them he is not among the 45 dead, who have all been identified, nor among the injured. He was last seen at 8:30 p.m. on Thursday at Mount Meron. He is 6 foot 1 (185 centimeters), thin and bearded.

“We checked all the hospitals and didn’t find him. He traveled there on Monday and since then we don’t know where he is. I am afraid he was attacked and fell. Maybe he fell and was hurt,” his mother, Sophia, told the Kan public broadcaster.

His sister Bracha said he has disappeared in the past after visiting Mount Meron.

“We are very worried. He has traveled in the past to Meron every year. In the past there was a similar incident in which he disappeared. He has three children,” she told Channel 12.

More than 100,000 people were at the annual Lag B’Omer gathering on Thursday in the northern Galilee, which includes visits to the gravesite of 2nd century sage Rabbi Shimon Bar Yochai and massive bonfires on the mountainside. A bonfire lighting ceremony for the Toldot Aharon Hasidic sect was being held at the pilgrimage area, close to Bar Yochai’s tomb.

On Sunday morning, the Abu Kabir Forensic Institute in Tel Aviv said it had finished identifying all 45 bodies from the deadly crush. It also said 44 bodies had been released for burial, and the remaining body would be released during the day at the request of the family. 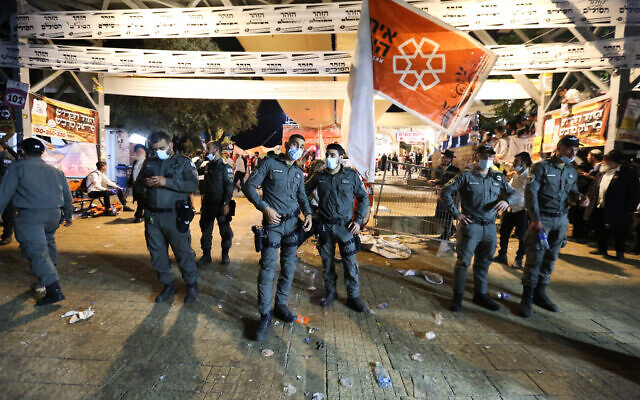 Israeli rescue forces and police near the scene after a crush killed and wounded dozens during the celebrations of the Jewish holiday of Lag B’Omer on Mt. Meron, in northern Israel on April 30, 2021. (David Cohen/Flash90(

Most of the victims were buried on Friday, Saturday night, and Sunday.

Among the victims of the fatal crush caused by overcrowding in a narrow walkway were 10 foreign citizens: six Americans, a British national, two Canadians, and an Argentinian.

The incident, which happened early Friday during celebrations of the Lag B’Omer festival, is the country’s deadliest civilian disaster.