By the end of March, Israel will have vaccinated 5.2 million citizens against the coronavirus, according to a plan reportedly drawn up by the Health Ministry.

Health officials told Channel 12 Monday that based on the recent agreement reached with the Pfizer pharmaceutical company, each week will see shipments of hundreds of thousands of vaccine doses land in Israel.

If Pfizer meets all of its benchmarks in vaccine shipments, 5.2 million Israelis will be vaccinated by March 20, according to the Health Ministry plan. That date also happens to be three days before the parliamentary election. Prime Minister Benjamin Netanyahu, who is on trial for corruption charges, has made the country’s vaccine drive the focal point of his reelection campaign.

Staff members receive the second round of the COVID-19 vaccine, at the Sheba Medical Center Tel haShomer outside of Tel Aviv, on January 10, 2021. (Miriam Alster/Flash90)

The Health Ministry is also planning to introduce two new concepts, as the county readies to reopen the economy.

The first is a vaccination certificate, which every Israeli will receive shortly after receiving the second dose of the vaccine. This certificate will exempt civilians from having to quarantine, even after coming in contact with a coronavirus carrier or after returning from a “red country” where virus cases are high.

The second concept is a green passport, which will be granted to certain businesses upon the meeting of certain benchmarks. This will allow them to reopen to large crowds of people, so long as those entering have been vaccinated or can produce a negative test result.

However, health officials plan to caution the government against handing out these green passports too quickly before enough Israelis have been vaccinated because doing so could lead to thousands rushing to get tested just to attend a sporting or cultural event, and not because they might have come in contact with a carrier.

Sunday saw 49,897 Israelis receive their first inoculation, bringing the total to 1,870,652 — by far the highest vaccination rate in the world, according to the Our World In Data website.

Netanyahu vowed Sunday that Israel would ramp up its vaccine drive further, to a target of administering 170,000 shots a day, as a new batch of hundreds of thousands of doses of Pfizer’s vaccine touched down at Ben Gurion Airport. 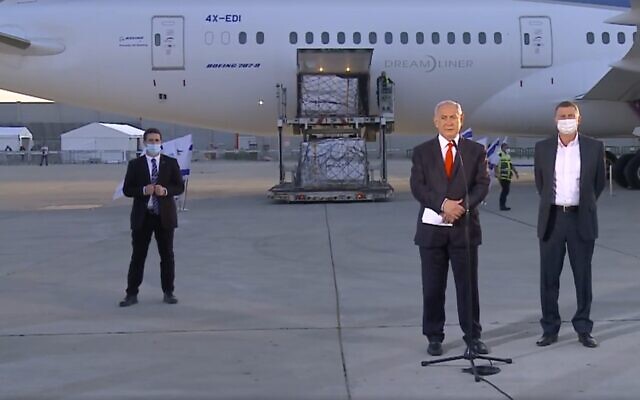 Meanwhile, sources in the Health Ministry told the Kan public broadcaster Monday that the exit from Israel’s latest tightened lockdown, imposed Friday, will be gradual and depend on the vaccination rate and the trend seen in serious COVID-19 cases.

Even once the current closure expires — that is currently set for January 21 — the economy won’t fully reopen immediately, the Health Ministry sources added.

There were also 6,896 new cases recorded by the Health Ministry on Sunday, with 7.2 percent of tests coming back positive. The number of seriously ill patients on Monday evening stood at record 1,069 while the total death count held at 3,704.

The relatively low number of new cases — compared to last week with over 8,000 a day — can partially be ascribed to the significantly reduced number of tests carried out over the weekend. The highest daily tally since the start of the pandemic was on September 30, when over 9,000 infections were recorded while the country was under a second lockdown.