Five Israelis from one family, including a two-year-old child, were among the 14 people killed Sunday when a cable car plummeted to the ground in Italy’s Piedmont region, Israel’s Foreign Ministry confirmed Monday morning.

The ministry said in a statement that Amit Biran, 30, his wife Tal Peleg-Biran, 26, their two-year-old son Tom Biran, who lived in northern Italy, and Peleg-Biran’s grandparents Barbara and Yitzhak Cohen of Tel Aviv, 71 and 81, were all among the dead.

Another son, five-year-old Eitan Biran, was critically injured in the disaster and is currently hospitalized in Italy. The Foreign Ministry said that his aunt, Amit Biran’s sister, was with him and other family members were expected to fly out from Israel on Monday.

The Israeli embassy in Rome said it was working with the family to bring the bodies of the deceased to Israel in the coming days.

Tal Peleg-Biran (R), her husband Amit Biran and their son Tom Biran — killed on May 23, 2022 when a cable car collapsed near the summit of the Stresa-Mottarone line in the Piedmont region, northern Italy. (Facebook)

The couple, Amit and Tal, lived in the city of Fabia in the province of Lombardy in northern Italy. Amit studied medicine there and worked as a security guard at a Jewish school in the city.

The president of the nearby Milan Jewish community, Milo Hatzbani, told Israel’s Army Radio that the accident was “a great disaster.”

“I know the father well, I spoke to him last Friday. He told me he decided to go for a trip with the children and with the grandparents who came from Israel,” Hatzbani said.

Amit Biran’s sister said that Barbara and Yitzhak Cohen had decided to visit the family in Italy to get away from the tense security situation in Israel during hostilities with Hamas over the past two weeks.

“Yitzhak and Barbara wanted to see the great-grandchildren. Rockets were falling in Israel, they thought ‘what can happen in Italy?’” she said.

The accident took place in Stresa, a resort town on the shores of Lake Maggiore in Italy’s Piedmont region, the Alpine rescue service said on Twitter. The cable car was believed to have fallen around 15 meters (50 feet), according to Italian media. 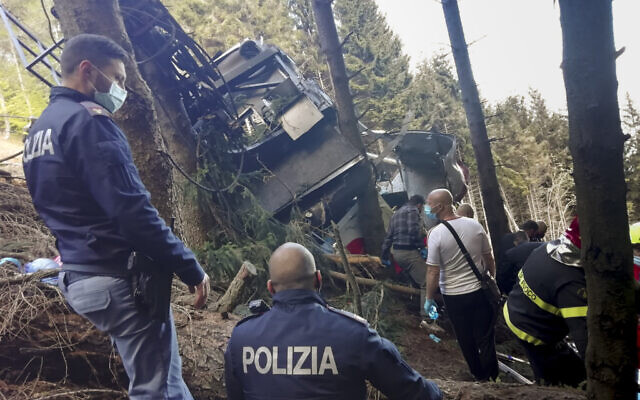 Rescuers work by the wreckage of a cable car after it collapsed near the summit of the Stresa-Mottarone line in the Piedmont region, northern Italy, May 23, 2022. (Italian Police via AP)

The 20-minute cable car ride, popular with tourists, links Stresa with the 1,500-meter (4,900-foot) summit of the Mottarone mountain and offers spectacular views of the Alps.

The Italian ministry of infrastructure said in a statement that the accident appeared to have been caused by a ruptured cable near the top of the route.

A local hospital spokesman initially said the two Biran children had been seriously injured and taken by helicopter to a pediatric hospital in Turin. Tom died after several attempts to restart his heart failed and “there was nothing more we could do,” said hospital spokesman Pier Paolo Berra. 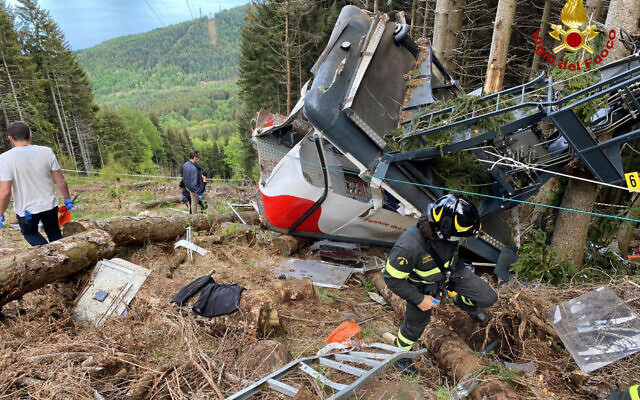 Rescuers work by the wreckage of a cable car after it collapsed near the summit of the Stresa-Mottarone line in the Piedmont region, northern Italy, May 23, 2021. (Italian Vigili del Fuoco Firefighters via AP)

Infrastructure Minister Enrico Giovannini announced an inquiry into what he called “a dramatic occurrence that we are following most attentively.”