A 5-year-old Palestinian boy was injured Thursday night by a rock thrown by West Bank settlers toward a vehicle he was traveling in, according to an Israeli rights group.

The boy was in the car with his parents when settlers hurled rocks at them near the Givat Assaf outpost, Yesh Din said.

The group didn’t give any details on the boy’s condition, but said he sustained injuries to his face and that his parents weren’t hurt.

There was no comment from Israel Police on the matter.

A 5-year-old Palestinian boy who was injured after settlers allegedly threw rocks at the car he was in, near the Givat Assaf outpost in the West Bank, January 21, 2021. (Yesh Din)

The incident was one of several cases of violence toward Palestinians reported Thursday by Yesh Din, which said settlers blocked numerous junctions in the West Bank and in some cases threw rocks at Palestinian cars.

According to the organization, 44 settler attacks against Palestinians have taken place in recent weeks and the 5-year-old was the second Palestinian child injured this week.

The notable increase in ultranationalist violence comes after 16-year-old Ahuvia Sandak was killed in a police chase after allegedly hurling stones at Palestinians in late December. 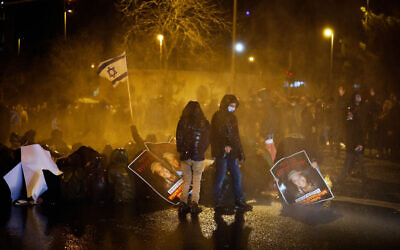 Police use water cannon on protesters during a protest over the death Ahuvia Sandak, who died in a car crash during a police chase, near the Jerusalem offices of the Police Internal Investigations Department, January 2, 2021. (Olivier Fitoussi/Flash90)

Sandak, a resident of the Bat Ayin settlement, was fleeing Border Police in a car with three other hilltop youth when his car flipped over, killing him. According to police, Sandak’s group fled from police before losing control of their vehicle. Sandak’s defenders view his death as a police killing; they allege that the police car hit his vehicle from behind, causing it to run off the road.

Sandak’s death ignited weeks of near-nightly protests in Jerusalem and the West Bank. Demonstrators have thrown stones, attacked buses, and blocked major thoroughfares. In turn, police have responded forcefully, including apparently beating a protester in one widely circulated clip.