At least 20 Israelis were hurt, including a six-year-old boy in critical condition, as Gaza-based terrorists fired a fresh volley of rockets, setting off warning sirens Wednesday night in the Tel Aviv metropolitan area and cities in the south.

The Gaza-ruling Hamas terror group said it fired a massive barrage at Israel that included 130 rockets in retaliation for a strike on a multi-story building in Gaza City. The Palestinian Islamic Jihad terror organization also said it fired volleys of rockets at the Jewish state.

The barrage saw some rockets directly hit buildings. The city of Ashkelon came under a particularly heavy rocket bombardment, with the army telling residents to remain in fortified areas for several hours.

In the Gaza border town of Sderot, seven people were hurt, including a young boy in a direct hit on a building. The boy’s mother grabbed him and took him to the fortified room when the incoming rocket sirens sounded, Channel 12 news reported. But in a rare incident, the rocket shrapnel broke through the shelter’s window, critically injuring him and also wounding his mother.

The Magen David Adom ambulance service said among the others hurt in Sderot, two were in moderate condition, a 40-year-old woman and a 5-year-old boy.

The rest of those wounded suffered mild injuries.

A paramedic said the missile struck an apartment in a nearby residential building, sparking a fire, but no one was in the building. He said rescue workers then went to the adjacent building where they found the six-year-old unconscious with shrapnel wounds. Medical personnel gave him urgent treatment and rushed him to the local hospital.

A rocket also struck a home in the southern coastal city of Ashkelon. There were no immediate reports of injuries from the direct hit.

Police said they are deployed at 14 sites in Ashkelon following rocket attacks on the city, and in three sites in Sderot. It is not clear whether each of the sites was hit by a rocket or shrapnel.

Also in the south, several communities in the southern Sha’ar Hanegev area have lost power following the latest rocket barrage from Gaza, a spokesperson for the municipality said, and an empty kindergarten was hit. The spokesperson said the rockets also sparked a fire.

Hamas said the initial barrage was a response to Israel’s leveling of the al-Shourouk tower, which Israeli fighter jets demolished after repeatedly warning those inside to leave, according to reports from the Strip.

The Israel Defense Forces said the 14-story building housed the offices of Hamas’s military intelligence office and “communications infrastructure that was used to transfer tactical-military messages by the terror groups.”

“The IDF will continue to attack terror targets as long as required,” the military said in a statement.

Al-Shourouk was the third high-rise building containing more than 10 stories to be destroyed by the IDF in this current round of fighting.

According to Gaza news outlets, the security manager of the building was told to evacuate the structure and it was hit by a number of so-called “knock on the roof” attacks, in which non-explosive missiles are dropped on a building to warn those inside to exit, before larger bombs dropped by fighter jets destroyed the building.

The IDF also said one of its aircraft bombed a Palestinian Islamic Jihad team as it was preparing to launch rockets into Israel from the central Gaza Strip.

“The cell was attacked as it was making preparations for rocket launches at Israeli territory,” the military said.

Shortly after, Islamic Jihad’s military wing threatened to send another barrage of rockets toward Israel at 9 p.m.

“The time of glory,” a picture published by the terror group stated, promising “a terrifying death.”

Meanwhile, Defense Minister Benny Gantz appealed to residents of Gaza in an Arabic-language statement released by the military liaison to the Palestinians in which he commented on the Eid al-Fitr holiday marking the end of Ramadan, which began Wednesday evening.

“The last time we met on Eid al-Fitr I was the chief of staff in [Operation] Protective Edge and Gaza is still trying to recover,” he said, referring to the 2014 war in the territory. “Today I’m the defense minister and if the Hamas violence doesn’t stop, the blow of 2021 will be much tougher and painful than that in 2014.”

He said the leaders of Hamas bore full responsibility for the violence and resulting damage in Gaza.

“They are sacrificing you for their own personal reasons. If in Israel people sleep in protected spaces, Gaza will burn. There is no other equation,” Gantz said.

He added: “The terror groups are presenting a false picture that they’re winning, but they’re not! Some of the people are no longer among the living and they won’t be the last ones to part.”

Smoke and a ball of fire rise above buildings in Khan Younis in the southern Gaza Strip during an Israeli air strike on May 12, 2021, in retaliation to rocket fire by Palestinian terror groups in the coastal enclave. (Said Khatib/AFP)

Earlier Wednesday, Hamas operatives fired an anti-tank guided missile at an IDF jeep on the Gaza border, killing one soldier and injuring two others along with a civilian who helped pull them from the vehicle, according to Israeli authorities.

Immediately after the missile attack, terrorists in the Strip fired waves of mortar shells at the area, around the community of Netiv Ha’asara just north of the Strip, in an apparent effort to keep medical teams and security forces away. 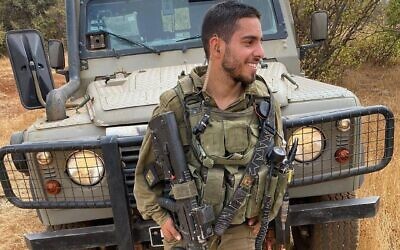 Staff Sgt. Omer Tabib, 21, from the Nahal Infantry Brigade, who was killed when an anti-tank guided missile struck his jeep north of the Gaza Strip on May 12, 2021. (Israel Defense Forces)

The slain soldier was identified as a member of the Nahal Infantry Brigade’s 931st Battalion, Staff Sgt. Omer Tabib, 21, from Elyakim.

The IDF then launched a series of coordinated strikes in Gaza City and Khan Younis, killing four top commanders in Hamas’s military leadership who were associated with its weapons development and production efforts.

“In addition, 10 other operatives from Hamas’s weapons production and research and development department were killed,” the Shin Bet security service said.

The military said the deaths of those 16 Hamas members — four top leaders, two lower-ranking commanders and 10 others — represented a major achievement for Israel in this round of fighting, though Israeli defense officials anticipated that the killings would likely prompt Hamas and the Palestinian Islamic Jihad to renew their attacks on central Israel.

Shortly after the IDF-Shin Bet strikes, Hamas fired dozens of rockets at the cities of Ashdod and Beersheba, as well as the town of Dimona, home to Israel’s main nuclear reactor.

Before the deadly anti-tank guided missile attack, there had been a brief lull in fighting between the two sides on Wednesday morning. Earlier in the day, the IDF launched massive raids on Hamas targets in the Gaza Strip, as terrorists in the Strip fired large barrages of rockets at central and southern Israel, killing an Arab Israeli man, Khalil Awwad, and his teenage daughter Nadeen.

At least six people in Israel were killed — three on Wednesday and three on Tuesday — and dozens more injured in the attacks from Gaza, some seriously, including a 5-year-old girl in critical condition.

As of Wednesday morning, over 1,050 rockets and mortar shells have been fired from the Gaza Strip toward Israel since the outbreak of fighting on Monday evening, according to the IDF.

Roughly 200 of the total number of rockets failed to clear the border and landed inside the enclave, the military said. IDF spokesperson Hidai Zilberman said the Iron Dome air defense system had an interception rate of between 85 and 90 percent for rockets heading toward populated areas. 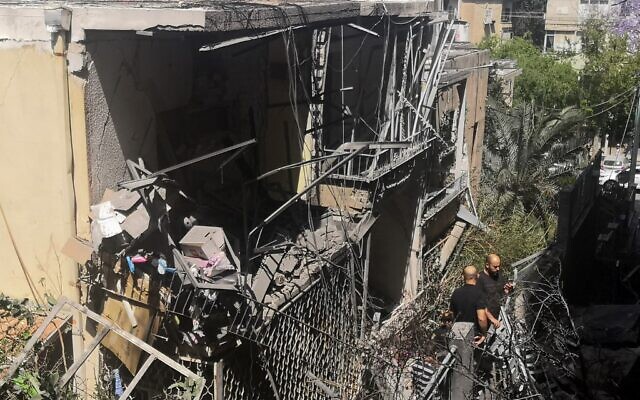 Israelis inspect a damaged house in the Tel Aviv suburb of Givatayim on May 12, 2021, after it was hit by a rocket fired from Palestinian terrorists in the Gaza Strip. (Alexandra Vardi/AFP)

In response to the rocket fire, the IDF launched strikes on upwards of 500 targets in the Gaza Strip, aimed at Hamas personnel, weaponry and infrastructure throughout the enclave, with plans to attack more in the coming hours and days, Zilberman said.

Those included further targeted killings of top Hamas and Palestinian Islamic Jihad commanders and the destruction of a number of high-rise buildings that the IDF said were used by the terror groups as command centers, intelligence bases and weapons research and development facilities, as well as for housing senior members of the terror groups.

According to the Strip’s Hamas-run health ministry, 65 Palestinians have died since Monday night, including 16 minors, and 365 have been wounded. The IDF said more than half of those killed were members of terror groups involved in the fighting and that some, including several of the children, were killed by errant rockets fired from Gaza that fell short of the border and landed inside the Strip, not by Israeli strikes.

The military has also said it was taking steps to avoid Palestinian civilian casualties such as the “knock on the roof” technique. In at least one case on Tuesday, the military actively negotiated with the manager of a building over the amount of time needed to evacuate the structure before the attack.