Tens of thousands of Muslim worshipers attended the first Friday prayers of the holy month of Ramadan at Jerusalem’s Temple Mount, in the largest such gathering since the coronavirus pandemic began.

Sheikh Azzam al-Khatib, head of the Waqf Islamic affairs council, told AFP an estimated 70,000 worshippers came in from Jerusalem, the West Bank and from Arab communities inside Israel.

During last year’s Ramadan, under the pandemic, “they [Israeli authorities] did not allow anyone to enter Al-Aqsa except for me,” he said.

On Friday police shut down roads around Jerusalem as buses loaded with worshipers drove in. But the sprawling plaza of the compound was far from full.

The Coordinator of Government Activities in the Territories, Israel’s military body that administers the West Bank, said 10,000 vaccinated Palestinians had been issued permits this year to enter Jerusalem for prayers.

The Friday prayers were held as tensions climbed in the capital. Police were heavily deployed around the Old City of Jerusalem in anticipation of possible unrest after three consecutive nights of rioting in the area.

The month of Ramadan normally sees increased tensions around Jerusalem’s Old City, which houses the flashpoint Temple Mount site, holy to both Jews and Muslims.

Palestinians take part in the first Friday prayers of the Muslim fasting month of Ramadan, at the Temple Mount in Jerusalem’s Old City, on April 16, 2021. (Ahmad GHARABLI / AFP)

The past three days have seen nightly clashes in East Jerusalem, with tensions flaring over police’s decision to prevent people from sitting on the stairs outside the Damascus Gate, as part of coronavirus restrictions.

The Palestinians were also angered earlier this week after Israel reportedly disconnected the power supply to loudspeakers issuing the Islamic call to prayer on the Temple Mount, during the time that an official Memorial Day service was held in the adjacent Western Wall plaza on Tuesday evening. 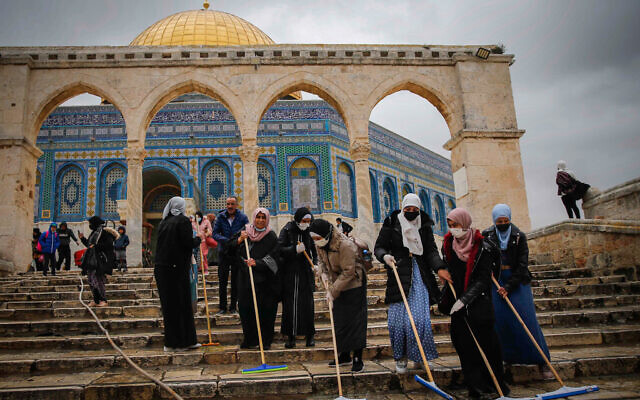 Palestinians clean the floor at the Temple Mount in the Old City of Jerusalem, ahead of the holy month of Ramadan, on April 10, 2021 (Jamal Awad/Flash90)

Tensions are also rising in East Jerusalem over concerns Israel will prevent the area from taking part in the national Palestinian legislative elections scheduled for next month. Israel has cracked down on Palestinian Authority activity inside Jerusalem, considering it a violation of its sovereignty in its capital.

At least two police officers and five civilians were hurt during the East Jerusalem clashes this week, which saw rioters lob firecrackers, rocks and glass bottles at cops and passersby, according to police. 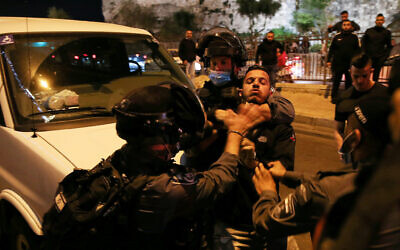 Police spokesman Shimon Cohen said seven people were arrested overnight in Palestinian neighborhoods near the Old City. Those arrested had attacked a police officer, who required medical attention for a head injury, and threw stones and glass bottles, he said.

The Temple Mount has long been a flashpoint, and confrontations there between Palestinians and Israeli security forces have occasionally turned deadly.

Israel captured the compound and the rest of the Old City from Jordan in the 1967 Six Day War, but the Waqf, which is funded and controlled by the Jordanian government, has continued to administer the site. Israeli security forces are present on the Mount and work in coordination with the Waqf. Jews are allowed to visit, but unlike Muslims, are prohibited from praying on Temple Mount grounds.