The Israeli inventor of a “precision medicine” for COVID-19 is “very optimistic,” after an 88-person hospital trial entered its final day without a single patient ending up on a ventilator.

The next phase of the drug trial will see a trial performed with some in a group given a placebo.

After a first trial in Israel, this trial, which will wrap up on Tuesday, is taking place in Greece, sponsored by the government in Athens, involving moderate and serious patients aged up to 85.

Almost 90 percent of them were released within five days, although some remain hospitalized.

The patients were given the inhaled drug EXO-CD24, developed at Tel Aviv’s Ichilov Medical Center.

“Doctors reported good responses, and this is very encouraging and supports our hope that this drug could be a game changer,” the medication’s inventor, senior Ichilov doctor Prof. Nadir Arber, told The Times of Israel.

As well as reporting what appeared to be positive responses, doctors found that none of the patients needed to be intubated and placed on ventilators, and none died, despite the severity of their conditions.

“Patients selected had moderate to high severity disease, and you would expect some would be intubated or stay in hospital for longer,” said Arber.

He stressed that he was not involved in running the trial, which was conducted by Greek doctors and overseen by Dr. Sotiris Tsiodras, the national coronavirus commissioner for Greece.

Arber acknowledged that firm conclusions can’t be drawn until the trial is followed up by testing that involves a group with some patients being given a placebo for comparison.

“As much as we are optimistic now, there must be a placebo trial,” Arber said.

The drug tackles the coronavirus using a molecule, CD24, that Arber spent 25 years researching in the hope it would help cancer patients.

In February, the approach impressed visiting Greek Prime Minister Kyriakos Mitsotakis, who decided to initiate and sponsor the trial in Greece.

Ichilov has since teamed up with an Israeli pharmaceutical company to advance the testing process. 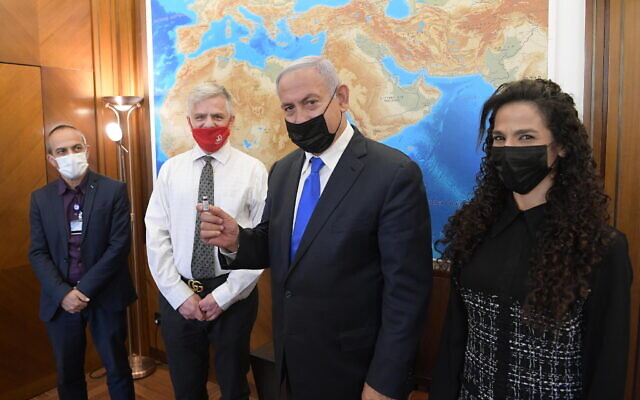 Arber thinks that the big advantage of his drug over steroids, which are now commonly given to coronavirus patients, is that it doesn’t impact the immune system as a whole but rather takes a “precision” approach.