Alma via JTA — “The Last of Us Part II” is a heart-wrenching story of revenge and loss set in a post-apocalyptic America. Released in 2020, it quickly became the most awarded game of all time. While playing through its 25 hours of content, players encounter brash violence — there are Molotov cocktails and mutated monsters — but the adventure shines brightest in its quiet moments, when the humanity of the characters emerges from the ominous setting.

One highlight for me can be found in a chapter with Dina, the Jewish girlfriend of protagonist Ellie Williams. Dina joins Ellie in her quest for revenge that propels “The Last of Us Part II,” and early on they venture through abandoned storefronts in search of gasoline to open a gate. The quest takes them to a location I found to be an unexpected delight: an abandoned synagogue.

With light flooding through the stained-glass windows and overgrown greenery unifying the synagogue with its surroundings, the setting doesn’t feel out of place from the game. Rather it serves as a safe haven after exploring areas crawling with zombies.

“Hey Ellie, this place is a synagogue,” Dina warmly remarks upon their entrance.

One of the most endearing aspects to the original “The Last of Us” game was a 14-year-old Ellie questioning her father figure, Joel, on aspects of life before the apocalyptic outbreak. She’s amazed the first time she sees lightning bugs and speaks of college like a foreign concept — but approaches all these unfamiliar ideas with genuine curiosity. The Ellie in the sequel is hardened, but her young, quizzical self peeks through as she inquires about her partner’s faith: “5774? Are we in the future?” Dina jokes in reply, “No, doofus, that’s a Hebrew calendar.”

The moment that hit closest to home was one line from Dina: “For the new year my sister used to give me an apple dipped in honey.” Though they are living in an apocalyptic world overrun by zombies, Dina’s Jewishness feels so real. The apples-and-honey line in particular made me realize I had never seen a Jewish character in a video game that I could relate to before now.

While Dina says she wouldn’t describe herself as a believer, she explains that her faith is a source of comfort and a way to deal with grief. Unlike many past depictions of Jewish people in games, Dina is not reduced to her religion. Dina’s Jewishness is a piece of her background that aids in understanding her perspective as the story progresses.

Inspired by Dina, I did a deep dive into video game history to catalog the good, the bad and the questionable representation found in the medium. From a cult classic indie game centering on a rabbi to Orthodox Jewish background characters in Marvel’s Spider-Man to simulations of antisemitic violence developed by hate groups, here’s a timeline spanning from 1992 to the present day.

B.J. is the central protagonist of the “Wolfenstein” series: the son of Polish immigrants, a World War II sergeant in the US Army and an agent at the fictional US Office of Secret Actions. He is an antifascist who aims to take down the Nazi regime: “I’ve got kids on the way, and I’ll be damned if I’m gonna raise them in a world run by these Nazi assholes.” The game is a bloody first-person shooter with likely the most prominent Jewish protagonist in video game history. B.J.’s Jewish background was confirmed by game designer Tom Hall, both on Twitter in 2014 and through revealing his mother’s identity in The New Colossus (2017).

“Metal Gear Solid” is an acclaimed game by Hideo Kojima that helped to popularize stealth gameplay and cinematic cutscenes. It features the canonically Jewish Dr. Hal Emmerich, a scientific prodigy, weapons developer and lover of anime. Emmerich’s identity was confirmed in the Metal Gear Solid Official Mission Handbook (see page 19). Another “Metal Gear Solid” character, Meryl Silverburgh, a fighter from a military family who serves as righthand woman to protagonist Solid Snake, is thought to be Jewish by many due to her name. However, her faith has never been stated and, unlike Emmerich, her nationality in the handbook is listed simply as “American” rather than “American (Jewish).”

Freeman falls into the Silverburgh category: Many have assumed the “Half Life” hero’s Jewish background based on his name. Freeman, a theoretical physicist, is joined by several other characters, including Dr. Kleiner and Judith Mossman, whose names may also indicate Jewish backgrounds as they stand against a fascist empire called Combine. While these characters’ faiths are not confirmed, the possibility adds interesting depth to the narrative.

I couldn’t cover the scope of depictions of Jewish people in video games without noting how the medium has been weaponized at times to simulate antisemitic violence. This is perhaps most dramatically displayed by the 2002 game “Ethnic Cleansing,” created by the neo-Nazi organization National Alliance, which is … exactly what it sounds like. It is essentially a reverse Wolfenstein game where rather than fighting the Nazis, you are the Nazi. For obvious reasons this falls into the straight-up bad representation (if you can even call it that) category.

The bestselling “Grand Theft Auto” series, known for its gaudiness and open world accomplishments, features a handful of Jewish characters. Rosenberg is a central character in both Vice City and San Andreas, a lawyer with ties to an Italian-American mob. Klebitz, another recurring character, is the leader of an outlaw motorcycle gang who rides a signature blue and white bike meant to reference the Israeli flag. Roth and Green are members of a Jewish mob who trade diamonds. *Spoiler alert* Some controversy arose as two of the series’ protagonists kill Roth, Green and their fellow diamond dealers. The final mission where the player kills Roth sees him described as a “curly haired leech” and requires that the player murder members of the Jewish mob. 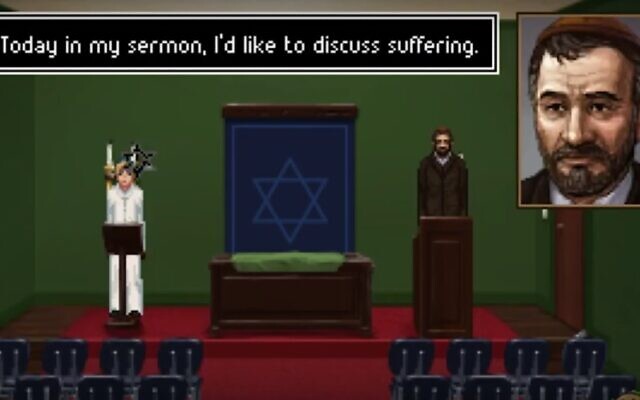 Screenshot from ‘The Shivah.’ (Screenshot)

The most obviously Jewish game on this list is “The Shivah,” an indie point and click title with branching dialogue where the protagonist is literally a rabbi. Rabbi Stone’s synagogue is running low on funds when he learns a congregant has passed away, leaving $10,000 for him. Stone ventures through Manhattan on a journey full of lighthearted and introspective dialogue to determine if it is moral to accept the funds. Bonus points: The game features a cheat sheet of Yiddish translations.

The hero of Nintendo’s successful “Professor Layton” series is Hershel, a puzzle-solving British Jewish archaeologist. OK, his religion isn’t discussed in the game, but the Hebrew origins of his name and his choice of hat have led many to draw the conclusion.

“BioShock” is a first-person shooter where you play as Jack, a survivor of a plane crash who stumbles upon an underwater city in 1960. It features the most Jewish cast in gaming — certainly at the time, and possibly to this day. Ken Levine, the mind behind the game, opened up about its Jewish roots in a 2015 interview and later in 2018.

“I don’t think I was conscious of how Jewish it was until afterwards,” he said, explaining that much of the representation was a byproduct of his childhood experiences. 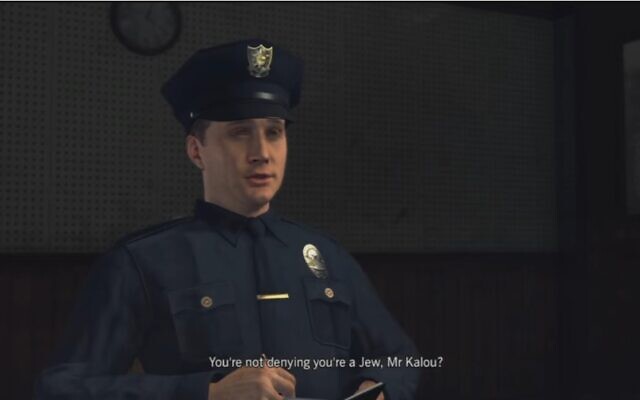 The protagonist is Detective Cole Phelps of the Los Angeles Police Department in 1947. The player acts as Phelps while solving a variety of cases. *Spoiler alert* One centers on Edgar Kalou, a jewelry store owner who kills Everett Gage, an antisemite who worked to take down his business. While questioning Kalou, Phelps gets a confession by making antisemitic remarks, saying “You’re going to the gas chamber, Edgar” and calling him a “left-wing-leaning parasite.” Kalou accuses Phelps of antisemitism and calls him a “goy motherfucker.” After the confession, Phelps says, “I respect your beliefs and the right to hold them,” which rings hollow after he threatens to send a Jewish man to the gas chamber. I’m left feeling he didn’t need to use aggressive antisemitism as a tool to gain a confession when he already had ample evidence of guilt.

Gaige is a playable character in the “Borderlands” series, a rebellious blogger and scientist whose signature skill is summoning Deathtrap, a robot she created to defend her. She sometimes open chests while exclaiming “It’s like Hanukkah!” a play on the character Roland’s line, “It’s like Christmas!” The series also features Typhon Deleon, a character who frequently uses Yiddish.

Yes, that Joel, the treasured smuggler and ultimate father figure protagonist of “The Last of Us.” While his faith is not discussed in the game as Dina’s is in the sequel, many have concluded he at least celebrates Hanukkah from developer Naughty Dog’s 2013 holiday card depicting the character in a menorah sweater. Does that mean Joel is canonically Jewish? Why not! 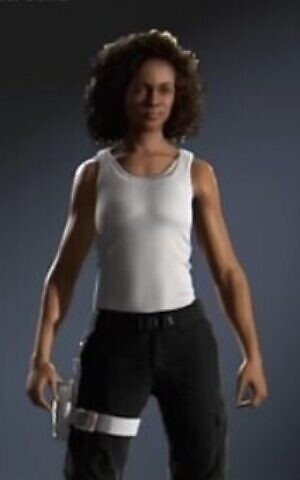 The character of Nadine Ross from ‘Uncharted: Lost Legacy.’ (Screenshot)

Zussman is the fiercely loyal sidekick to protagonist Ronald “Red” Daniels. Raised by a German-Jewish family in Chicago, Zussman faces unique struggles in battle due to his identity as he is captured by German soldiers.

I am indeed including the Jewish background characters in Spider-Man because of this lovely attention to detail: On Saturdays, the Orthodox Jewish character models are not seen at work because they are observing the Sabbath. Elan Ruskin, a programmer at Insomniac Games, tweeted, “I spent months bugging the character art lead to create Orthodox models just so that I could implement this.” From gaming Jews everywhere, thank you, Elan Ruskin. Sometimes it’s the little things. Also worth mentioning, while swinging around the 2020 follow-up game, “Spider-Man: Miles Morales,” NPCs will shout out holiday greetings that include “Happy Hanukkah!” — I lit up upon hearing it for the first time. 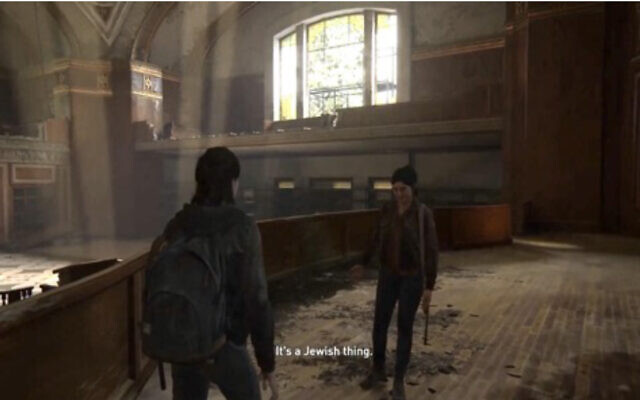 A screenshot from ‘The Last of Us Part II.’ (Alma via JTA)

This all takes us back to Dina, perhaps the most fleshed-out direct Jewish representation in a AAA game.

“I like coming from a long line of survivors,” Dina proudly states, explaining her family survived the Inquisition and the Holocaust, and that she now carries their legacy as she fights to survive. Her Judaism is brought up naturally and connects to the story in a meaningful way. Throughout the game Dina wears a bracelet with a hamsa charm that she ultimately gives to Ellie, saying “It’s for good luck.”

While Jewish representation in video games has a rocky and sparse history, games like “BioShock,” Marvel’s “Spider-Man” and “The Last of Us Part II” have demonstrated differing ways to effectively include the faith on large and small scales. The common thread in these games is having a seat at the table. In the case of “BioShock,” developer Ken Levine’s roots drive the inclusion; in “Spider-Man,” it is Elan Ruskin pushing the character artists to include Orthodox models; and in “The Last of Us Part II,” writer and director Neil Druckmann’s background inspires the inclusion.

As the video game industry grows to be more inclusive behind the scenes, we can expect games increasingly representative of nuanced and complex characters from all walks of life.