JTA — The doctor burst into public view in the pandemic’s early days, vaulting from behind the scenes to the front lines of a crisis bringing his community to its knees. In Jewish communities across the New York region and beyond, members hung on his every word and changed their behavior because of him.

Seven months later, he still has his adherents, but he also knows that weighing in about ways to curb the spread of COVID-19 comes with a cost — from being dismissed at best to facing violent threats from people who are tired of restrictions as the pandemic wears on. He’s still speaking out, but increasingly to a smaller group of people who hardly need to be reminded to wear masks and socially distance while those who have relaxed their behavior are no longer listening.

It’s not just Anthony Fauci. It’s Aaron Glatt, Avi Rosenberg, Stuart Ditchek and others — Orthodox Jewish doctors who emerged as beacons of science and sanity at a terrifying time, but now face a community where resistance and disinformation are becoming more prevalent just as cases are rising to record numbers across the country.

Ditchek said he’d heard people refer to him and several other Orthodox doctors as the “Jewish Faucis,” though he was a bit sheepish about the comparison.

“I assure you that my qualifications and intellect are not on a level anywhere close to Dr. Anthony Fauci,” he said, noting his admiration for the infectious diseases expert. “We are just fulfilling our responsibilities to help save lives.”

Orthodox doctors living in Orthodox communities have served in a number of new roles over the course of the past six months — providing medical guidance to COVID patients far beyond the confines of their day jobs, advising on quarantine procedures and shaping policies for camps and schools to reopen. And now they’re dealing with a threat nearly on par with the threat posed by the disease itself: the spread of disinformation and distrust of the medical establishment in a community that is ready for a return to normality.

For Orthodox doctors, it’s not uncommon during normal times to get calls or a knock on the door on Shabbat from a community member with a medical question.

But the requests for advice skyrocketed this spring, as the pandemic descended on the United States. By how much? “Certainly a hundred-fold would not be incorrect,” said Dr. Aaron Glatt, the chief of infectious diseases and hospital epidemiologist at Mount Sinai South Nassau on Long Island and an assistant rabbi at the Young Israel of Woodmere, a large Orthodox synagogue.

As the calls and emails increased, Glatt said, community members and local rabbis asked him to provide regular updates to his community in the Five Towns on Long Island, one of the largest Orthodox communities in the New York area. Soon he was giving weekly Zoom updates on Saturday nights that attracted as many as 1,000 people, with thousands more watching on YouTube, and sending out written updates and guidance to a listserv.

Glatt, who is both a rabbi and a doctor, frequently lamented that his COVID updates drew greater attendance than a Torah class would.

“If a vaccine comes out, then b’ezras hashem [with God’s help] I’m out of business on these Saturday nights,” he said in his September 5 update. “I would like to reserve it to give a shiur [class] instead on some wonderful Torah subject and would love to see a thousand people come in for that rather than the numbers that we’ve had for some other shiurim [classes,] but that’s a wishful thought.”

But around the same time as that address, pushback against Glatt’s recommendations began brewing in his community. Weddings were being held with long guest lists again and shared Shabbat meals were resuming. A group of 100 doctors in the Long Island community, including Glatt, published a letter asking the community to continue placing their trust in the local doctors after they noticed the widespread relaxing of mask wearing and social distancing. At the time, one of the initiators of the letter cited local influential people who were fomenting anti-mask resistance in the community. 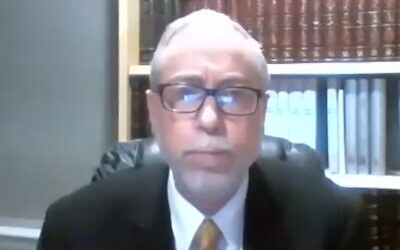 Then in late September, an anonymous letter circulated on social media accusing Glatt of promoting masks as “magic” and of leading a “cult.”

“We are upset because you only seem to care about COVID itself and the elderly and vulnerable,” the anonymous authors wrote. “Much the same way that Fauci espouses policy based upon COVID public health alone, you too seem to ignore many aspects of the effects of COVID and government lockdowns on our lives.”

To Glatt, the personal attacks on him are not what worried him the most. It was the message the letter sent to community members who were trying to follow public health guidance. “I’m more upset about that than anything else, that they’re convincing people unfortunately who are otherwise doing the right thing to now do the wrong thing,” he said.

On Sunday, local activists gathered for a rally advocating for religious freedom and in support of Donald Trump. Speakers advocated for hydroxychloroquine, a drug that was used earlier in the pandemic to treat COVID but was later found to be ineffective, and questioned the efficacy of masks and COVID testing.

“I would say 99% of the people have been very kind, they’ve been very nice and they have expressed thanks and just been very nice, that’s the vast vast majority,” Glatt said. The anonymous letter, he said, “was the first time of anything of that nature.”

Dr. Stuart Ditchek, a pediatrician in Brooklyn’s Midwood section, said he was appalled by the letter attacking Glatt but noted that many of the critics of Orthodox doctors have chosen to remain anonymous.

“Those voices are few…they’re never with names,” Ditchek said. “I will tell you that all of the frum [observant] physicians I know…they all put their names to whatever advisory we put out.” 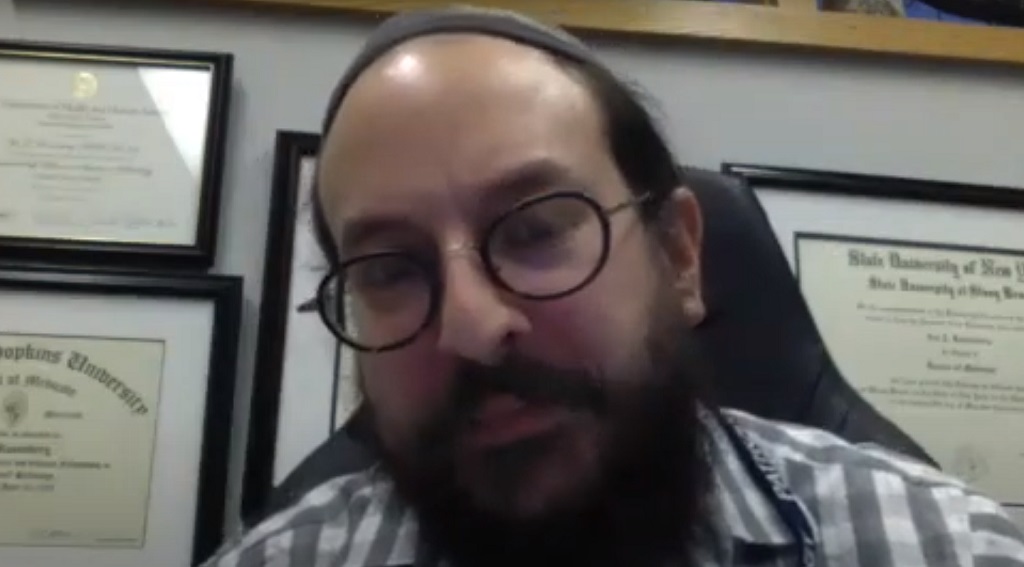 Ditchek also began giving video updates on the threat of COVID and the steps needed to prevent its spread in the Orthodox community back in March. He issued early warnings in New York City, urging schools and synagogues to close before Purim, the holiday in March when many in New York’s Orthodox communities celebrated and likely contracted the virus.

To the pediatrician, who formerly had little public profile beyond his own practice and the nonprofit he runs benefiting children with life-threatening or life-shortening illnesses, it was important to have local doctors speaking to community members with whom they already had a high level of trust.

“Every frum physician has to do this, they have to engage locally,” he said. “The only way to solve this problem within the communities is to educate within our own communities because they trust us and we have so many relationships.”

For Dr. Avi Rosenberg, a renal pathologist at Johns Hopkins University in Baltimore, Maryland, one of the most important reasons to have Orthodox doctors advising Orthodox communities was to ensure culturally appropriate guidance was given. When it came to advising camps and schools on how to reopen safely, that knowledge of the Orthodox community was key.

“There were a lot of nuanced questions that were well beyond the cultural resonance of guidelines from the CDC and local DOH,” Rosenberg said, noting the unique circumstances of how yeshiva students study in pairs, often arguing loudly over a gemara, or the fact that an infection in one large Orthodox family with many children could easily cause closures in multiple schools.

“I’ve worked with DOH’s around the country at this point and they’ve all been tremendously appreciative to have grassroots physicians involved in designing strategies for environments that they can’t fathom,” Rosenberg said.

Early on in the pandemic, he started a WhatsApp group for Orthodox doctors in his community in Baltimore that quickly became a place to share information about transmission of the disease in the local community. He also became active in another group — called OrthoDOCS, with more than 150 doctors across the country — where physicians shared information about the disease, how to treat it and what was working to contain the spread in their communities.

“Why should we all be remaking the wheel every single time?” Rosenberg asked. “I think it’s pretty unique to what we as a community have done and I wouldn’t even know how you would organize this outside of a community setting.”

But just as in Glatt’s community, Rosenberg, too, started noticing a diminished level of trust in Orthodox doctors among the people he was advising toward the end of the summer. Whereas people who would call him with questions about COVID had previously accepted his advice almost without question, suddenly he was getting pushback from people who were basing their skepticism of medical guidance on unreliable sources or hearsay.

To Rosenberg, the breakdown of trust in scientists and doctors came because of the quiet summer when there were few new COVID cases in many Orthodox communities. That lull took place while politicization of the virus in America increased.

He said the annual period of ritual mourning over the summer called “the three weeks” was the “reset switch” that led to new outbreaks in Orthodox communities up and down the East Coast beginning in mid- to late August. “The amnesia was incredible,” he said.

Right now it’s basically a pro-Trump dance party. Lots of media here after last night’s violence, but no sign of similar chaos (though someone was chucking eggs a few minutes ago) pic.twitter.com/FJUZ5xpIm9

“People were starting to celebrate their simchas [celebrations] in full fashion and there were those of us who said it’s a bad idea, and people looked around and said but there’s nothing, look there’s nothing. And as the political tone shifted up in the country, it all coalesced into the situation that we saw,” he said.

Ditchek noticed the change, too, and attributed it to the evolving medical guidelines as the scientific and medical community’s understanding of COVID developed. Even people who would normally have listened to the doctors’ advice were confused by the frequently changing advice.

“People misunderstand changes, changes in the direction of the science of COVID, with some kind of scientific error,” Ditchek said. “What we failed to explain as a physician community was that because the scientific discoveries were taking place at such rapid sequence, it was inevitable that we would have to change directions at some point and I think the masks were a perfect example.”

Now that treatment has improved for COVID patients, the protocols have changed again. Unlike at the beginning of the pandemic when some hospitals were overrun and doctors were ill-equipped to treat people for a new disease for which there were few known treatments, doctors are now advising COVID patients to go to the hospital immediately if their situation deteriorates.

While Ditchek himself was a proponent of keeping people at home earlier in the pandemic when hospitals had fewer therapies to offer — he helped arrange oxygen concentrators for people to use at home so they could avoid going to the hospital for as long as possible — he believes it’s now critical to make sure people know about the new protocol, even if it is confusing and time-consuming.

“It’s very reflective of what we’ve struggled with, but I’m not embarrassed about having to modify my opinion,” he said. “Because I know it’s going to save lives.”