I’m not sure outgoing President Reuven Rivlin, at 81, wants to take on another major public role after seven years as a sort of combined national conscience and comforter. But I have a job for him if he does.

The avuncular Rivlin, whose terms ended Wednesday with the swearing-in of President Isaac Herzog, exuded a love for Israel and its people, and an optimism for our future. He identified four major “tribes” in Israeli society — secular, national-religious, ultra-Orthodox and Arab — and worked to encourage greater harmony among them. He spoke out on behalf of marginalized and victimized sectors of our demographic, and defended our core establishments from partisan assault.

He went to the very limits of what is intended to be a largely ceremonial role — perhaps most dramatically when he declaring “I fear for my country” in assigning his former Likud colleague Benjamin Netanyahu to put together a government just three months ago.

A self-described utopianist, he allowed himself the luxury — as national figurehead rather than party politician — of highlighting Israel’s rights to the biblical Judea and Samaria while simultaneously insisting that the country maintain its democracy.

In short, quite the balancing act.

So maybe he’d like to repeat the trick, in the context of Israel-Diaspora relations.

Global communication may be smoother than ever, but the people of the Jewish state and the Jews who live outside its borders are drifting apart. More than seven decades after Israel’s founding, that may be partially unavoidable; generations of Jews have now had a choice over whether to live in Israel, and the priorities of the state and of world Jewry are manifestly not always going to be the same.

Diaspora Jewry should not be prescribing Israeli security and diplomatic policy. The government of Israel should not be the arbiter in matters of the Jewish faith. But the Jewish nation worldwide should be pooling its combined wisdom and enterprise far more effectively than is currently the case

What we lack is a serious, empowered forum to enable better interaction between these Jewish worlds — to understand each other better, to thrash out our differences, to ensure a whole that is greater than the sum of its parts.

Diaspora Jewry should not be prescribing Israeli security and diplomatic policy. The government of Israel should not be the arbiter in matters of the Jewish faith. But the Jewish nation worldwide should be pooling its combined wisdom and enterprise far more effectively than is currently the case. This applies especially on those issues that are least consensual — notably including issues where actions Israel considers vital to its well-being adversely affect the Diaspora, and vice versa.

To give only a single, very recent example, May’s 11-day conflict between Hamas and Israel triggered horrifying spikes in antisemitism in many parts of the Jewish world. I’m far from certain that Israel’s political leaders fully internalized just how horrifying. I’m far from certain that Diaspora Jewry fully comprehends the amorality of the terrorist quasi-states we face on two borders.

There will be further such conflicts, posing further challenges and dilemmas for Israel and world Jewry. We urgently need to help each other meet them. 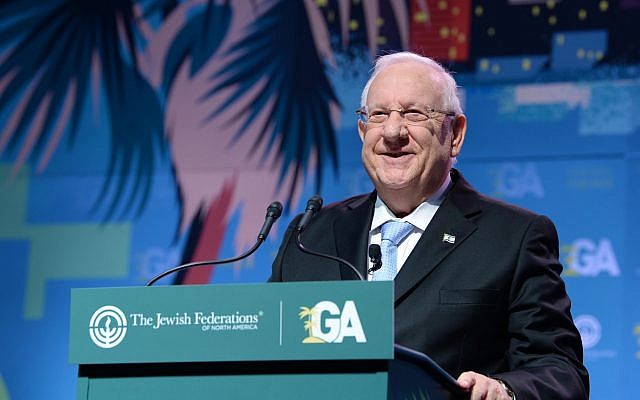 President Reuven Rivlin speaks during a conference of the General Assembly of the Jewish Federations of North America in Los Angeles, on November 14, 2017 (Mark Neyman/GPO)

The makeup of such a forum, its powers and authority, how it would interact with Israel’s government and the existing Diaspora establishment — these are complex questions that underline the need for a figure of stature and experience to set the ball rolling.

A figure, perhaps, long committed to improving Israel-Diaspora ties, a prime mover in the “Our Common Destiny” initiative, a leader who has frequently described Diaspora Jewry as his “fifth tribe.” A former president who stressed the need for “mutual responsibility” among all Jews everywhere — “a commitment to the security and the well-being of all our people,” a commitment “stronger than any disagreements.”

Over to you, citizen Rivlin?

** This Editor’s Note was sent out Wednesday in ToI’s weekly update email to members of the Times of Israel Community. To receive these Editor’s Notes as they’re released, join the ToI Community here.