MOUNT MERON, Northern Galilee — There are three exits from the venue on Mount Meron where tens of thousands of men and boys celebrated the ceremonial lighting of a massive torch for the holiday of Lag B’Omer at midnight on Thursday. And one of them, the southern exit, is a death trap.

Each year, hundreds of thousands of people flock to the tomb of Rabbi Shimon Bar Yochai on the eastern slope of Mount Meron in northern Israel. Bar Yochai, known by his acronym Rashbi, was a famed rabbinic commentator from the 2nd century, who is generally believed to have died on Lag B’Omer and called for his followers to celebrate the anniversary of his death, a tradition known as Yom Hillula, or day of festivity.

At Mount Meron, the holiday is marked with ceremonial lightings of massive torches by various Hasidic sects, complete with music and dancing and general revelry. The torch-lightings are held throughout the night — beginning at nightfall and continuing through 4 a.m. — in six compounds surrounding the tomb, large areas with bleachers, a stage, sound system and a giant metal torch.

On the night of Lag B’Omer, the compound was filled to the brim with revelers, the vast majority of them ultra-Orthodox, or Haredi. On Sunday the site was mostly empty, with workers breaking down the makeshift stages and seating and a few dozen people still milling around the tomb, arguing with anyone who would listen about who was responsible for Israel’s most deadly peacetime civilian disaster.

Marked with a green and white “Emergency Exit” sign, egress from the Toldot Aharon compound is a perilously steep concrete ramp less than 10 feet (three meters) wide. The right half of the ramp is covered in metal plates with strips of what was once friction tape for better traction, but that has become so caked in mud and grime that it is now slicker than the exposed steel itself.

A photograph taken on May 2, 2021, of a pathway where 45 people were killed in a deadly crush at Mount Meron three days prior. (Judah Ari Gross/Times of Israel)

Directly at the bottom of this ramp is a wall, so to leave you have to make a right turn and go down an uneven set of concrete stairs, from which bits of rebar and metal plates occasionally jut out.

Down these stairs is yet another wall and to the left is a narrow, covered walkway leading outside. On the night of the disaster, barricades had been set up at the bottom of the stairs. They were meant to help control the flow of visitors, but instead the metal barricades kept masses of people pinned inside, where they piled upon one another.

The exit stairs were covered in candles on Sunday, some arranged in the shape of the number 45 — for the 45 people, many of them children, who didn’t make it out to that covered walkway, who were crushed to death on the stairs as masses of people fell on and trampled one another at 1 a.m. Friday.

Over the course of just half an hour on Sunday morning, this reporter witnessed no fewer than five people — walking slowly and with no interference — slip and nearly fall on the steep ramp and rutty stairs. “Careful, we don’t need another disaster,” one person said to a man who almost tumbled down the stairs. Another man who nearly lost his footing on the slippery ramp shook his finger at the flooring with a grimace.

This was the exit for tens of thousands of frenzied revelers, high on religious ecstasy on Thursday night. Videos from the scene show thousands of people crammed into this narrow, slick walkway, slipping and pushing against one another, as police try to rip off the sheet metal surrounding the ramp to make more space.

In some of the more graphic footage from that night, which The Times of Israel has decided not to publish, police and rescue workers can be seen trying to drag people out of the crush — people pinned at the bottom of a pile of writhing bodies, struggling to breathe and begging to be pulled out.

According to Rabbi Mordechai Halperin of the Meron Council, one of the groups responsible for the Lag B’Omer event, the ramp and stairs were built five years ago without proper building permits.

“How are you going to have a ramp with a slope like this, ending in a wall?” Halperin told The Times of Israel, looking down at the exit bitterly. 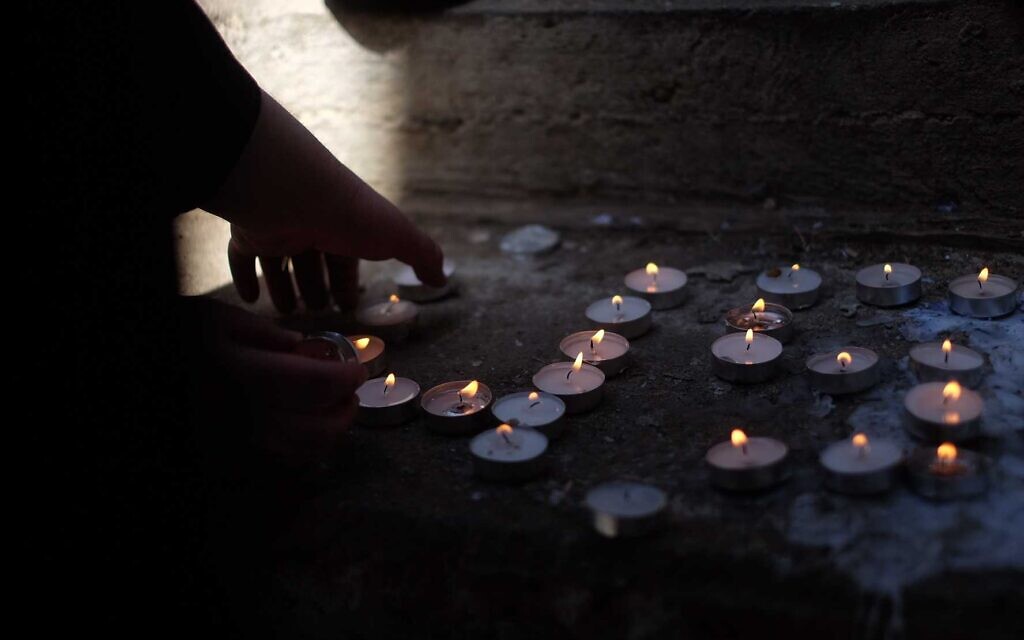 A man lights candles arranged in the shape of the number 45 on May 2, 2021, in honor of the 45 people killed in a deadly crush at Mount Meron three days prior. (Judah Ari Gross/Times of Israel)

A senior engineer for the Ministry of Religious Affairs officially signed off on the safety of the site before the event, but according to Halperin this is an exceedingly perfunctory step, one that would not have ended with anything but approval for the festivities.

“He gives his bill and signs his name on the form,” said Halperin, a somewhat controversial figure in the Meron community.

On Sunday, a team from the Justice Ministry’s Police Investigations Unit, which officially launched a probe into the disaster that day, visited the site, paying particular attention to the ramp and measuring its dimensions. 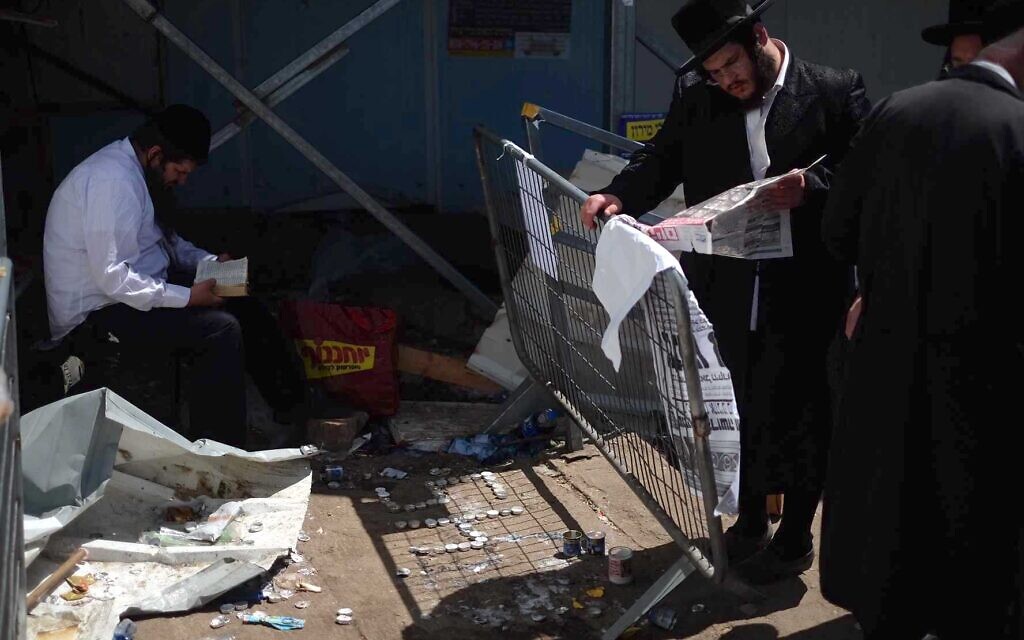 A photograph taken on May 2, 2021, of a man holding a vigil on the pathway where 45 people were killed in a deadly crush at Mount Meron three days prior while another looks at the photographs of the deceased. (Judah Ari Gross/Times of Israel)

According to Halperin, the exit ramp was added during a renovation after a fire broke out at the compound some four and a half years ago.

Normally, the Toldot Aharon sect does not participate in the festivities on the night of Lag B’Omer, and instead finishes off the celebrations by lighting its torch at the end of the holiday on the following day. But this year, because the day after Lag B’Omer was Shabbat, when observant Jews do not light fires, the sect participated in the main event, lighting its torch at midnight.

The precise catalyst for the catastrophe is still being investigated, but it appears that there was some obstruction in the pathway leading out of the southern exit, causing a lethal pile-up in which the 45 men and boys were trampled to death and dozens of others were injured, some seriously. By Sunday, almost all of the wounded had been released home — with broken bones, bruises and other orthopedic issues — but a small number with more serious injuries remained hospitalized.

The risks associated with the Yom Hillula at Mount Meron are well documented, with Knesset hearings, state comptroller reports and untold media interviews in recent years warning that the Lag B’Omer festivities are unsafe — far too many people in far too small a space, with woefully insufficient infrastructure and safety precautions. All this is compounded by the fact that no one organization is responsible for overseeing and managing the event.

Long-time attendees and organizers of the event describe it as “nothing short of a miracle” that such a catastrophe never occurred before.

In the days following last week’s disaster, politicians, religious figures and civil servants have taken to playing the “blame game” of denying their own responsibility, playing up their documented apprehensions about the event and accusing others of being the true address for blame. Generally, they’ve also couched their comments in the context of now not being a time to point fingers but, rather, to come together to mourn.

The police specifically are being accused of unintentionally causing the initial obstruction by having placed barriers near the southern exit, but it’s not clear that this alone caused the crush.

With the steep angle of the ramp, the slick flooring and the tortuous exit route, indeed, the number of dead and injured could have easily been far higher.