NEW YORK — Only a week after she and her husband moved to New York, London native Annie Cohen put the boxes and furniture assembly aside to take a seven-day retreat in upstate New York where she could speak Yiddish.

“I think I have a Yiddish problem, I love Yiddish too much,” Cohen joked on the first day of Trip to Yiddishland, a camp for Yiddish enthusiasts run by The Workers Circle.

Yiddishland, as it’s known for short, was launched 14 years ago and takes place at Circle Lodge in Sylvan Lake, New York, about 30 minutes southeast of Poughkeepsie. The campsite is a green 100-acre space on the lakeshore with swimming pools, tennis and basketball courts, gyms and theaters, among other amenities. Although somewhat run-down, the cabins and bungalows scattered around the property look like they came right out of the Catskills of yesteryear. All around, there is the soothing sound of crickets and birds chirping.

Every year, some 200 people of all ages come to spend the week at Yiddishland, taking part in language classes as well as dance, theatre, and klezmer workshops, concerts, and children’s programming. Yiddish classes are divided into beginner, intermediate and advanced groups to serve attendees on all skill levels.

Workers Circle CEO Ann Toback told The Times of Israel that the camp and lodge were built by Workmen’s Circle in the 1920s to give newcomers from Eastern Europe a place to stay in the summertime, part of the group’s larger mission to help the immigrants integrate into American society. By the 1990s, the camp was hosting weekly retreats throughout the summer, with some guests staying for months at a time.

“One of the weeks was always Yiddish-focused, so that became Yiddishland,” Toback said. “So really, Yiddishland has been happening for decades, but Yiddishland as a week-long retreat is now 14 years old.”

The yearly event, she said, is “a deep dive into our culture and heritage.”

Not entirely lost nor forgotten

For Cohen, who just moved to the United States from France, Yiddishland was a bucket list item. The 35-year-old has been studying Yiddish intensively for the last few years.

“Apparently my grandmother spoke Yiddish, but she died when I was a year old,” Cohen said. “My dad doesn’t speak it, but it’s in my family.”

At university, Cohen studied Jewish history and began researching Jewish volunteers who went to fight in the Spanish civil war.

When I started learning, I just fell in love with it

“A lot of them spoke Yiddish, and my supervisor told me, ‘Well, you need to learn Yiddish to research this.’ When I started learning, I just fell in love with it,” she said.

Workers Circle director of Yiddish programming Kolya Borodulin has been running the Yiddishland language program since its inception 14 years ago. With morning classes underway across the camp, he prepared for the day’s upcoming activities.

Borodulin grew up in Birobidzhan, the administrative center of the Jewish Autonomous Region in Russia, where Yiddish is the official language. Despite that, he knew “almost nothing” of Yiddish culture. It was only when he came to New York that Borodulin started getting into it, and now he says he “can’t stop.” 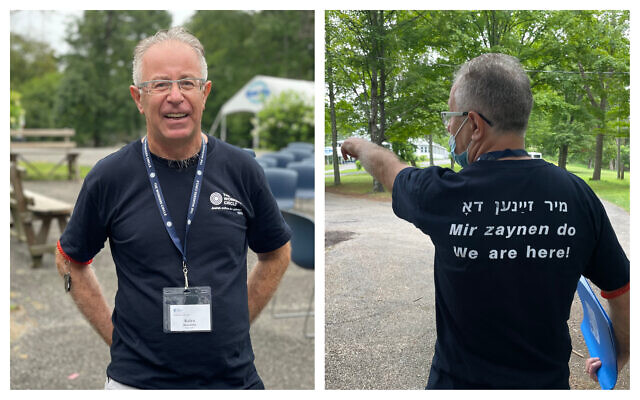 “It means the world to me,” he said while walking around the property, sporting a shirt with the Yiddish phrase “Mir zaynen do,” or, “We are here,” emblazoned across the back.

Yiddish, Borodulin said, is “very important because it is an inseparable part of our heritage, of our legacy.”

“It is very moving because many people associate it with the Holocaust and 6 million people who died, and most of them were Yiddish speakers — so just because of this you have to remember and you have to continue,” Borodulin said. “You have to carry on and you have to inspire, because there is so much to inspire with.”

Over lunch in the dining hall, 92-year-old Golda Shore said that she has never missed a Trip to Yiddishland. Every year, she flies to New York from her home in Florida for the occasion, she said. For her, “it’s almost like coming home.” 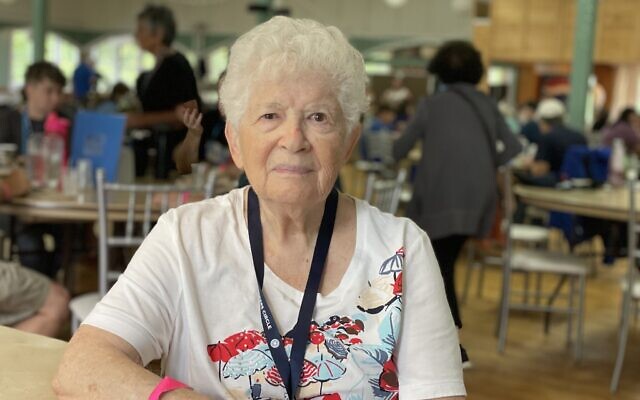 92-year-old Golda Shore at Yiddishland, August 2021. Shore flies from her home in Florida to New York each year to attend the retreat. (Danielle Ziri)

“From the very morning when you have breakfast it becomes like an extended family,” Shore said. “I know almost everybody that comes. There are new people every year, and the quality of teachers that they have is just amazing.”

Shore was born in the US in 1928 to European Jewish immigrants. Her parents spoke Yiddish in the house and she was enrolled in Yiddish education programs throughout her schooling.

“It’s second nature to me,” she said. “It’s the culture, the music, the folk dancing, the singing, the choral singing, it’s everything.”

“I think some of this interest that I have is what keeps me alive,” Shore believes. “It’s something I look forward to every year.”

Getting younger year after year

Every morning, attendees at Yiddishland are greeted by the enthusiastic voice of 8-year-old Dinah Slepovitch.

“I’ve been here since I was two or three,” Slepovitch said. “It feels really great, I feel like I’m back at home.”

Although most of the attendees at Yiddishland are seniors, every year, younger Yiddish enthusiasts join the retreat. 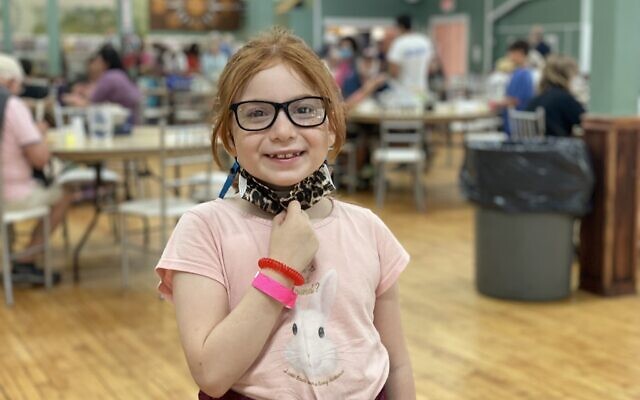 8-year-old Dinah Slepovitch has greeted Yiddishland attendees each morning for the last five years, and continues to do so in August 2021. (Danielle Ziri)

“This year is very special because I’ve never seen so many young people here,” Borodulin said. “This is our goal — to bring more young people and to introduce them to this beautiful, amazing, precious Yiddish culture.”

Yiddish is still spoken in some Orthodox Jewish communities around the world, but it has also seen somewhat of a comeback in recent years in areas ranging from literature to theater. Shows such as the much-acclaimed off-Broadway “Fiddler on the Roof” in Yiddish have helped the language get a foothold in the cultural mainstream.

Toback believes that this Yiddish renaissance is due to the fact that young people are now getting more and more interested in their roots.

“We’re now 75 years from the liberation of Auschwitz and it’s almost like people are starting to get more comfortable asking the real questions about that time period and what was there before,” she said. 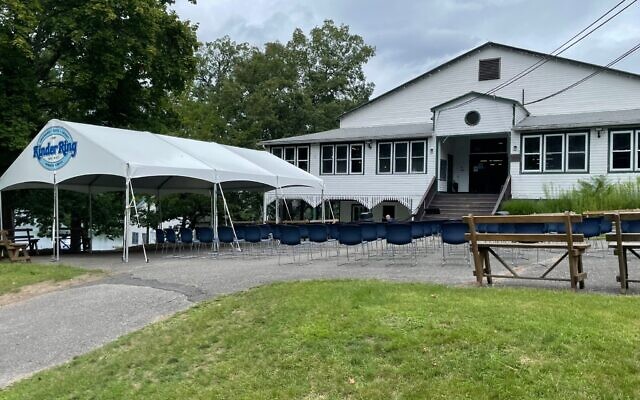 Making up for lost time

This year’s Yiddishland experience was sold out within two weeks of being announced, possibly due to the fact that last year, as a result of the pandemic, the in-person retreat was forced to move online.

All year round, The Workers Circle runs the largest Yiddish language instruction program in the world with classes held in-person, and since 2014, online as well. Since the COVID-19 pandemic, all classes have gone virtual.

“We were in a particularly good position because we had already had years of experience teaching Yiddish online,” Toback said. “In March of 2020 we moved all of our classes online and we found almost no one left us — we went from having two to three public programs online a month to over 50 programs in half a year.”

Enrollment in Yiddish classes, Toback said, surged by 30 percent in 2020, a record-breaking year for the organization. The classes currently serve some 1,000 students annually. 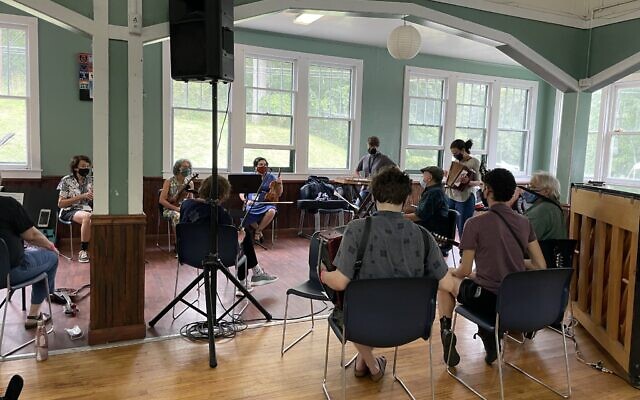 The 2020 online version of The Trip to Yiddishland saw some 2,500 people taking classes and thousands more tuning in for concerts and other performances.

Another virtual Trip to Yiddishland is scheduled for January 2022, she said.

“We’re making the best of difficult times,” said Toback. “As hard as these last two years have been and continue to be, we’ve seen the best of our traditions and activism.”

“Part of living our heritage is understanding that even in the hardest of times there are opportunities to support each other,” she said.