Global electric vehicle (EV) sales may be on the rise, with Tesla leading the charge as the dominant player in the sector, but the EV market is still quite small, accounting for just 4.6% of the global automotive sector in 2020. The slow (but steady) growth is attributed to major challenges faced by the industry — primarily the costs, logistics, and size of rechargeable batteries.

As automakers make significant progress toward rolling out more EVs in the coming decade, a move that is expected to transform the transportation sector and hopefully make a dent in a rising climate crisis, car manufacturers and battery tech startups are working to make batteries more efficient, less cumbersome, less expensive, and last longer. (The EV battery recycling sector is a growing market in itself.)

Israeli startup Addionics, founded four years ago in Tel Aviv and London, has been looking to address the issue from a different perspective — not with chemistry, but with architecture. The company has designed smart 3D Electrodes that it says can improve battery performance, capacity, charging time, safety, and lifetime.

“We are changing the architecture of the electrodes, not the chemistry,” Moshiel Biton, co-founder and CEO of Addionics, told The Times of Israel on Wednesday. In doing so, Addionics’ tech can enhance the performance of batteries no matter the type of battery chemistry. The company hopes to “integrate the solution into production lines and make it a core component of the manufacturing process,” Biton added.

By focusing on architecture and physics, Addionics is “betting on the entire race to make batteries more scalable and safer, not just on chemistry,” where competitors are currently pouring their energies, Biton said. “We are chemistry-agnostic so you can think of us as a complementary solution.”

Addionics is already working with OEMs (original equipment manufacturers) and Tier I companies on integrating its tech into existing assembly lines. This month, the company announced a new partnership with the Centre for Process Innovation (CPI), a British technology and innovation center, and the University of Warwick’s WMG, an academic department focused on knowledge transfer in engineering and tech, to cooperate on improvements in lithium-ion battery cell performance and manufacturing processes.

The collaboration is known as Project STELLAR (Smart Three-dimensional ELectrode Lithium-ion batteries with Automated Robotics) and is backed by Innovate UK, the government-funded innovation agency. It will focus on automating the fabrication of high-performance, automotive-grade batteries with Addionics’ 3D Smart Electrodes while reducing expenses, production timelines and battery cost, according to the announcement. CPI will help scale up the fabrication of the 3D Electrode designs using robotic systems, and manufacturing will be carried out by WMG.

“Strongly aligned with CPI’s vision for a cleaner environment, Addionics is developing the next generation of energy storage to support the creation of a sustainable energy system,” said Alfredo Ramos, managing director of CPI Enterprises, in a company statement. Addionics’ “revolutionary approach – focusing on physics, rather than just chemistry – promises to deliver a step-change in existing battery performance.”

“The project will leverage the latest advancements in manufacturing automation and artificial intelligence to enable a more resilient battery supply for the UK and beyond,” Biton said in the announcement.

Biton’s connection to the UK runs deep. The idea behind Addionics came to him while he was completing his PhD in material science at Imperial College London seven years ago. At the time, exploding cellphone batteries were making international headlines, and he started researching the phenomenon. He then approached his PhD supervisors, Farid Tariq and Vladimir Yufit, and asked them to join him on a journey to deliver safer, better-made batteries. 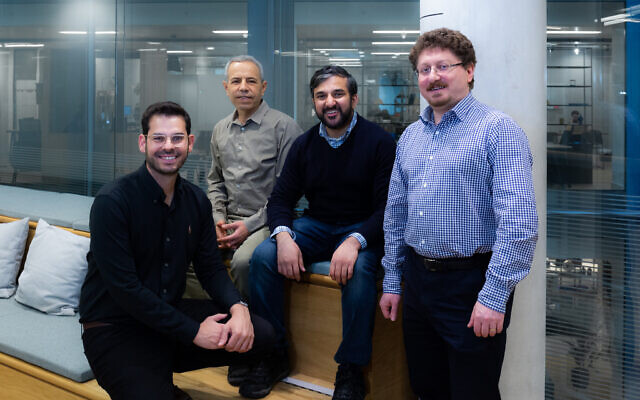 “They left their lucrative academic careers to do this with me,” Biton joked.

Tariq and Yufit remain in the UK where they lead Addionic’s local activities and serve as CSO (chief scientific officer) and CTO (chief technology officer), respectively.

Meanwhile, Biton moved back to Israel “to benefit from the local ecosystem.”

Addionics’ new partnership in the UK is one of several running projects the startup is part of, including one with Saint Gobain North America, a major materials manufacturer, to develop next-generation solid-state batteries for EVs.

These collaborations help Addionics industrialize the concept for its solution and take it forward, Biton told the Times of Israel.

But Addionics isn’t looking to become a battery factory, he emphasized. Its tech is purely a “drop-in solution” for existing and future manufacturers.

And not just automakers. Addionics’ rechargeable batteries have a host of applications including aviation and defense, consumer electronics, medical devices and renewable energy.

After all, “batteries are everywhere,” Biton noted.