N’DJAMENA, Chad — Chadian President Idriss Deby Itno, who ruled the central African nation for more than three decades, was killed Tuesday on the battlefield in a fight against rebels, the country’s top military commander announced on national television and radio.

The stunning announcement came just hours after electoral officials had declared Deby the winner of the April 11 presidential election, paving the way for him to stay in power for six more years.

The career military man who seized power in the former French colony on the back of a 1990 coup had been reelected with nearly 80 percent of the vote late Monday.

The fight occurred in the north of the Sahel country, the army said Tuesday.

The army had on Monday announced that fighting left some 300 rebels of the Front for Change and Concord in Chad (FACT) dead, while FACT claimed in a statement that Deby had been wounded — a report that official sources could not confirm.

Deby “has just breathed his last defending the sovereign nation on the battlefield” over the weekend, army spokesman General Azem Bermandoa Agouna said in a statement read out on state television.

Ministers and high-ranking military brass had said Monday that Deby was in the region on Saturday and Sunday after rebels launched an offensive from rear bases in Libya on the day of the election, April 11.

The result was never in serious doubt, with a divided opposition, boycott calls, and a campaign in which demonstrations were banned or dispersed. 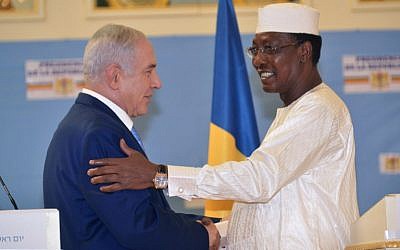 Prime Minister Benjamin Netanyahu and Déby announced the reestablishment of diplomatic relations between Chad and Israel in January 2019, after Chad severed ties with Israel in 1972 due to pressure from Libyan strongman Muammar Gaddafi.

Appearing alongside Déby at the N’Djamena presidential palace, Netanyahu called the move “a breakthrough into the heart of the Muslim world.”