Prime Minister Benjamin Netanyahu on Monday lashed out at state prosecutors after the first day of testimony in his corruption trial, accusing them of “hypocrisy” and of leading a “witch hunt” against him.

Netanyahu appeared for the opening statements at the Jerusalem District Court, but was granted permission to leave before the first witness testified. The premier is on trial for fraud and breach of trust in three cases, and also faces a bribery charge in one of them. He denies wrongdoing and regularly claims without evidence that the charges were fabricated in order to remove him from power.

In a televised speech at his official residence, Netanyahu specifically took aim at lead prosecutor Liat Ben-Ari’s charge, in her opening arguments, that the prime minister had abused his powers.

“What hypocrisy. The entire conduct against me is heavy-handed, improper use of the powers of… the prosecution,” Netanyahu said.

“The prosecution opened the investigations against the prime minister illegally,” he added.

The prime minister was referring to Attorney General Avichai Mandelblit’s apparent failure to approve the probe in writing. During a February hearing, the court chided Mandelblit for the oversight, but dismissed a demand by Netanyahu’s lawyers to throw out the criminal indictments against the prime minister.

“It’s a witch hunt. They didn’t investigate a crime, they didn’t look for a crime; they hunted for a man, they hunted me,” Netanyahu continued.

He claimed investigators ignored testimony that did not match their thesis, leaked material and extorted witnesses.

“This is how they try to overthrow a powerful prime minister from the right. This is what an attempted coup looks like,” the prime minister said. “What is happening is an effort to trample democracy, over and over again. They are attempting to annul the will of the electorate.”

The prime minister’s remarks came as party leaders met with President Reuven Rivlin to recommend who should form a government after the March 23 elections. The national vote, the fourth in two years, did not produce a clear winner.

Blue and White leader Benny Gantz said Netanyahu’s speech showed he was not fit to continue as prime minister.

“He is the one who is trying to carry out a government coup. His attack against the State Attorney’s Office was intended for one purpose — to delegitimize the outcome of the trial and attempt to gain unlimited power. I call on all factions to unite and find a way to replace him,” Gantz tweeted. 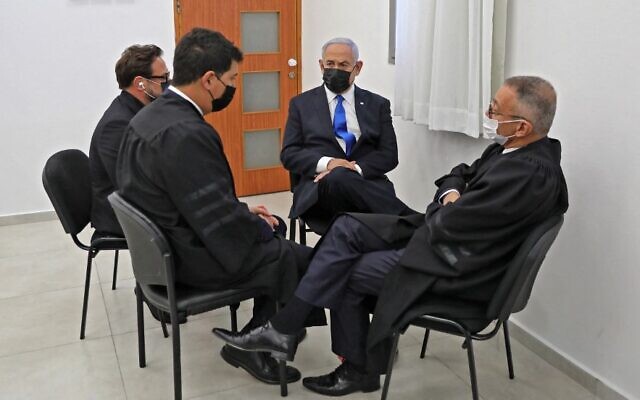 Prime Minister Benjamin Netanyahu sits with his lawyers at a hearing in his corruption trial at Jerusalem District Court, April 5, 2021. (POOL / AFP)

During Monday’s hearing, the judges heard testimony from Ilan Yeshua, the former CEO of the Walla news site, who recounted in detail how he was instructed by his bosses and people close to Netanyahu to skew the site toward positive coverage of the premier and criticism of his rivals — and said those instructions were part of a quid pro quo deal between Netanyahu and the site’s owners.

The allegation goes to the heart of the most serious of the three cases against Netanyahu, Case 4000, in which he also is charged with bribery. Prosecutors allege the favorable coverage was part of a quid pro quo between Netanyahu and then-Walla-owner Shaul Elovitch, and was offered in exchange for regulatory favors for the Bezeq telecommunications company, which Elovitch also owned.

Beyond the Walla case, Netanyahu faces charges of fraud and breach of trust in Case 1000 and in Case 2000.