But CEO Alan Jope gave no indication that Unilever would force Ben & Jerry’s to roll back its controversial decision.

The Ben & Jerry’s announcement is one of the strongest rebukes by a well-known company against Israel’s settlements, which are widely seen by the international community as illegal. The Israeli government has condemned the decision, accusing the company of joining a global Palestinian-led boycott movement against Israel. Jerusalem has urged 35 American states with anti-boycott laws to punish Unilever.

In a conference call with investors, Jope said that Ben & Jerry’s, which has a long history of social activism, made the decision on its own.

He noted that under its purchase agreement with Ben & Jerry’s in 2000, the company maintained broad independence over its social justice policies and that Unilever respected that arrangement.

“Obviously it’s a complex and sensitive matter that elicits very strong feelings,” he said. “If there is one message I want to underscore in this call, it’s that Unilever remains fully committed to our business in Israel.”

That includes a new 35 million euro ($41 million) razor factory and corporate offices and facilities that employ some 2,000 people, he said.

He said “it is not our intent” to regularly delve into such sensitive matters.

“It’s been a longstanding issue for Ben & Jerry’s,” he said. “We were aware of this decision by the brand and its independent board, but it’s certainly not our intention that every quarter will have one quite as fiery as this one.”

After Ben & Jerry’s International made its announcement Monday, Prime Minister Naftali Bennett spoke personally with Jope to complain about the development, stressing to the Unilever CEO that Ben and Jerry’s was taking a “clearly anti-Israeli step.”

On Thursday Bennett told a visiting group of ambassadors that boycotting Israel was a terrible business move, insinuating that Ben & Jerry’s was siding with the Hamas terror by banning sales in Israeli settlements.

“Whoever considers turning a boycott of Israel into a marketing or branding issue will discover that it is the worst business decision he has ever made,” he said.

“Consumers, certainly in Israel but also in the US and other countries, don’t think that taking Hamas’s side is cool,” he said. “We will use all measures at our disposal, including legislative.” 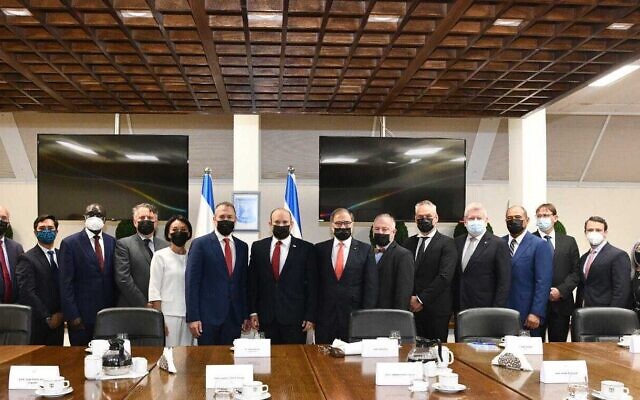 Prime Minister Naftali Bennett meets with a visiting delegation of ambassadors to the UN and US. (Haim Zach/GPO)

Ben & Jerry’s said on Monday that selling ice cream in the “Occupied Palestinian Territory,” apparently referring to West Bank settlements and East Jerusalem, was “inconsistent with our values.” It was unclear whether it planned to keep selling its products in Israel.

It said the decision would take effect at the end of 2022, when its contract with the current Israeli manufacturer and distributor expires. The future of Ben & Jerry’s products across Israel beginning in 2023 remains in question. Ben & Jerry’s Israeli manufacturer opposes the decision and has vowed to continue to sell throughout all of Israel for the remainder of its contract.

The move by the international company sparked outrage from government ministers, with Interior Minister Ayelet Shaked saying Wednesday that Israel is working to initiate a grassroots boycott of Ben & Jerry’s in the US by Jewish, evangelical and pro-Israel groups.

In addition, Israel ambassador to the US and the UN Gilad Erdan earlier this week sent letters to the governors of 35 US states urging them to apply local laws against boycotting Israel.

Unilever became a wholly British company at the end of last year after it completed the merger of its Dutch and British corporate entities.