The Channel 12 report, which came as Israel reeled after 45 people were crushed to death in a stampede during a religious festival in northern Israel, said Gantz had relayed this message to the premier following the tragedy, believed to be the worst peacetime disaster in the country’s history.

Gantz stressed to Netanyahu that he is committed to the “change bloc” of parties seeking to replace the prime minister, the network said, without citing a source.

Netanyahu, Israel’s longest-serving prime minister, is fighting for his political and legal survival after the March 23 elections, as he struggles to form a government and is on trial for corruption charges, which he denies. His official mandate to assemble a coalition expires on Tuesday night, though he can request a 14-day extension from President Reuven Rivlin.

Last month’s elections, the fourth since April 2019, ended in gridlock, with Netanyahu’s right-wing religious bloc again coming short of a ruling majority. After the previous elections in March 2020, Netanyahu agreed to a power-sharing deal with Gantz in which two agreed to swap off as prime minister, but it dissolved in December after the prime minister refused to pass a two-year state budget, the only way elections could be called without the Blue and White leader becoming premier.

On Thursday, a report said Gantz has engaged in negotiations with Netanyahu to form a government, going against his pledge not to again form a coalition with the Likud leader. Blue and White categorically rejected the story.

In its main news broadcast Friday evening, Channel 12 further reported that Netanyahu was only expected to ask Rivlin for an extension before his mandate expires Tuesday night if he is close to forming a government and can prove to the president a majority is in reach.

Barring an unexpected breakthrough by then, however, Netanyahu has no clear way of putting together a ruling coalition.

Rivlin, who as Israel’s president is tasked with mandating a lawmaker to form a government, can either give Netanyahu an extension, hand the mandate to another lawmaker or kick it to the Knesset for a 21-day period, after which fifth elections will automatically will be called if no one forms a government.

If Rivlin does task another Knesset member with forming a government, it is widely expected to be either Yesh Atid leader Yair Lapid and Yamina chief Natfali Bennett, who have been holding talks on forming a unity government without Netanyahu. Bennett has also been holding separate talks with Netanyahu.

The various efforts to form a government have dominated headlines in recent weeks, though they were overshadowed by the disaster during Lag B’Omer celebrations at Mount Meron.

It was unclear what — if any — impact the tragedy would have on the Israeli political system. 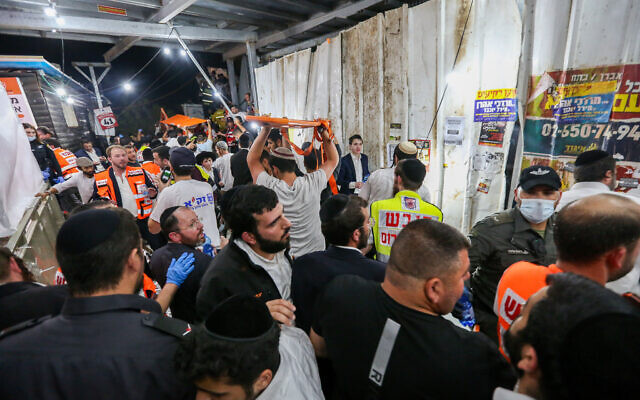 Key pillars of Netanyahu’s bloc are the ultra-Orthodox Shas and United Torah Judaism parties, whose support he needs if he wants to keep faint hopes alive of staying in power.

During a visit Friday to Mount Meron, Netanyahu was jeered by dozens of religious protesters. If such sentiments spread, it could further hurt Netanyahu’s prospects.

The stampede also threatened to deepen a broad public backlash against the ultra-Orthodox.

Gideon Rahat, a political scientist at the Hebrew University and fellow at the Israel Democracy Institute, said the coming days would see a battle over “framing” of the event. Netanyahu will call for national healing and unity, while his opponents will say he is unfit to remain in office and it’s time for change.

“There is a battle on the framing, who is to blame, not to blame,” he said. “Already we see the signs of it,” Rahat said.