“I say this sharply and clearly: We will not allow harm to Israel’s sovereignty and security. Whoever tries to harm us will pay a painful price,” Bennett said after two projectiles were launched from Lebanon toward northern Israel earlier that morning.

“Lebanon is on the verge of collapse, like any country in which Iran bases itself,” the premier said, referring to the severe economic, political and social chaos Lebanon is facing.

“Its citizens were taken hostage by[Ayatollah Ali] Khamenei and [Hassan] Nasrallah for the sake of Iranian interests,” he said, naming the supreme leader of Iran and the secretary-general of the Hezbollah terror group.

“This is unfortunate, but we will not accept a spillover of the situation in Lebanon into Israel,” Bennett said.

The prime minister made his comments during a ceremony marking the Galilee town of Ma’alot-Tarshiha’s connection to Israel’s fiberoptic network.

Supporters of Lebanon’s Hezbollah lift its flags (C) alongside those of Iran (L) and Palestine, during an anti-Israel protest in the southern Khiam area by the border with Israel, facing the northern Israeli town of Metula, on May 14, 2021. (Photo by Mahmoud ZAYYAT / AFP)

Early Tuesday morning, two rockets were fired at northern Israel from Lebanon, setting off warning sirens in the Western Galilee region, the Israel Defense Forces said. The army fired artillery shells at the source of the launches in response.

One of the rockets was intercepted by Israel’s Iron Dome missile defense system, while the second projectile fell in an open area near the coast, the IDF said. There were no reports of injuries or damage, and the army said it had no special instructions for residents of the region.

Defense Minister Benny Gantz said earlier Tuesday that Lebanon was responsible for the overnight rocket attack because the country “allows terrorists to operate within its territory.” 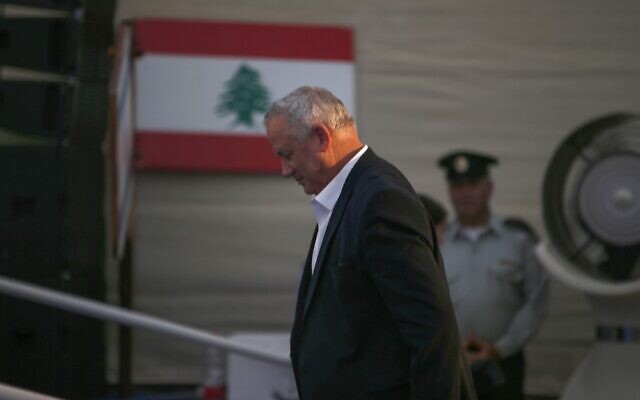 Defense Minister Benny Gantz takes part in a ceremony in the northern town of Metula on July 4, 2021, to inaugurate a monument commemorating fallen members of the South Lebanon Army. (Jalaa Marey/AFP)

“Israel will act against any threat to its sovereignty and its citizens, and will respond in accordance to its interests — at the relevant time and place,” Gantz said, adding that Israel “will not allow the social, political and economic crisis in Lebanon to turn into a security threat to Israel.”

Gantz also called upon the international community to act to restore stability to Lebanon, amid what the World Bank says is one of the world’s worst financial crises since the 1850s.

The early morning attack came some four hours after Syrian state media said Israeli aircraft launched a number of missiles at targets near the Syrian city of Aleppo. 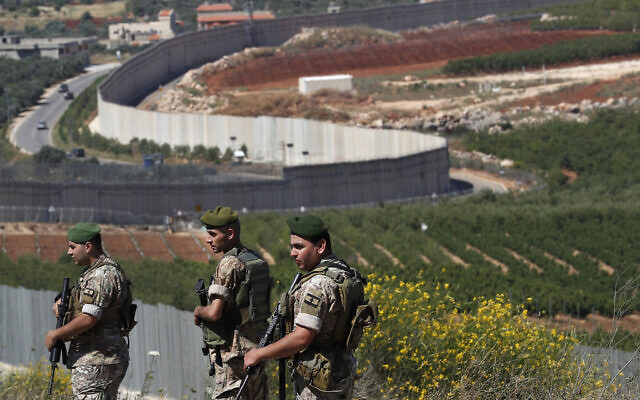 In this May 15, 2021 file photo, Lebanese army soldiers deploy at the Lebanese side of the Lebanese-Israeli border in the southern village of Kfar Kila, Lebanon. (AP Photo/Hussein Malla, File)

The Israeli military believes the rockets at northern Israel were fired by a Palestinian group in southern Lebanon, not by the country’s powerful Hezbollah terror group. However, Hezbollah maintains tight control over southern Lebanon, making it unlikely that such an attack would be conducted from this area without at least its tacit approval.

In response, the Israeli army said it had fired artillery shells at the source of the rocket fire, in Lebanon’s Wadi Hamoul region. This was also the area from which rockets were fired at Israel by Palestinian terrorists in May.

The Lebanese Army announced Tuesday it had located three Grad rocket launchers, one of which was armed, in the town of Qlaileh, south of Tyre.

There are several Palestinian terror groups operating in southern Lebanon, along with Hezbollah, which is backed by Tehran and closely allied with Syria’s Assad regime.

Israel has frequently hit Hezbollah targets and fighters in Syria in an effort to keep the terrorist militia from opening a second front against Israel there.

Times of Israel staff and agencies contributed to this report