Prime Minister Naftali Bennett warned opposition parties not to cross the “red line” of harming Israel’s national security ahead of a Monday night Knesset plenum vote on the Palestinian family reunification law, for which the government will likely need to enlist the assistance of non-coalition parties.

“There are some things you don’t play with. The nation needs control over who comes in,” Bennett said in a statement to the press at the opening of a faction meeting of his Yamina party. “National security is a red line.”

The law was initially passed after some 130,000 Palestinians entered Israel via family reunification between 1993 and 2003, including during the Second Intifada onslaught of Palestinian terrorism. The stated prime concern at the time was that some Palestinians gaining Israeli status would engage in terrorism, but there was also a demographic goal: The security establishment’s assessment is that some 200,000 Palestinians would gain Israeli citizenship or residency each decade were it not for this legislation, Channel 12 reported.

The deadline for reextending the legislation is midnight on Tuesday.

While previous right-wing governments have had no problem extending the law year after year, the new coalition’s inclusion of left-leaning parties that object to the legislation’s impact on civil liberties has placed its renewal in jeopardy.

Palestinians and Arab Israelis protest against the 2003 Citizenship and Entry Law into Israel outside the Knesset on Tuesday, June 29, 2021. (Yonatan Sindel/Flash90)

The left-wing Meretz and the Islamist Ra’am coalition parties have declared that they will not back the law, and as a result, it failed to pass a key Monday vote in the Knesset Arrangements Committee that would have allowed it to be transferred to the Foreign Affairs and Defense Committee. If that vote had passed, the latter panel would have been tasked with reextending the law instead of the Knesset plenum, which the coalition thought would have made its passage more likely.

Right-wing opposition parties led by Likud and Religious Zionism have pledged to vote against the law in an effort to embarrass the new government, saying that if it doesn’t have the votes to pass legislation it claims is critical for Israel’s security, it has no legitimacy to continue functioning.

The coalition-leading Yamina party, in turn, is planning to call what it hopes is the opposition’s bluff, arguing that if the legislation is so critical to Israel’s national security, Likud and Religious Zionism should be able to put politics aside in order to ensure that it passes.

“Allowing in thousands of Palestinians and harming national security for another quarter of a political point is simply not the right thing to do,” Bennett said Monday. “We are seeing childish games [by the opposition]… while what’s needed is national responsibility.”

Yamina No. 2, Interior Minister Ayelet Shaked, noted that the bill currently didn’t have a majority necessary among Knesset members, but that she hoped it would have one by the end of the day via negotiations she’s been holding with the Meretz and Ra’am parties.

“The state must have control over who enters it and who becomes a citizen,” she said. 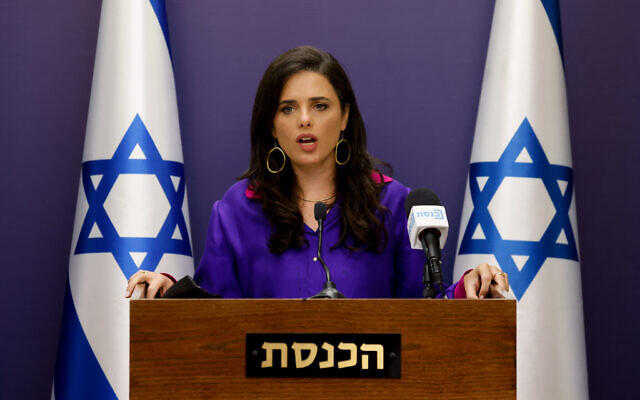 “Most terror attacks carried out by Arab Israelis were ones that came from family reunifications or their descendants,” Shaked claimed, without providing evidence.

“Until now, there has never been a nationalist opposition party that opposed this law,” she charged.

While the leaders of the right-wing Yamina presented the law as a matter of national security, Foreign Minister Yair Lapid had a different take.

“There is no need to hide from the essence of the reunification law. It is one of the tools designed to ensure a Jewish majority in the State of Israel,” he said Monday at a faction meeting of his centrist Yesh Atid party.

“If the opposition votes against the law, it will prove that it is more concerned with being against the government than being for the country,” he added, while acknowledging that the law creates tension between Israel’s Jewish and democratic characters.

Lapid said that it wouldn’t be “a huge disaster even if it doesn’t pass… Governments do not rise and fall on the issue.” 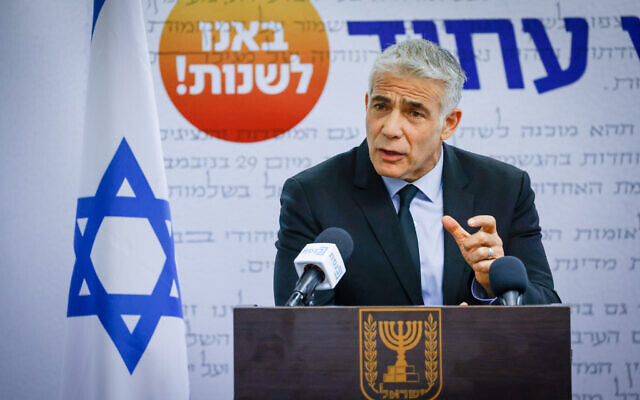 Head of the Yesh Atid party Yair Lapid speaks during a faction meeting at the Knesset on July 5, 2021.(Olivier Fitoussi/Flash900

The foreign minister said he understands the opposition of the Meretz and Ra’am parties to the law, over “more than a few cases in which the law needlessly caused humanitarian harm… people who fell in love and got married and built families who were hurt without doing anything wrong.”

He said the government “will form a mechanism to try and cut such cases down to a minimum, and form a team that will review how to prevent such harm in the future.”

Opposition chairman Benjamin Netanyahu said his bloc was prepared to back the extension of the reunification law for two months if the coalition agrees to pass a more stringent Basic Law on the matter that would permanently bar granting citizenship to Palestinians who marry Israelis without requiring an annual extension.

“Bennett and Lapid are unable to preserve the Jewish character of the State of Israel,” Netanyahu said at a Likud faction meeting.

Far-right leader Bezalel Smotrich maintained at a faction meeting of his Religious Zionism party that the opposition would not provide a lifeboat for the new government. He said that if the law failed to pass, the Interior Ministry will simply be required to adjudicate citizenship and residency requests from Palestinians on an individual basis, hinting that he didn’t believe failure to extend the legislation would present a national security threat.