NAIROBI, Kenya — An airstrike hit a busy market in Ethiopia’s northern Tigray village of Togoga on Tuesday, according to health workers who said soldiers blocked medical teams from traveling to the scene. Dozens of people were killed, they and a former resident said, citing witnesses.

Two doctors and a nurse in Tigray’s regional capital, Mekele, told The Associated Press they were unable to confirm how many people were killed, but one doctor said health workers at the scene reported “more than 80 civilian deaths.” The health workers spoke on condition of anonymity for fear of retaliation.

The alleged airstrike comes amid some of the fiercest fighting in the Tigray region since the conflict began in November as Ethiopian forces supported by those from neighboring Eritrea pursue Tigray’s former leaders. A military spokesman and the spokeswoman for Ethiopia’s prime minister did not immediately respond to a request for comment.

Wounded patients being treated at Mekele’s Ayder hospital told health workers that a plane dropped a bomb on Togoga’s marketplace. The six patients included a 2-year-old child with “abdominal trauma” and a 6-year-old, the nurse said. An ambulance carrying a wounded baby to Mekele, almost 60 kilometers (37 miles) away by road, was blocked for two hours and the baby died on the way, the nurse added.

Hailu Kebede, foreign affairs head for the Salsay Woyane Tigray opposition party and who comes from Togoga, told the AP that one fleeing witness to the attack had counted more than 30 bodies and other witnesses were reporting more than 50 people killed. Many more were said to be wounded in the remote village that’s linked to Mekele in part by challenging stretches of dirt roads.

“It was horrific,” said a staffer with an international aid group who told the AP he had spoken with a colleague and others at the scene. “We don’t know if the jets were coming from Ethiopia or Eritrea. They are still looking for bodies by hand. More than 50 people were killed, maybe more.”

Displaced Tigrayans queue to receive food donated by local residents at a reception center for the internally displaced in Mekele, in the Tigray region of northern Ethiopia Sunday, May 9, 2021 (AP Photo/Ben Curtis)

On Tuesday afternoon, a convoy of ambulances attempting to reach Togoga, about 25 kilometers (15 miles) west of Mekele, was turned back by soldiers near Tukul, the health workers said. Several more ambulances were turned back later in the day and on Wednesday morning, but one group of medical workers reached the site on Tuesday evening via a different route.

Those medical workers were treating 40 wounded people but told colleagues in Mekele that the number of wounded is likely higher as some people fled after the attack. Five of the wounded patients were said to need emergency operations but the health workers were unable to evacuate them.

“We have been asking, but until now we didn’t get permission to go, so we don’t know how many people are dead,” said one of the doctors in Mekele.

Another doctor said the Red Cross ambulance he was traveling in on Tuesday while trying to reach the scene was shot at twice by Ethiopian soldiers, who held his team for 45 minutes before ordering them back to Mekele.

“We are not allowed to go,” he said. “They told us whoever goes, they are helping the troops of the TPLF.”

The TPLF refers to the Tigray People’s Liberation Front, which governed Tigray until it was ousted by a federal government offensive in November. The subsequent fighting has killed thousands and forced more than 2 million people from their homes. 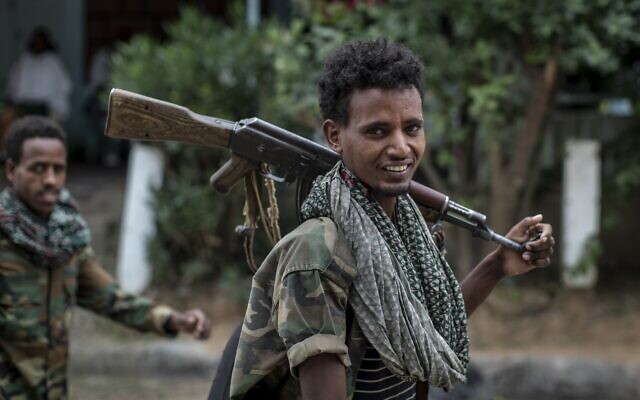 Fighters loyal to the Tigray People’s Liberation Front (TPLF) walk along a street in the town of Hawzen, then controlled by the group, in the Tigray region of northern Ethiopia Friday, May 7, 2021. (AP Photo/Ben Curtis)

While the United Nations has said all sides have been accused of abuses, Ethiopian and Eritrean soldiers have been repeatedly accused by witnesses of looting and destroying health centers across the Tigray region and denying civilians access to care.

This month, humanitarian agencies warned that 350,00 people in Tigray are facing famine. Aid workers have said they have been repeatedly denied access to several parts of the region by soldiers.

The government of Prime Minister Abiy Ahmed says it has nearly defeated the rebels. But forces loyal to the TPLF recently announced an offensive in parts of Tigray and have claimed a string of victories.

A resident in Adigrat, about 100 kilometers (62 miles) north of Mekele, said a group of Tigrayan fighters briefly entered the town on Tuesday, although he said it had since been retaken by Ethiopian and Eritrean forces. He said federal police had since been seen beating people in the center of the town. 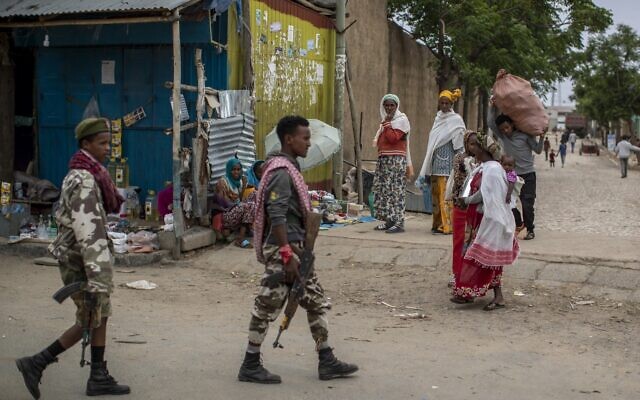 Fighters loyal to the Tigray People’s Liberation Front (TPLF) walk past women selling foodstuffs on the street in the town of Hawzen, then-controlled by the group, in the Tigray region of northern Ethiopia Friday, May 7, 2021 (AP Photo/Ben Curtis)

“Everybody is staying at home, there is no movement in the town,” he said.

Renewed fighting was also reported in Edaga Hamus and Wukro, two towns that sit on the main road to Mekele.

The reports came as Ethiopia held federal and regional elections on Monday. The vote was peaceful in most parts of the country, although there was no voting in Tigray.

The vote was delayed last year due to the COVID-19 pandemic, heightening tensions between the federal government and the TPLF, which went ahead with its own regional election in September.