The American Jewish Committee on Monday denounced plans by the southwestern US state of Arizona to jumpstart its long-frozen execution program by using “Zyklon B,” the chemical used by the Nazis at the Auschwitz-Birkenau, Majdanek, and other death camps.

“Arizona’s decision to employ Zyklon B gas as a means of execution defies belief,” the AJC said in a statement.

“While there can be no doubt about its effectiveness – the Nazis used it to kill millions of innocent Jews – it is that very effectiveness as an instrument of genocide that makes it utterly inappropriate for use by a civilized state in a proceeding sanctioned by the state and its judiciary.”

Last week, the UK’s Guardian news site,  reported on Arizona’s plans to refurbish its gas chamber and produce the gas, based on documents obtained through public records requests.

The state prison in Florence, Arizona that houses the state’s gas chamber, on July 23, 2014. (AP Photo)

They showed that Arizona authorities spent some $2,000 purchasing a solid brick of potassium cyanide in December, along with sodium hydroxide pellets and sulfuric acid, which are intended to be used to generate the deadly gas.

“So long as the death penalty is legally acceptable, one must be prepared to accept some level of cruelty in the process. But there is something profoundly wrong when a state is so anxious to execute people, who in any event can be incapacitated by incarcerating them forever, that it is prepared to resort to a method of execution that inevitably, inextricably, and forever is linked to the worst outrages of human history,” the AJC said.

“Whether or not one supports the death penalty as a general matter, there is general agreement in American society that a gas devised as a pesticide, and used to eliminate Jews, has no place in the administration of criminal justice.”

The documents revealed that Arizona had “refurbished” the state’s gas chamber, built in 1949 and mothballed in 1999 after the botched execution of an inmate, Walter LaGrand. 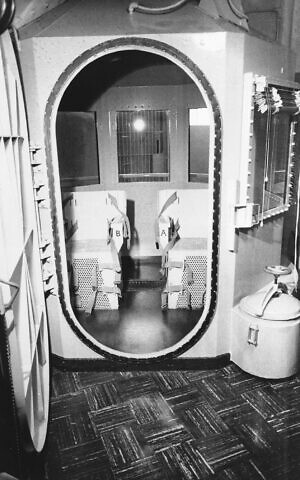 Illustrative: This is the interior of the gas chamber at San Quentin prison in California, pictured January 14, 1972. (AP Photo)

LaGrand died an “agonizing choking and gagging” death, which lasted 18 minutes from the moment the gas entered the chamber until he died, “shrouded in poisonous gas,” according to an eyewitness account published in the Tucson Citizen.

The Guardian said authorities had now used “primitive” means to test the chamber at the state prison in Florence, including using a lit candle to check if the air seals were intact. They also conducted a test with water running through the system and a smoke grenade was thrown inside.

The state has been looking for ways to restart its executions, which were put on hold after another botched execution in 2014.

Recent years have seen US states struggling to carry out executions by lethal injection with pharmaceutical companies refusing to sell them the drugs needed to sedate inmates, relax their muscles, and stop their hearts.

Some other states have reintroduced execution by firing squad and the electric chair.

Arizona announced in 2019 that it would resume executions, but did not specify how. It currently has 115 inmates on death row.

The Nazis used Zyklon B to kill millions in death camp gas chambers, which were set up to look like showers for arriving inmates. 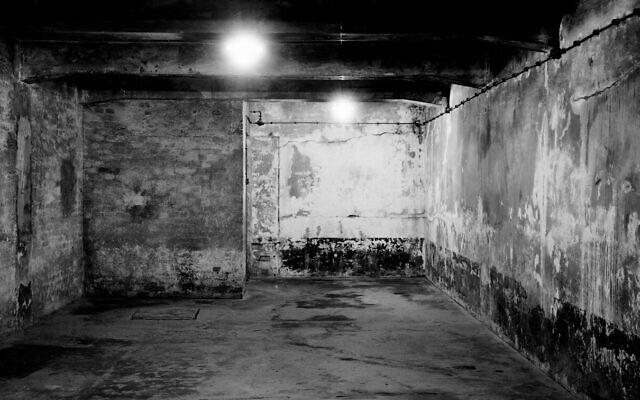 A view inside gas chamber one at the former Nazi death camp of Auschwitz I in Oswiecim, Poland, December 8, 2019. (Markus Schreiber/AP)

One million European Jews were murdered at Auschwitz-Birkenau, which was set up by Nazi Germany in occupied Poland in 1940-1945. More than 100,000 others, including non-Jewish Poles, Roma, Soviet prisoners of war and anti-Nazi resistance fighters, also died there, according to the Auschwitz Museum.

“You have to wonder what Arizona was thinking in believing that in 2021 it is acceptable to execute people in a gas chamber with cyanide gas,” Robert Dunham, executive director of the Death Penalty Information Center, told the Guardian. “Did they have anybody study the history of the Holocaust?”