JUNEAU, Alaska (AP) — Al Gross commands a fishing boat as a narrator describes him prospecting for gold and killing a grizzly bear in self-defense in an ad meant to underscore a central theme of Gross’s US Senate campaign as an independent: that he knows Alaska.

“Out here,” he says as the boat rocks on the water, “if you can’t think for yourself, you won’t survive.”

Gross, a doctor running with Democratic support, is challenging Republican US Sen. Dan Sullivan in a state that has long been a GOP stronghold, outraising Sullivan and putting Republicans on the defensive. Across the country, Republicans are nervous about Senate seats like Sullivan’s they once thought safe as Democrats hoping to retake the chamber try to tap into the party’s enthusiasm for ousting US President Donald Trump.

Sullivan has sought to paint Gross, who said he would caucus with Democrats, as a liberal and someone who would empower an “anti-Alaska agenda.” Sullivan said that includes limiting access to federal lands for development, cutting military spending and eliminating the potential for oil and gas drilling in the Arctic National Wildlife Refuge — an issue state political leaders have long supported but one that has become a flashpoint in the national climate change debate between Republicans and Democrats.

In this May 7, 2020, file photo, Sen. Dan Sullivan testifies during a hearing on Capitol Hill in Washington (Al Drago/Pool via AP, File)

“I know these senators,” Sullivan said.

Oil has been Alaska’s economic lifeblood for decades. Production today is a fraction of what it once was. Gross, like Sullivan, supports drilling in the refuge. Gross said he supports renewable energy as a way to diversify Alaska’s economy but not the so-called Green New Deal.

“If you think I have any intention of turning Alaska into a park, you’re wrong,” Gross said while wearing a camouflage jacket during a debate held via videoconference.

In the last 40 years, Alaska has elected one Democrat to the Senate, Mark Begich, who served a term before narrowly losing to Sullivan in 2014, a battleground year in which Republicans regained the Senate. That year, Alaskans also elected an independent governor, who changed his party affiliation from Republican in joining forces with Democrats.

A Democratic presidential candidate last won the state in 1964. Trump won Alaska in 2016 with 51% of the vote; Democrat Hillary Clinton won 36%.

Sullivan, who withdrew his support of Trump in 2016 after a 2005 video of Trump making lewd comments emerged, said Trump is his choice this go-round, and Trump has endorsed him. Gross has called Sullivan a Trump “yes man.”

Through September, Gross had raised $13.9 million, compared to $9.4 million for Sullivan this cycle. 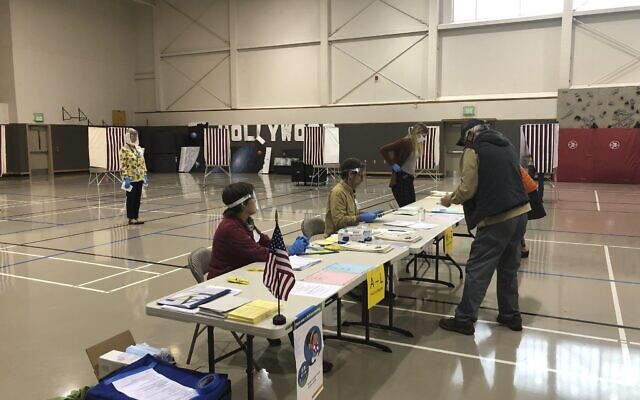 A voter checks in at a high school polling location for the state’s primary election on Aug. 18, 2020, in Juneau, Alaska (AP Photo/Becky Bohrer)

John-Henry Heckendorn, who worked as a political consultant in Alaska before joining Airbnb, said Gross’s resume and ability to put his own money into the race helped generate momentum and draw outside attention in mounting a “realistic challenge.” Gross has contributed about $730,000.

Heckendorn also likened Sullivan to a quarterback a team trusts to execute and not make mistakes. Alaska still leans conservative, said Heckendorn, who remains a partner at a political communications firm he said provided some video production help for groups backing Gross.

An orthopedic surgeon, Gross in 2017 wrote in support of a single-payer health care system, saying he believed “economic pressure will be the ultimate straw that brings Alaska and the rest of the US to adopt single payer.”

He recently said articles he wrote on the issue were meant to draw attention to Alaska’s high health-care costs and he “never intended for people to think that that was the policy I would want to put forward as a United States senator.” He said he supports a public option for individuals and small businesses on the health insurance exchange. 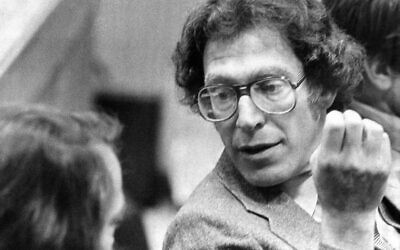 Gross grew up in Alaska; his father, the late Avrum Gross, was a state attorney general. Some of Gross’s ads and videos have emphasized the Alaska lifestyle — skiing, flinging mud on ATVs — or referenced the bear killed “in self-defense after it snuck up on him.”

Gross’s partner on a 1995 duck-hunting trip, in an incident report to state wildlife officials, said he heard a “blood-curdling scream” from Gross, followed by “bear,” and that the two shot the animal as it advanced on Gross. The officer who handled the case wrote each man shot twice and the bear was hit three times.

Fisherman Doug Rhodes, who lives in the small southeast Alaska city of Craig, said the bear ad smacked of “reality TV crap.” But he said he’s voting for Gross, seeing Gross, who has a fishing background, as better understanding the issues of coastal communities. Rhodes said in 2014 he voted for Sullivan because he wasn’t happy with Begich.

If elected, Gross “has to prove himself, too,” said Rhodes, who considers himself an independent.

Sullivan, who worked in the administration of President George W. Bush, is a Marine Corps reservist and former state attorney general and natural resources commissioner. His wife, Julie Fate Sullivan, is from a prominent Alaska Native family. 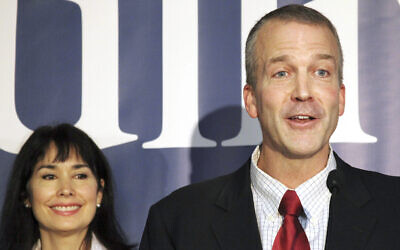 In this Oct. 15, 2013, file photo, Dan Sullivan, right, smiles while announcing a US Senate bid in Anchorage, Alaska. On the left is his wife, Julie Fate Sullivan (AP Photo/Mark Thiessen, File)

Sullivan has cited investments in the military and law enforcement in rural areas and access to federal lands for resource development as areas where he said the Trump administration has been a partner with the state. He said having Democrats in control could set back what he says have been gains for Alaska.

Jacqueline Tupou, who manages commercial real estate and was a Republican elector in the 2016 presidential race, said Sullivan has been an advocate for Alaska. Tupou said she considers herself moderate on most issues.

“I really think that it’s important that we’re voting for candidates that we’re comfortable with and that we think are going to do what’s right,” she said.