Standing alongside President Reuven Rivlin, French President Emmanuel Macron on Thursday urged Iran to stop aggravating the already grave crisis over its nuclear program by multiplying violations of the 2015 deal with world powers.

“Iran must stop worsening the nuclear situation that is already serious by accumulating violations of the Vienna accord,” Macron said during a joint press conference at the Elysee Palace with Rivlin, currently on a European tour to discuss the Iranian threat.

“Iran must make the expected gestures and behave in a responsible manner,” Macron said.

Rivlin’s three-day trip to Germany, France, and Austria comes as the UN’s nuclear watchdog is working to save the 2015 agreement. Germany and France are both signatories to the so-called Joint Comprehensive Plan of Action, which gave Iran relief from sanctions in return for curbs on its nuclear program.

After its withdrawal from the pact in 2018, the US reapplied strict sanctions on Iran, which responded by stepping away from its own commitments to the deal, in particular by ramping up uranium enrichment, a key process in producing a nuclear weapon.

The new administration of US President Joe Biden has said it is prepared to reenter the nuclear deal and start lifting sanctions against Iran if it returns to full compliance. But Tehran rejected that precondition, pressing on with increasing nuclear work in retaliation for the sanctions.

“France is fully mobilized for a relaunch of a credible process to find a solution to this crisis,” Macron said Thursday. “This means returning to a control and supervision of the Iranian nuclear program while also integrating a control of Iran’s ballistic activity in the region.”

Rivlin, who is traveling with IDF Chief of Staff Lt.-Gen. Aviv Kohavi, has underscored the threat from Iran’s nuclear program in his meetings with Austrian and German leaders earlier in the week. 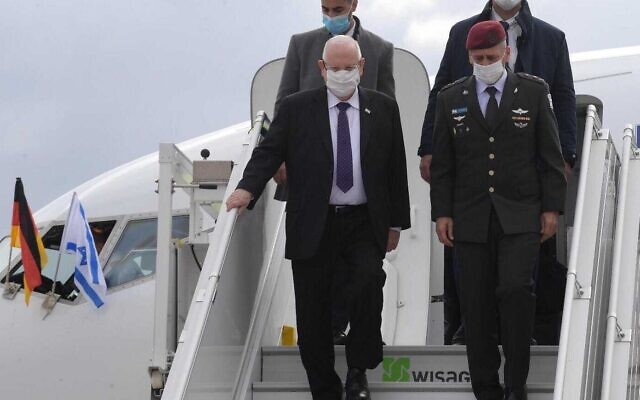 Meeting with Macron after Rivlin, Kohavi told the French president that Lebanon has been taken “captive” by the Iranian-backed Hezbollah terror group.

“Hezbollah today has hundreds of thousands of missiles and rockets located that are in the heart of civilian populations and are deliberately aimed at harming Israeli citizens. The IDF will do everything to prevent this,” Kohavi said to Macron, according to an Israel Defense Forces statement.

The IDF chief warned that Israel has thousands of targets picked out in Lebanon.

He also said that Lebanon is responsible for what happens within its borders and will bear “full responsibility” for any Hezbollah attack on Israel.