As Israel experiences a surge in coronavirus cases, health officials are working to speed up the delivery of its next shipment of Pfizer-BioNtech vaccines, Army Radio reported Wednesday.

The next shipment of vaccines is due to arrive in a few months, according to the report.

Health Ministry director-general Chezy Levy and other officials have been in contact with Pfizer in the hope of bringing forward the delivery date.

The current stock of vaccines in the country is valid for use only until the end of July and since the second of the necessary two injections is given three weeks after the first, those who want to be fully vaccinated will need to do so in the next two weeks, the station reported.

Israel has recently begun offering vaccines to 12- to 15-year-olds, who previously were not included in the national vaccination plan, and in the past few days health officials have increasingly advised that parents have their children inoculated.

People shop, some wearing face masks at the Mahane Yehuda market in Jerusalem, May 26, 2021. (Olivier Fitoussi/Flash90)

Last Friday, the Palestinian Authority agreed to but then later rejected a deal for Israel to deliver some 1 million doses of the Pfizer-BioNTech vaccine, saying that the first 100,000 delivered were too close to expiring.

Under the terms of the deal, Israel was handing over its soon-to-expire vaccines in exchange for the PA’s shipment of fresh Pfizer vaccines, which are scheduled to arrive later in 2021.

The PA on Sunday said it would seek to renegotiate the agreement.

Levy said earlier this week that the vaccines offered to the Palestinians were the same ones being given to Israeli children. 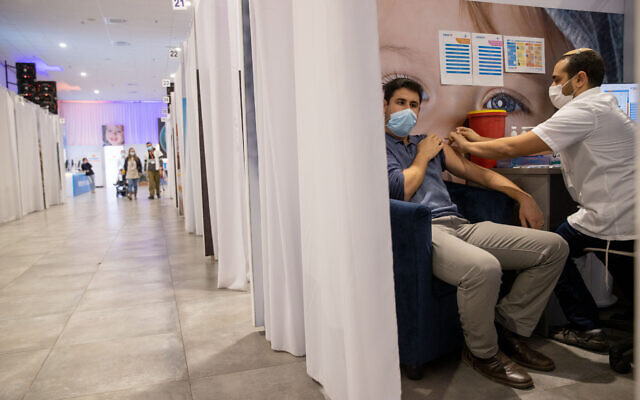 The efforts at obtaining the vaccines came as Israel for the second day in a row recorded more than 100 new COVID-19 cases. Daily caseloads had previously dropped to low dozens or even less, until the recent resurgence of patients, blamed on the highly infectious Delta variant of the virus.

The Health Ministry said Wednesday another 110 new coronavirus cases were identified the previous day, taking the number of active cases to 554. Tuesday’s new cases included 64 children and teens, and 14 individuals entering the country from overseas, the Kan public broadcaster reported.

In response, national virus czar Nachman Ash said that health officials would present the government with possible actions to curb the pandemic, including a potential imminent return of the indoor mask mandate.

Bennett was set to meet with senior officials on Wednesday to determine the next steps.

Prior to that, ministers voted to reestablish the so-called coronavirus cabinet, a panel of ministers tasked with forming policy to counter the virus outbreak.