A daughter of prize-winning Israeli author Amos Oz doubled down on allegations that she was “serially abused” by her late father, after her family disputed the claim.

“Ultimately, there are facts,” Galia Oz said in a clip of a Channel 12 news interview broadcast Monday. “There are no two sides here.”

Oz said she had a letter from her father in which he acknowledged physically abusing her.

“We’re already done with this game of ‘this happened or didn’t happen.’ He beat me,” she said.

Oz recalled being pained by the denials of her family and others, and insisted she was telling the truth.

“It was harder to be silent,” she said.

She also said the allegations would be part of her father’s legacy.

The interview came amid the release of Galia Oz’s new autobiography, “Something Disguised as Love,” which has shaken Israel’s image of the novelist, considered among the country’s greatest writers and a perennial Nobel prize favorite. Oz died of cancer in 2018.

“During my childhood, my father beat, cursed, and humiliated me,” she wrote.

“The abuse was creative: He would drag me around the house and throw me onto the stoop outside. He would call me garbage. He didn’t lose his cool and this wasn’t an occasional slap on the face, but a routine of serial abuse,” she said.

“My crime was that I am me, and so the punishment was unending. He needed to be sure I was broken.”

Writer Yehuda Atlas, a friend of Galia Oz, told Army Radio, “I knew about these stories. It’s difficult for us leftists, Amos Oz was our golden prince, but it seems even the moon has a dark side.”

But Oz’s widow and two other children pushed back against the portrayal of the novelist as an abusive father.

“We knew a different father. A warm, loving, attentive dad who loved his family,” widow Nili Oz wrote in a statement also signed by children Fania Oz-Salzberger and Daniel Oz.

“The claims that Galia levels against him are in total contradiction to our strong memories our whole lives,” they wrote, adding that they were surprised by the accusations.

They noted that Galia had not been in contact with the family for seven years, and that Oz tried until his dying day to connect with her and understand her claims against him.

“Galia’s pain is likely real and heartbreaking, but we remember differently. Totally differently,” they wrote.

Daniel Oz wrote in a Sunday Facebook post, “My father was not an angel, only a human being, but he was the best human being that I know.”

“Galia remembers that she experienced severe and abusive parenting at our father’s hands. I’m sure — I know — that there is a kernel of truth to her words. Do not erase her. But do not erase us either.” 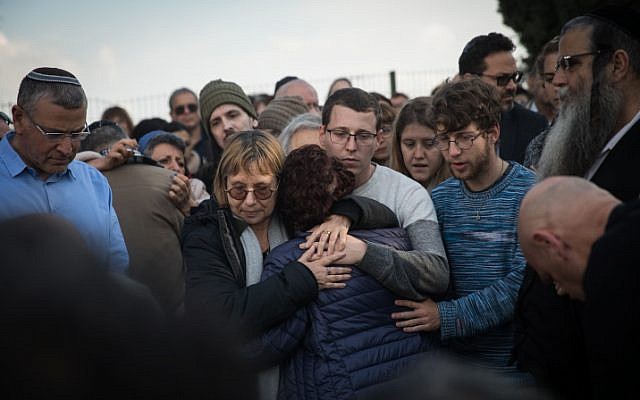 Friends and family mourn by the grave of author Amos Oz during a his funeral in Kibbutz Hulda, on December 31, 2018. (Hadas Parush/ Flash90)

Oz was Israel’s most widely read and best-known author, and was hailed by President Reuven Rivlin after his 2018 death as the country’s “greatest writer.”

He won dozens of awards, including the Israel Prize and Germany’s Goethe Award, and his books have been translated into 45 languages. He had repeatedly been mentioned as a leading candidate for the Nobel Prize for Literature, but it eluded him.

Born Amos Klausner in Jerusalem in Mandatory Palestine in 1939, the city would provide a canvas for many of his works, including “Black Box” and “In the Land of Israel.”

Oz was also among the country’s most vocal left-wing activists and supporters of a two-state solution.

In a career spanning half a century, Oz published over 35 books, including 13 novels, as well as children’s books and collections of short stories, and hundreds of articles on literary and political topics.