Petty spats between the leaders of the EU’s political institutions have led to critics saying that those at the top of the Brussels food chain are prioritizing their own careers and personal power over the lives of European citizens.
As the Covid-19 pandemic approaches something resembling its end, and geopolitical challenges — such as the fallout from the crisis in Afghanistan — take hold, this open disunity presents the bloc with a series of fundamental problems to which there are no obvious solutions.
First things first: The Union itself is not facing extinction. The EU has remarkable staying power and the self-interest of its member states means there is no real chance of it falling apart any time soon.
What is in question, however, is the Union’s long-term purpose and legitimacy.
Last week, EU Commission President Ursula von der Leyen wrote to the president of the EU Parliament, David Sassoli, declining to act on a resolution that had been passed by a huge majority in the EU’s legislative and only publicly elected body.
The Parliament believes that two member states, Hungary and Poland, have violated the EU’s rule of law and as such should have central funding halted. The offenses on which this is based range from violating the independence of the judiciary to discriminating against LGBT communities — both assaults on fundamental cornerstones of EU membership.

Parliament says that the Commission must now apply a regulation that was agreed last year, as the EU negotiated its long-term budget alongside Covid recovery funds. At the time, the regulation — which ties EU money to obeying the rule of law — was a priority. The tools at the EU’s disposal for punishing member states had proven inadequate.
However, when push came to shove and the two delinquent nations threatened to exercise their veto rights, the regulation was watered down to such an extent that it would require iron-clad evidence that EU funds were being used to violate the rule of law, rather than a broader interpretation of violations occurring in general.
“It’s fair to say that after the regulation was agreed, the parties most keen on taking action against Hungary and Poland hoped the Commission would take the political decision to take a broad interpretation,” says Ronan McCrea, professor of European law at University College London. “This could be the first sign it will take a more cautious approach.”
In the letter, von der Leyen said that Sassoli’s letter was not “sufficiently clear and precise” on exactly what violations had taken place, resting on the narrow nature of the “complex assessments” required to enact the regulation.
Parliamentarians who have spent the past few years highlighting abuses are spitting blood at what they see as von der Leyen’s complicity with violations.
“It is literally written into the treaties that the Commission is accountable to the Parliament,” says Sophie in ‘t Veld, a Dutch liberal MEP. 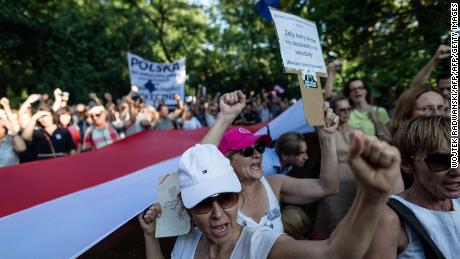 She and many of her colleagues and European officials believe that von der Leyen, rather than acting as guardian of the EU’s treaties, is acting in the interests of the governments of the EU nations that make up the 27-member EU Council. The more support that von der Leyen can elicit from the member states, the more power she has to ignore the calls of Parliament and work exclusively to her own agenda.
“She is in the job because Parliament gave up on electing its own candidate and rubber-stamped the member states’ candidate. She owes them to a certain extent,” Veld adds.
Daniel Freund, a German Green MEP, says that it’s always “difficult for the commission to go against a member state because they will always need their support down the line.” He adds that this might be particularly difficult for von der Leyen because she was elected with a majority that included Hungary and Poland’s political leadership — votes for which she willingly lobbied.
Politicking in Brussels is nothing new, and ardent Europhiles are sick of narrow interests at HQ overshadowing real issues facing the Union.
“So many people working at the EU level become obsessed with arguments over how the EU operates and who should have what power rather than getting on with making the Union fit for the 21st century,” says Neale Richmond, an Irish lawmaker who was previously appointed to represent Ireland in Brussels. 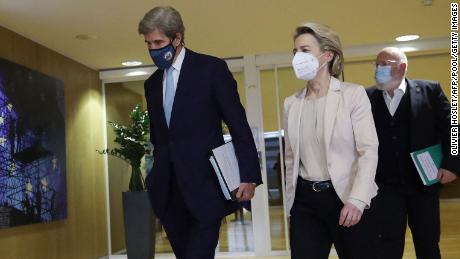 “For years now we’ve been debating the future of Europe and its position on the world stage. We all want a strong, open Europe that is united in promoting liberal values and a world leader on things like climate change and geopolitics. But that won’t happen if these petty inter-institutional squabbles keep getting in the way of everything,” he adds.
If the EU is to be its best self, its stakeholders at the very least need to believe that all parties are acting in good faith. This has become increasingly hard as the row over the rule of law has rumbled on.
“We have repeatedly seen Hungary block resolutions in the Council on things like human rights in Hong Kong or when fighting erupted in Israel earlier this year, presumably to poke the member states agitating against its own violations in the eye,” says Freund. Disunity and inaction on issues like these, of course, somewhat fly in the face of the EU’s goal to be a global promoter of democratic values.
And when the stakeholders are distrustful of one another, it can have real-world consequences.
“Previously when the question of refugees fleeing war zones has come up, the 27 member states have been more comfortable dealing with and paying autocrats to host refugees than reaching a sensible deal among themselves,” says Veld.
The lack of unity and painful process with which each decision is made means that the EU’s woes are often dealt with on an issue-by-issue basis, despite the fact its crises tend to dovetail.
Take the question of Afghan refugees. The EU said last week that it will aid those fleeing the Taliban by supporting regional partners to host refugees. It is also hellbent against repeating the migrant crisis of 2015 when millions traveled to Europe to escape Syria’s brutal civil war. 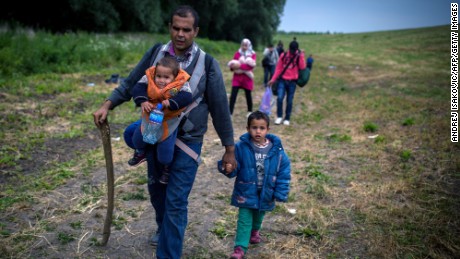 In 2016, the EU gave Turkey — a regional partner — cash to host Syrian refugees. Turkey was subsequently able to weaponize those refugees when it became politically convenient to do so. Why? Because member states were reluctant to welcome large numbers of migrants into their countries and in some instances took extreme measures to keep them out.
That migrant crisis played a large part in driving Euroskeptic, populist sentiment across the continent, as well as the victory of the pro-Brexit campaign in the UK in 2016.
Obviously, none of this was good for the EU, and it’s far from implausible that the current short-sightedness on Afghanistan could see this repeated.
This might seem a dramatic overreaction to a row between the European Parliament and Commission over whether to act on a resolution. But, as Freund points out, the rule of law debate really does get to the fundamentals of how the EU will face the challenges hurtling towards every corner of the planet: as a united group with a common purpose or a collection of more isolationist nation states.
“The way the row over Hungary and Poland has played is putting the whole EU into question. If member states don’t follow the treaties, if the Commission and Council don’t punish rule breakers, then what is left of the EU,” he asks.
These are questions that the bloc’s leadership will need to answer in the coming year, as Europe pieces itself back together after the pandemic, elections in its two biggest countries — France and Germany — and attempts to navigate the geopolitical minefield that the past 18 months has left the world in.
If the EU is serious about its ambitions to be a major power on the world stage and — in light of what’s happened in the past fortnight — step in where America might have previously, it needs all members on the same page and playing by the same rules.
The reality of this latest dilemma, however, is that keeping all 27 member states happy at the same time is a near-impossible balancing act. The longer these divisions exist, the wider the gaps in trust between stakeholders become. And at some point, that distance might become too large for anyone to bridge.
Free Download WordPress Themes
Premium WordPress Themes Download
Download Premium WordPress Themes Free
Free Download WordPress Themes
free download udemy paid course
download lava firmware
Download WordPress Themes Free
ZG93bmxvYWQgbHluZGEgY291cnNlIGZyZWU=