US Secretary of State Mike Pompeo has become the first representative of any American administration to tour an Israeli settlement in the occupied West Bank.

In a highly symbolic and controversial act, Mr Pompeo visited the Israeli-owned Psagot winery near the Palestinian town of Ramallah.

The visit comes a year since the Trump administration upended decades of US Middle East policy by announcing it no longer considered Israeli settlements in the West Bank to be contrary to international law.

The visit has further fuelled Palestinian anger towards the Trump administration and the government of Israeli Prime Minister Benjamin Netanyahu.

Palestinians deeply oppose the settlements which continue to be built on land they consider to be historically theirs for a future Palestinian state.

Speaking at a West Bank news conference, residents of the Palestinian town next to the Israeli settlement expressed their anger at the visit.

Muneef Traish, an Al-Bireh Municipality Council Member said: “We urge you to pass this message to the American people, to the people all over the world because of what Mr Pompeo is trying to do, he is trying to get legitimacy to the settlement activities in the West Bank against all rules and resolutions passed by the United Nations and by all international organisations.”

And Sam Bahour, a Palestinian-American businessman, described Mr Pompeo’s visit as “the act of a failed administration”.

He said: “This settlement is one of a hundred or so settlements throughout the West Bank – all of them are illegal no matter who visits them or who does not…

“This is an illegal act, it is an act of a failed [Trump] administration, trying to make himself relevant when he is one month away from being a nobody.”

Mr Pompeo arrived at the winery in a military helicopter and later flew north to the Golan Heights, captured by Israel from Syria in the 1967 war and later annexed in a move not recognised by the United Nations and most of the international community. 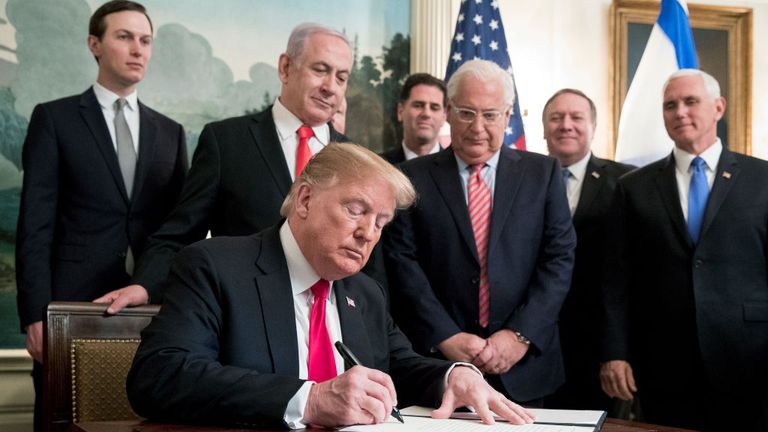 Under the Trump administration, major shifts in American policy in the Middle East have been pushed through to the delight of the Israeli government of Benjamin Netanyahu.

Speaking at a news conference alongside Mike Pompeo, Mr Netanyahu said: “Thanks to President Trump, the US recognised Jerusalem as Israel’s capital and moved its embassy here.

“Thanks to President Trump, the United States recognised Israeli sovereignty over the Golan Heights.”

He continued: “Thanks to President Trump, the US pulled out of the dangerous nuclear deal with Iran, placed crippling sanctions on the Iranian regime, and eliminated the mega-terrorist Qasem Soleimani.

“Thanks to President Trump, the United States proposed the first truly realistic plan for peace between Israelis and Palestinians. 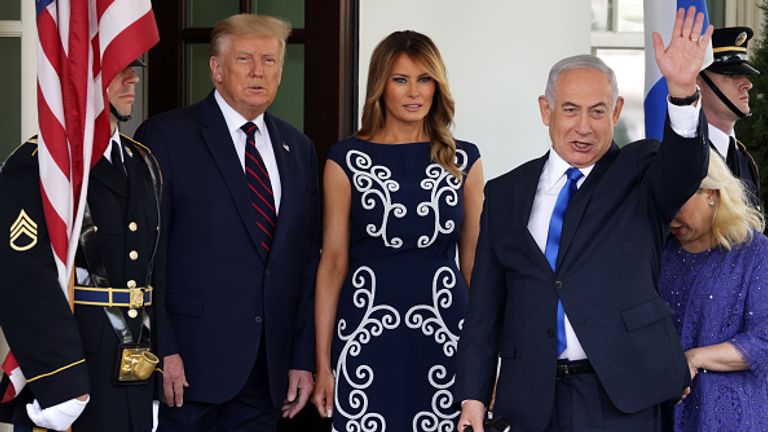 Image: September: Mr Netanyahu meets with Mr Trump and the first lady to sign normalisation accords with the UAE

“And thanks to President Trump, Israel was able to forge peace with three Arab countries: the UAE, Bahrain, and Sudan.”

The incoming administration of president-elect Joe Biden is not likely to reverse all the policy shifts, but is opposed to the continued settlement expansion.

Awkward confrontations between the Biden administration and the Israeli government are likely as settlement expansion continues.

Israel recently announced plans to build more than a thousand new homes in Givat Hamatos, a settlement between Jerusalem and the West Bank town of Bethlehem.

During his trip Mr Pompeo announced products made in settlements and sold in the United States can be labelled “Made in Israel”.

And in another policy shift he said the State Department will now regard the anti-occupation campaign known as BDS (Boycott, Divestment and Sanctions) as antisemitic and will stop government funding to groups supporting it.

This follows a longstanding Israeli government campaign to discredit the BDS movement as being fundamentally anti-Jewish.

BDS supporters say they are protesting against Israeli policy in the West Bank, including the presence of settlements, and seek to draw a distinction between being anti-Israeli and anti-Jewish.

Omar Shakir, Israel and Palestine director at Human Rights Watch, said: “US Secretary of State Pompeo is undermining the fight against antisemitism by equating it with peaceful boycotts.

“From Jim Crow South to apartheid South Africa, Americans have a long history of supporting boycotts. The Trump admin has no business tarring groups who do so.”

Raab 'concerned' about situation in Iran after killing of nuclear scientist