Anti-Semitic blogger, 56, who believes ‘Hitler was right’ is jailed for 18 weeks for saying Jewish people use Holocaust as ‘eternal cash cow’

Alison Chabloz (pictured outside court yesterday), 56, repeated her anti-Semitic comments on a US podcast which she promoted via a far-right social media website called Gab

An anti-Semitic blogger who believes ‘Hitler was right’ has been jailed after saying Jewish people use the Holocaust as an ‘eternal cash cow’.

Alison Chabloz, 56, repeated her anti-Semitic comments on a US podcast which she promoted via a far-right social media website called Gab.

Chabloz denied, but was convicted of, sending further grossly offensive comments on a public communications network at Westminster Magistrates’ Court.

The latest conviction put her in breach of a suspended sentence for similar previous offences.

‘I’m sentencing you on the basis that on two separate occasions whilst subject to a suspended sentence, you participated in a radio programme where you made grossly offensive comments.

‘The grossly offensive contributions by the defendant to both programmes are insulting to members of a vulnerable community.

‘The need to protect that community from such gross offence is a pressing social need.’

The blogger had stated that the Holocaust is used as an ‘eternal cash cow,’ and that Hitler wanted the Jews out of Europe for behaving ‘in a certain fashion as we’re seeing again today’.

She asserted that the gas chambers were not ‘homicidal,’ but used ‘to save lives from typhus epidemics’. Chabloz added that Jews who ‘don’t conform’ should be deported.

On the Graham Hart show she asserted that the Holocaust is a ‘central pillar’ of Judaism and that Jewish children are brought up to be ‘psychopathic maniacs’.

Giving evidence Chabloz refused to accept that her comments were grossly offensive. 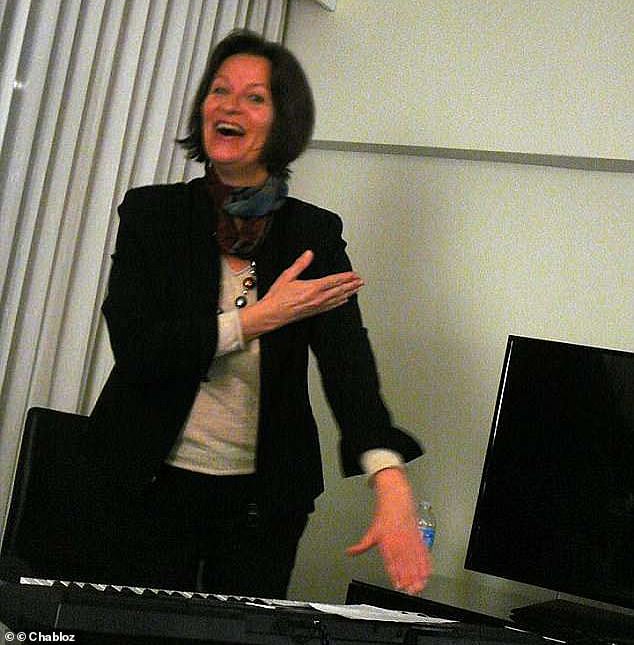 Benn Maguire, prosecuting, asked: ‘Do you accept that saying the Holocaust was used for Zionist lobby and is an eternal cash cow is offensive?’

Chabloz replied: ‘I would say that there’s a great deal of evidence to show that that’s the case.

‘Individuals who got publishing deals who weren’t in Germany during the war…. and weren’t even Jewish.’

When asked why she said ‘Six million jews blah, blah, blah,’ she described the Holocaust death toll as a ‘claim’ which has been ‘repeated’ since 1880.

‘People don’t go to church any more, but are supposed to worship Jews,’ she added.

The music teacher was convicted of three charges for posting offensive songs about the Holocaust and handed a suspended jail sentence in May 2018.

In the songs, Chabloz, who refers to herself a ‘historical revisionist’, sings: ‘Did the Holocaust ever happen? ‘Was it just a bunch of lies? Seems that some intend to pull the wool over our eyes.’ 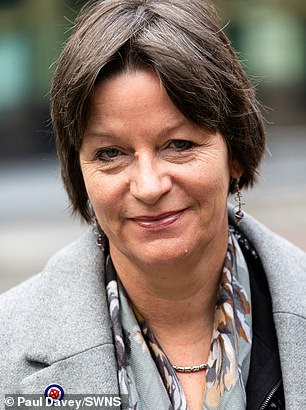 The musician claims in the podcasts that Jewish parents are ‘indoctrinating their children that their grandparents were gassed because they were Jews’, turning the children into ‘psychopathic maniacs’, the court heard

She said Auschwitz is ‘a theme park just for fools’ and ‘the gassing zone, a proven hoax, indoctrination rules.’

The Holocaust denier appealed against the convictions – but a judge upheld them at Southwark Crown Court in February 2019.

Chabloz has since allegedly breached her suspended sentence by ranting anti-Semitic comments as she telephoned in twice as a guest to anti-Semitic far-right podcasts, Realist Report and The Graham Hart Show.

The musician claims in the podcasts that Jewish parents are ‘indoctrinating their children that their grandparents were gassed because they were Jews’, turning the children into ‘psychopathic maniacs’, the court heard.

She also claimed the Auschwitz gas chambers were fake, and that Jews ‘were promoting homosexuality, promiscuity, the same things they are promoting today’ in Weimar Germany.

Giving evidence Steve Silverman, Director of Investigations for the Campaign Against Antisemitism (CAA), said: ‘The entire programme was abusive, hateful, with regards to anti-Semitism.

‘It was appalling, as part of the work that I do as a part of the Campaign against anti-Semitism, I have to listen to some grossly hateful content.

She was defended by Adrian Davies, formerly of the British Democratic Party, who has previously represented high-profile Holocaust denier David Irving.

Mr Davis, defending Chabloz, has said her remarks ‘constitute political speech and are prima facie protected as such by Article 10 of the European Convention on Human Rights.’

‘It may well be that Mrs Chabloz would do well to curb her tongue. It should not be held against her that she was previously convicted.

‘This case must be tried on its own facts and they are very strange, I say absent any evidence it cannot be proportionate to convict her of this offence.’

Prosecutor Benn Maguire said: ‘The defendant’s participation in the radio programmes go beyond the mere expression of an unfashionable opinion, permissible satire or iconoclastic comment.

‘The content of the radio programmes are anti-Semitic, targeted against the Jewish people as a whole, and use both their content and their tone to ensure maximum offence, upset and hurt. 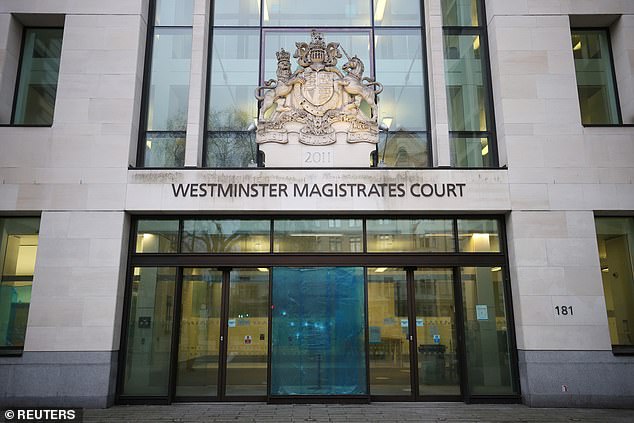 ‘By the standards of an open and multi-racial society, the radio programmes are ‘grossly offensive’.’

Chabloz, of St Johns Wood, London, was convicted of three counts of sending by a public communications network an offensive, indecent or menacing message or material.

She was sentenced to a total of 18 weeks jail.

Chabloz had been banned from broadcasting, posting on the internet or in any form, any reference to Judaism, the Jewish faith, the Jewish people, the Holocaust, World War two, Israel, or any member of the Nazi party.

Chabloz was previously convicted in June 2018 for writing three vile songs mocking the Holocaust, which she sang and uploaded to YouTube.

The songs suggested the Holocaust, which saw six million Jews killed by Nazi Germany during World War Two, was a ‘bunch of lies’ and referred to Auschwitz as a ‘theme park’.

She also mocked Anne Frank and laughed during her earlier trial as the court heard how she mocked Jews being fashioned into lampshades, having their heads shrunk and being turned into bars of soap.

She was given a suspended prison sentence and banned from social media for 12 months.