Lucy Aharish, a prominent Arab Israeli media personality and outspoken critic of Prime Minister Benjamin Netanyahu, gave a heartfelt interview over the weekend in which she spoke candidly about her marriage to Israeli actor Tsahi Halevi (of “Fauda” fame), the recent birth of their first child, the difficulties of life in Israel as an interfaith couple, and the barrage of hateful comments they receive, mostly online.

Aharish and Halevi’s wedding in 2018 drew widespread condemnation from the Israeli right, with politicians weighing in and some ministers publicly berating them at the time.

In a Channel 12 interview on Friday, Aharish, 39, said the past two and a half years since the wedding have “not been easy.” She described how the couple suffered through multiple miscarriages and lamented the loss of her prime-time TV spot as Israel’s first Arab anchor on Channel 13 following what she believes was political pressure.

Known among Jewish Israelis as a moderate Arab voice, Aharish has taken pride in the Jewish state and has openly criticized both Israeli Jews and her fellow Arab Israelis. She has been widely admired and, in 2015, was awarded the honor of lighting a torch at the national Independence Day ceremony on Mount Herzl for her work as a “trailblazing Muslim journalist who brings a discourse of tolerance and interdenominational openness to Israel’s public agenda.”

But over the past few years, “I found myself in a downward spiral — career-wise, personally, spiritually,” she revealed on Friday, adding that for the first time, she sought therapy. “After everything I’ve been through; a terror attack, hateful comments, curses, other difficulties, [all these] didn’t lead me to see a therapist.”

“I felt I needed a moment to bare my soul, to speak out,” she said.

Aharish grew up in the southern Jewish development town of Dimona with secular parents who moved from Nazareth in the early 1970s. She spoke both Hebrew and Arabic and was the only Muslim child in her class, where she struggled with her identity and was subjected to bullying.

She and Halevi kept their relationship secret for years before it became public ahead of their wedding, amid fears of public criticism, or worse. 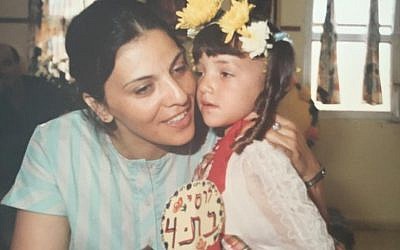 “She accepted me with open arms from the first moment. Today, I see our families sitting together around the Shabbat table. It’s not something that can be taken for granted. The moment our families met, they understood how similar we were. People don’t understand how natural and normal it is [the connection between them],” she said.

Aharish gave birth to her first child, and Halevi’s second, in February, naming him Adam Aharish Halevi. She speaks to him in Arabic, saying it was a joint decision but also revealing that Halevi has teased her that the fluency of the boy may be in question if she is in charge of teaching him the language. Halevi is fluent in six languages, including Arabic. 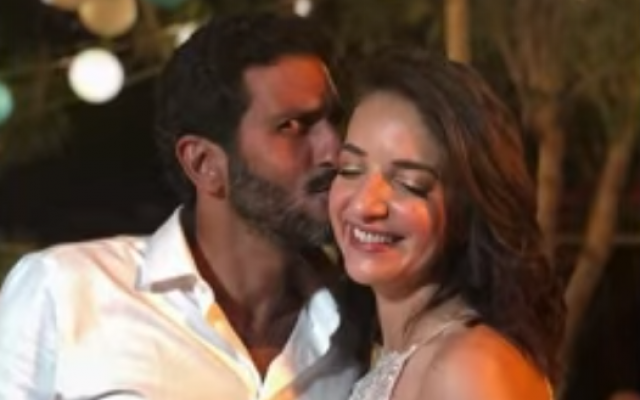 Today, in Tel Aviv, her son “won’t be the only ‘oddball’ child with the problematic identity,” she said on Friday.

“I don’t have to tell you about the labels kids use,” she told Channel 12. “‘This one has two moms, this one has two dads, and this child has a transgender mom, or a single mom who set out on her own to have the kid, and there’s the kid who has an Arab mom and a Jewish dad.’” 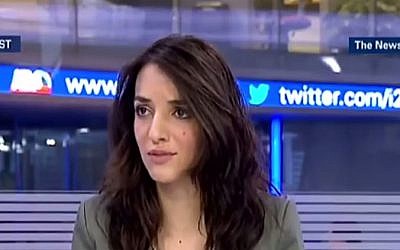 “I look at him now and I am amazed,” Aharish said of her son. But she also tearfully recalled some of the comments she received when the pregnancy was first announced. Someone had wished her a stillbirth, she said, asking: “Where does this evil come from? To hope someone gives birth to a dead child? Where does this come from?”

“Why? Why? Why? Because I’m an Arab woman who married a Jewish man? Because I disagree with some [political] opinions? Because I voice my criticisms and say things that people may not agree with?” she went on.

“Sometimes, I feel like I just want to crawl into bed and never stop crying,” she said tearfully. “I’m scared of the world into which I am bringing my children.”

Aharish and Halevi have had to navigate a complicated reality since the birth, she recounted. While they were registering Adam’s birth at the hospital, she spotted the word “Jewish” next to nationality in the form and drew Halevi’s attention to the document. “The clerk paused and asked him if he was not Jewish, to which I responded, ‘He is, I’m not,’” Aharish said.

In response, the clerk offered to write in “no religion” and Aharish said she gladly agreed. But Adam, she said, will make his own decisions. 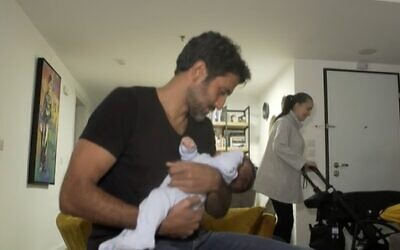 “He lives in a home where there are two cultures, where there is understanding and consideration, where if he wants to read from the Torah, I’ll go with him, and if he wants to convert to Judaism, he will. There is no problem with that,” she said.

“The child had a brit mila [circumcision],” she revealed, recalling how the ceremony elicited some chatter. “We [Muslims] also have circumcisions, did you not think of that?”

Aharish said that whereas she couldn’t sing Israel’s national anthem, Hatikva, growing up because “I don’t have a Jewish soul. My child does. Half his soul is Jewish. He’s half Arab, half Jewish. He can sing Hatikva.”

And “of course” he will serve in the Israeli military, she said.

“My child is a part of this country,” whether politicians like Bezalel Smotrich, the far-right leader of the Religious Zionism party, “like it or not,” she said.

Aharish was responding to a tweet issued by Smotrich while the interview was filmed on April 7, in which he said that “true Muslims understand that Israel belongs to the Jewish people, and over time… Arabs who do not recognize this, will not stay here.” 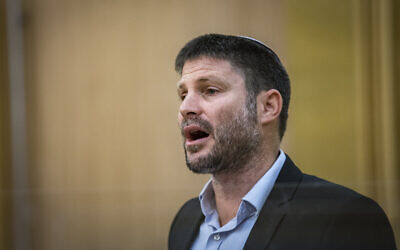 “This is racism, this is anti-Semitism,” Aharish said. “Anti-Semitism is not just against Jews, it’s against the Semitic race to which I belong.”

“Smotrich is an anti-Semite,” she declared. “I’m telling him now, it won’t happen [we won’t leave]. We’re going to stay here like a lump in your throat, in yours, and in all those of the racists like you. Me and my half-Muslim, half-Jewish child.”

Aharish has faced her fair share of such comments. In 2014, Bentzi Gopstein, head of the “Lehava” anti-assimilation organization, told her during an appearance on her current events program on Channel 2 at the time, that as an Arab citizen “You’re not supposed to be here” in the Jewish state. When Aharish replied that she wasn’t going anywhere, he retorted, “We shall see.”

Two years later, Gopstein appeared to threaten her during a commemoration of slain extremist rabbi Meir Kahane in Jerusalem, when he held up a cleaning rag with her picture on it and warned that she would soon be mopping floors.

During the interview, Aharish also laced into Netanyahu, whom she has repeatedly criticized, and his attempt in the latest election campaign to appeal to the Arab vote. Aharish said that if the prime minister had been “forced to campaign with [the late Palestinian Authority chief Yasser] Arafat, he would have.”

She responded to a pre-election day interview on Channel 12 in which Netanyahu gave himself the Arabic-language nickname ״Abu Yair,״ by mocking the prime minister.

That talk about the youths and calling him “Abu Yair,’ she said. “Really? Who is this [lie] working on?” 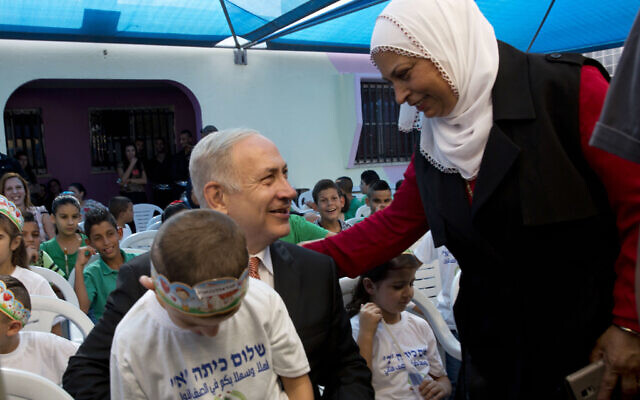 Illustrative: Prime Minister Benjamin Netanyahu poses for a photograph with pupils on the first day of school in the Israeli Arab town of Tamra, Thursday, September 1, 2016. (AP/Sebastian Scheiner)

Despite the hardships, Aharish expressed gratitude for her relationship and family.

“In my home, I have everything I have ever wanted in life — tolerance, acceptance, love, respect for others. And I suddenly understood that all those people who curse at me, and say things about me, don’t have an eighth of what I have,” Aharish said.

“You have everything you want,” she told herself. “You have won against the Smotriches” and others like them.