About 200 people protested outside the residence of France’s ambassador to Israel Saturday against President Emmanuel Macron, after he vowed his country would not “give up cartoons” depicting the Prophet Mohammed.

Protesters, some of them wearing surgical face masks in keeping with coronavirus regulations, carried banners in Arabic in support of the prophet, AFP journalists at the scene said.

The demonstration was held in the largely-Arab district of Jaffa in Tel Aviv, after Muslim evening prayers.

One of the demonstrators, Amin Bukhari, accused Macron of playing the game of “the extreme right.”

“The Prophet Mohammed is the most sacred thing in Islam and whoever attacks his honor, attacks an entire people,” he told the crowd.

Arab-Israeli protesters gather outside the residence of the French Ambassador to Israel, in Tel Aviv on October 24, 2020, in response to comments by French President Emmanuel Macron defending cartoons of the Prophet Mohammed. (JACK GUEZ / AFP)

Macron on Wednesday said a French teacher beheaded outside his school outside Paris earlier this month “was killed because Islamists want our future.” 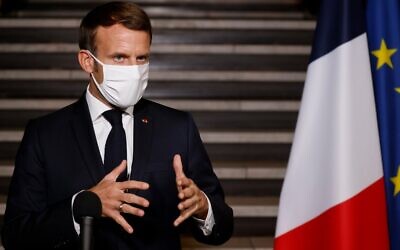 French President Emmanuel Macron delivers a speech at the end of a visit on the fight against separatism at the Seine Saint Denis prefecture headquarters in Bobigny, northeastern suburbs of Paris, on October 20, 2020. (Photo by Ludovic MARIN / various sources / AFP)

The teacher, Samuel Paty, was murdered after he had shown cartoons of the Prophet Mohammed during a class he was leading on free speech.

“We will not give up cartoons,” Macron said, declaring that Islamists “will never have” France’s future.

Speaking outside the official residence of French ambassador Eric Danon, Bukhari said “we must respect Moses among the Jews, we must respect Jesus Christ who is our prophet too, and we must respect the Prophet Mohammed, peace be upon him.”

The gathering dispersed without incident.

Visual representation of the prophets is strictly forbidden in Islam and to ridicule or insult the Prophet Mohammed is punishable by death in some Muslim countries.

The Gaza Strip’s Islamist rulers Hamas are among those to have condemned Macron’s comments.

“Insulting religions and prophets is not a matter of freedom of expression, but rather promotes a culture of hatred,” Hamas said in a statement, warning of unspecified “consequences.” 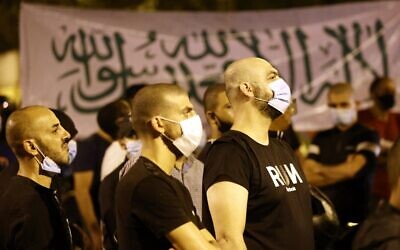 Arab-Israeli protesters gather outside the residence of the French Ambassador to Israel, in Tel Aviv on October 24, 2020, in response to comments by French President Emmanuel Macron defending cartoons of the Prophet Mohammed. (JACK GUEZ / AFP)

The smaller Islamic Jihad group, which likewise operates in the Palestinian enclave of Gaza, said that offending Islam and its prophet crossed a “red line” and “could not be tolerated.”

Calls to boycott French goods are growing in the Arab world and beyond, in response to Macron’s comments.

In Doha, an AFP correspondent saw workers stripping shelves of French-made St. Dalfour jams and Saf-Instant yeast in a branch of the Al Meera supermarket chain on Saturday.