An Arab man who on Wednesday was attacked and savagely beaten by a Jewish mob in Bat Yam has spoken about the ordeal, while still calling for Jewish-Arab coexistence.

Saeed Mousa, a father of four from Ramle, was in his car on his way to enjoy some fresh air at the beach after dark when he was accosted by dozens of far-right Jewish extremists, out rioting and vandalizing Arab property in what they said was a response to Arab riots and mob violence that erupted during the week.

Mousa was standing in traffic when he was identified as Arab by the hooligans, who attacked him.

“I was going to the beach. I didn’t know they’d started distinguishing between Jews and Arabs [in the country],” he told Channel 12 from his hospital bed at Ichilov Medical Center.

Screen capture from video of a crowd of Jewish protestors pulling an Arab man from his vehicle in Bet Yam, May 21, 2021. (Twitter)

“I was in the road. Someone came to me and asked me, ‘What, are you an Arab?’ I told him ‘Yes, is there a problem with that?’ After that I saw 30 people gang up on my car,” he recounted.

Mousa attempted to reverse away from the mob but hit a car behind him. He then accelerated forward, with people jumping out of the way, before crashing into another car. He was then dragged out of the car by the mob, with some now claiming he had attempted to run over the pedestrians, and beaten badly.

Mousa was taken to Ichilov in serious condition. By Saturday his condition was much improved.

“I was going to the beach, [for] time off. I didn’t know I was going to come back like this to my kids,” he said, pointing to his bruised face. “Why am I to blame? What did I do to deserve this? Is it my fault I was born Arab?”

Despite his difficult experience, Mousa called for peace between Jews and Arabs.

“We’re all human beings. We’re all living together, a long time,” he said.

The past week has seen escalating ethnic tensions between Jews and Arabs inside Israeli cities amid the ongoing armed conflict with Gaza.

On Wednesday, Israel experienced its worst night of internal Jewish-Arab chaos for many years, as scenes of unrest, rioting, hate rallies, and growing social chaos spread throughout numerous cities, some of which had been seen as symbols of coexistence.

Several people, both Jewish and Arab, have been assaulted and seriously wounded in shooting incidents and beatings.

On Thursday night, two civilians and a policeman were reported to have been shot by Arab assailants in Lod and Ramle, and in Jaffa a 19-year-old soldier was in serious condition after being beaten and was suffering from a skull fracture and a cerebral hemorrhage, Ichilov Medical Center in Tel Aviv said.

In Jaffa on Friday night, a home in the Ajami neighborhood was firebombed, injuring two Arab children — a 12-year-old boy and a 10-year-old girl — and prompting police to launch an investigation. Surveillance footage from the incident showed two hooded figures walking in an alleyway near the home before it was attacked. 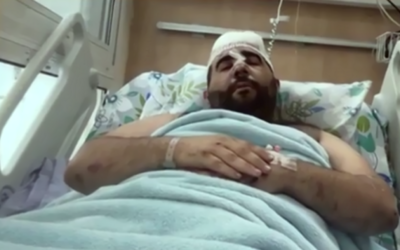 Mor Ganashvili, an Israeli man who was assaulted by an Arab mob, at Ichilov Medical Center, May 14, 2021 (video screenshot)

Mor Ganashvili, a man who was seriously wounded after being assaulted by an Arab mob in the northern city of Acre on Wednesday told Channel 12 he recalled thinking he wouldn’t make it out alive.

“The crowd just broke into my car. They tried to open the door to pull me [out] and attack me,” he told the network on Friday.

Israel’s leaders have pleaded for calm while calling up reserves forces in the police and Border Police as regular law enforcement has been overwhelmed by the number of violent incidents throughout the country.

Hundreds of people have been arrested for involvement in rioting.

Arab protests in support of Palestinians in Jerusalem and on the flashpoint Temple Mount/Haram al-Sharif holy sites spread across the country at the start of the week, touching off revenge attacks by Jews. Several people have been shot by assailants and others have beaten by angry mobs on both sides, with many of the attacks caught on camera. 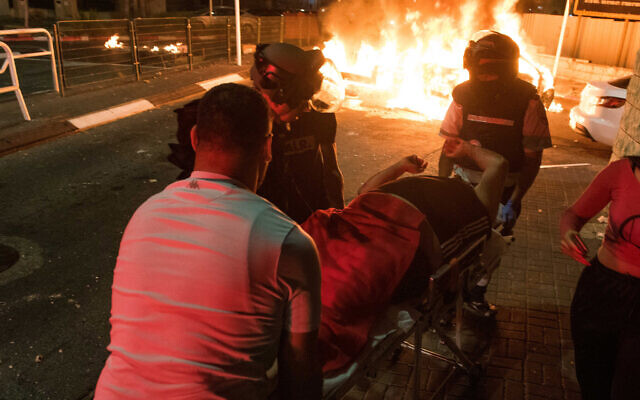 Medics evacuate an injured man during clashes between Arab and Jews in Acre, northern Israel, May 12, 2021.  (Roni Ofer/Flash90)

On Friday Israel’s Shin Bet security agency announced it would be assisting in efforts to prevent violence between Jews and Arabs in cities where both live, which it called “terror for all intents and purposes.”

“We won’t allow violent rioters to impose terror on the streets of Israel, either by Arabs or Jews,” Shin Bet chief Nadav Argaman said, adding that the Shin Bet will use all its capabilities and act against “whoever tries to harm Israeli citizens, Jews or Arabs, until the calm returns to the streets of the country.”

The local unrest between Jews and Arabs came amid renewed fighting between Israel and Gaza terror groups, with some 2,300 rockets fired from the enclave since Monday night, killing 10 in Israel. The IDF has responded with airstrikes on Gaza, which have killed 139 according to the Hamas-run health ministry. Israel says dozens of those killed in Gaza were terrorists.