Arab medical staff left their homes for days at a time to keep a hospital in the range of Gaza rocket fire running smoothly — and so their Jewish counterparts could have a break over the Shavuot holiday earlier this week.

Amid rocket fire and with Arab-Jewish violence on streets, many Arab staffers at Assuta Hospital in Ashdod, which is about 15 miles from the Gaza border and has treated 111 people who have suffered from the ongoing violence, said they were scared by their commute to work.

But they were determined to carry on reporting for duty, and to do extra shifts so that Jewish staff could have time off for the festival of Shavuot, which was observed on Monday.

“Some of the Arab employees had trouble coming from their villages, and were afraid people may hit or attack them on the roads,” director-general Dr. Erez Barenboim told The Times of Israel, referring to street violence that has seen both Jews and Arabs hurt by extremist rioters from the other side.

The hospital has started giving staff rides to and from the hospital, to hubs near their homes, in reinforced buses. But for staff who live in outlying Arab villages, it was impractical to cover every journey with this service. Some felt they were faced with a stark choice between their own safety and loyalty to the hospital at a time of crisis.

Quickly, many volunteered to sleep close to the hospitals. Around 50 people have spent the last few days in hotels, many of them since Sunday.

“Thanks to Arab workers taking time away from their families, and actually sleeping near the hospital, we have been managing to keep running, and even gave Jewish workers a much needed break over Shavuot,” Barenboim said.

He said that last week many Jewish staff took on extra shifts so that, despite the extra pressure from the security situation, a large part of the Arab workforce could spend the Muslim festival of Eid al-Fitr with their families. 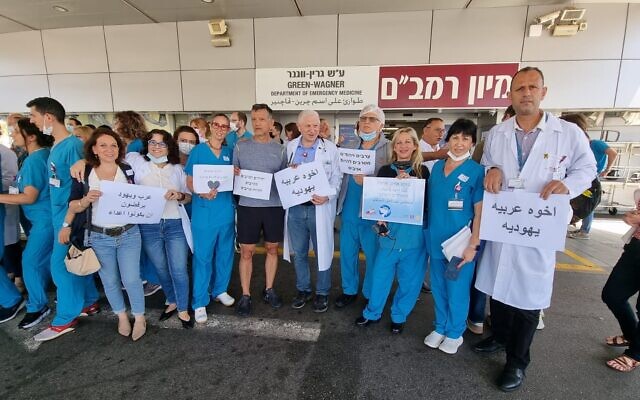 Hospitals have come into the limelight in Israel over recent days for showcasing coexistence as Arab-Jewish frictions rise elsewhere. There is a disproportionately high number of Arabs working in healthcare.

On Sunday, Rambam Health Center in Haifa held its second coexistence initiative in a week: a rally with almost 100 Jewish and Arab medics.

They waved banners with slogans like: “Jews and Arabs refuse to be enemies.”

Dr. Diab Motlek, an Arab cardiologist who organized the rally, said: “We all work shoulder to shoulder in wards and operating rooms. We’re one big family and that’s our message.”