As Israel gets a COVID reality check, doctors are increasingly pressing for the country to launch an all-out effort to vaccinate some 200,000 over-50s who have so far refused the vaccine and are at most risk of serious illness if infected.

The Delta variant is spreading fast in Israel, with 450 new COVID-19 cases confirmed on Thursday, and a total of 3,691 people infected. The government is reporting that vaccines are less effective in preventing infection by Delta than other strains of the coronavirus.

Until a week ago, the spike wasn’t translating to hospitalizations, but over the last week the number of COVID-positive Israelis in hospital has risen from 54 to 70. The number of patients in serious condition has grown from 26 to 39, and Israel reported two coronavirus deaths on Thursday, the first pandemic fatalities in more than two weeks.

As of Friday, 5,712,644 Israelis had received a first dose, while 5,189,094 were fully vaccinated out of a population of some 9 million. However, most of the unvaccinated were young people, with shots for those aged 12-15 only recently approved and under-12 not yet authorized.

Medical experts are clear that the ultimate worry as the Delta variant spreads isn’t high infection numbers, but rather that these could herald many seriously ill patients. And the higher the age of those infected, the higher their chance of getting seriously sick.

So there have been raised eyebrows over the conspicuous absence of a big campaign to galvanize some of the 200,000 over-50s Israelis who aren’t vaccinated — even as the government runs a major government campaign for teen vaccination. It is led from the top, with Prime Minister Naftali Bennett taking his daughter for a vaccine and posing for photos.

“There’s value to teen vaccinations, but if you want to prevent morbidity, a single vaccination for a single older person has the value of 50 teen vaccinations or more,” leading epidemiologist Prof. Hagai Levine told The Times of Israel on Thursday, noting that the number of older adults getting vaccinated has stagnated.

An Israeli receives a COVID-19 vaccine at a sports hall turned into a Clalit Health vaccination center in Hod HaSharon, February 2, 2021. (Miriam Alster/Flash90)

Prof Mordechai Gerlic from Tel Aviv University’s Center for Combating Pandemics thinks that 100,000 over-50s would agree to shots if reached with the right approach. He said: “The rest of the population is largely safe, but the older age group is at risk and we should actively pursue vaccinating them.

“Some of them are against the vaccine, people who there’s no way to get vaccinated, but I think around half are people who have not got vaccinated so far but who may well agree.”

This would bring a major reduction to Israel’s coronavirus vulnerability, he argued.

Levine agreed with Gerlic’s estimate that half of unvaccinated over-50s could be persuaded. He said that one of the two COVID-19 deaths seen this week illustrated his point: the death of a man, 48, who hadn’t taken a vaccine. Levine, a Hebrew University professor and until recently head of Israel’s public health physicians union, said the fact that even a man not quite 50 died illustrates the strategic value of pushing to vaccinate the 50-plus age group.

He said that the vaccines stats released this week also underscores this. The government announced that as of June 6, the vaccine provided 64% protection against infection, a major drop from 95.3% reported in May before the Delta variant found its way to Israel. Yet it remains highly effective — 93% — in preventing serious disease. 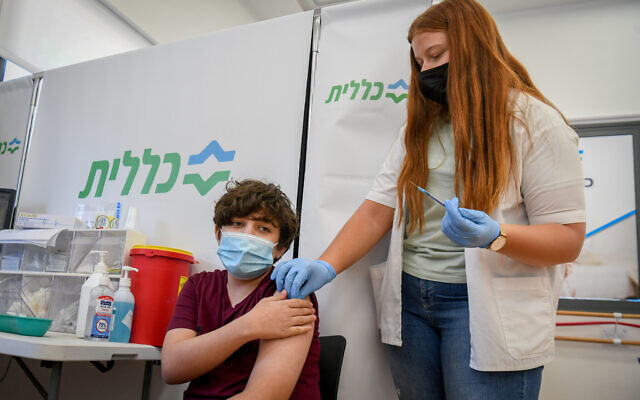 While the vaccine doesn’t prevent risk of infection, it is doing a good job at downgrading the danger associated with infection, and therefore should be promoted hard to the 50-plus, said Levine.

On the ground, in Israeli healthcare organizations, some leading figures had similar reactions to the vaccine stats. Dr. Doron Dushnitzky, head of coronavirus patient care for the Leumit healthcare organization, said: “They raise a concern that the disease will spread, and therefore underscore that protection of the elderly is very important.”

He said that the healthcare organizations (HMOs) like his have done as much as possible and have done their best to persuade those in their 50s to vaccinate, but said that “tens of thousands more” could vaccinate in the context of a sustained national campaign. 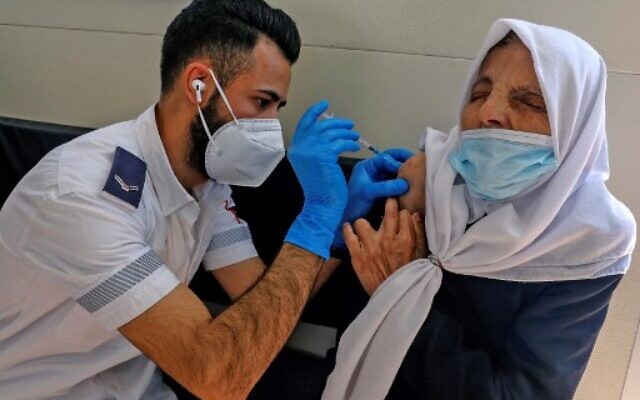 A paramedic with Israel’s Magen David Adom medical services vaccinates a Palestinian woman in a mobile clinic on February 26, 2021, at the Damascus Gate in Jerusalem’s Old City. (AHMAD GHARABLI / AFP)

“There should be a joint effort, with commercials by the Health Ministry coupled with initiatives by the HMOs,” he said, adding: “I’m not aware of any special ventures now to tackle this population, but I think it should happen. The highest risk patients should be regarded with more priority than others.”

The Health Ministry did not respond to a Times of Israel request for comment.

The HMOs have phoned and texted the unvaccinated, but Dushnitzky said that they have “squeezed the lemon dry” as much as they can do alone in recent weeks, and they need the government to make “a buzz in order to create an effect.”

Levine and Gerlic went further. They would like to see a national initiative to contact all over-50s and invite them for a one-on-one consultation with a doctor to discuss the vaccine. “Get them appointments at clinics, at home, on Zoom or however else it can be done,” said Gerlic.

Levine, who agrees with Gerlic’s estimate that half of unvaccinated over-50s could be persuaded to take shots, said: “Of course they have the right not to be vaccinated, but should at least be called for medical appointments to discuss the possibility. For these 200,000 Israelis over 50, we need a more tailored approach.”