For many of the diners at the Marinado steakhouse in northern Israel one night last week, it was their first time going out for a meal in a year. People excitedly snapped selfies as they waited for trays of grilled meats. Wide spaces were left between the tables in accordance with the rules, meaning the family-owned establishment could only host about half its normal capacity.

Eight or so waiters scurried to and fro, taking orders and bringing out food and drinks for the first time in many months, time many of them had spent on unpaid leave. Four other waiters had not returned. Two had been laid off and two others had said the government benefits for those on furlough made returning to work not an attractive prospect for them.

A few miles up the road, at the Setai Hotel on the shores of the Sea of Galilee, a handful of guests sat on lounge chairs around a placid infinity pool, happily soaking up the sun and the breeze and the fact that they were allowed to enter and enjoy the hotel amenities, thanks to having been vaccinated. The lifeguard, 29-year-old Tamir, said he was happy to be back at work. Save two weeks during the summer when the pool had briefly reopened, he had spent almost the whole last year on furlough.

As Israel celebrates the reopening of its economy spurred by the world-breaking speed of its vaccination drive, restaurant reservations are booming, bars and cafes are teeming, and hotels are reporting that they are fully booked for the upcoming Passover holiday.

But even amid the “post-COVID exuberance,” as Bank Hapoalim economists put it in a note this week, there are concerns that the unemployment crisis created by the pandemic may linger for years to come, as the labor-intensive service sector struggles to get back to pre-COVID level of activity and those laid off for long months contend with the challenges of reintegrating into the workforce.

To help jumpstart the return of parts of the workforce, the ministry has launched a Back to Work program, offering grants to furloughed employees who go back to work when they can, in an attempt to offset the unfortunate fact that some were opting to stay unemployed as long as they remained eligible for state-funded furlough payments — until June, for many.

People shop at Dizengoff Center in Tel Aviv on February 22, 2021, after it reopened following a few weeks of lockdown. (Miriam Alster/FLASH90)

“Unemployment is the weak point and the challenge to policymakers,” said former governor of the Bank of Israel Karnit Flug, who is now vice president of research and the William Davidson senior fellow for economic policy at the Israel Democracy Institute. “If during the pandemic last year Israel fared relatively okay in terms of loss of output, with a relatively small decline in GDP, the effect on the labor market has been not less severe than in other countries.”

Israel imposed three lockdowns in the past year to curb the virus, which have taken a toll on the economy and caused the number of jobless to surge to record highs of over 1 million people last April, or a broad unemployment rate of some 36.1% according to Finance Ministry data, which took into account the unemployed, furloughed workers and the newly unemployed people who are not seeking work.

The Israeli economy has, however, shown surprising resilience in the face of the pandemic. Its gross domestic product shrank by 2.4 percent in 2020, the first contraction since 2002 and the worst recession ever to hit the nation, but still a far cry from the doom and gloom projections of a 6% or even 7% contraction forecast by economists as the coronavirus hit last year. The economic decline was far better than the average 5.5% GDP drop in OECD countries in 2020. 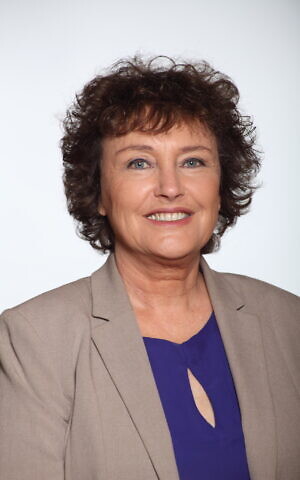 At least part of that is thanks to the nation’s high-tech sector, which continued to boom during the pandemic.

However, tech accounts for a very small percentage of the labor force, employing less than 10% of the population.

The tech sector is “not a labor-intensive industry,” Flug said. “The industries that suffered the blow, like everywhere else in the world, are the ones that are more labor-intensive, like the tourism and hospitality sectors, restaurants and basic services like hairdressers.”

According to data compiled by the Employment Services Agency, during January, when the third lockdown was imposed, there were 856,924 registered jobseekers, half of whom had been unemployed for more than half a year continuously.

The Employment Services Agency said that as of Thursday, this number had fallen to 560,628, of whom 55.3% were previously furloughed workers. Of the 201,314 people who have gone back to work since the exit from the third lockdown, 48.6% are below the age of 34, as they constitute the majority of those employed in the establishments that are now opening up, such as restaurants, bars, cafés and hotels. Some 66% of those who have returned to work are women, the data showed, as they, along with the younger and less-affluent populations, were those most affected by the pandemic. The agency said it expected even more people to go back to work after upcoming Passover holiday. 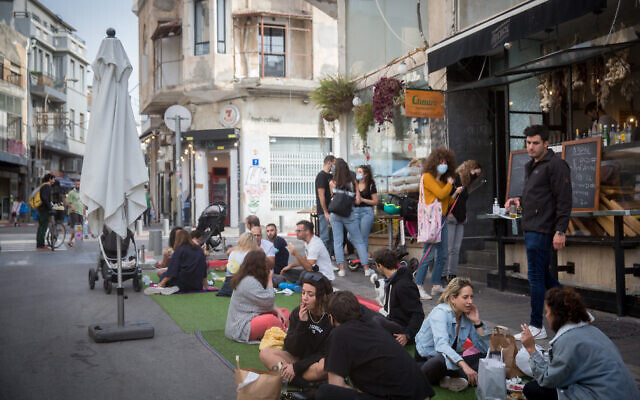 Israelis enjoy the Levinsky market in Tel Aviv, as Israel exits a 3rd lockdown due to the COVID-19 coronavirus pandemic. February 08, 2021. (Miriam Alster/FLASH90)

Experts fear that the longer people stay out of work, the harder it will be for them to jump back in, as they lose skills and increasingly become disconnected from the labor market. Unemployment, which was at a record low 3.8% before the pandemic, could become chronic, and an intrinsic part of the post-COVID economic scene.

“Continued unemployment significantly hampers the chances of getting back to work,” said Rami Garor, the head of Israel’s Employment Service Bureau, in a statement on March 11.

According to the Central Bureau of Statistics, in the first half of February 2021, unemployment was around 18.2%, and there were a staggering 12.4 jobseekers for every job opening, down from 15 at the height of the pandemic but still light years away from the average 1.6 jobseeker per opening in 2019. Data from March, the first month in which lockdown restrictions will have been largely lifted, will be key for policymakers to see if jobs and workers are indeed bouncing back. 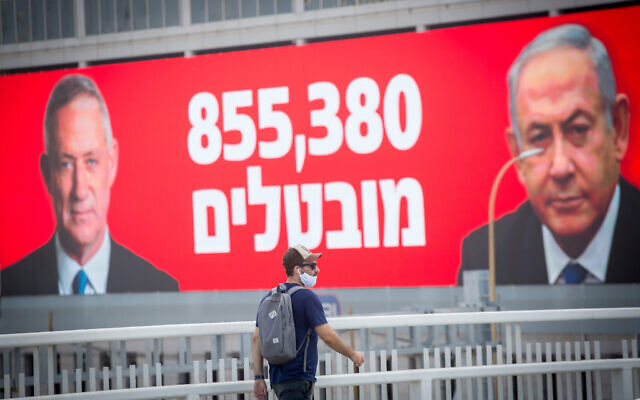 Israelis wear protective masks next to a sign reading how many unemployed there are in the nation, in Tel Aviv, on July 22, 2020. (Miriam Alster/FLASH90)

At least some of the problem in the labor market can be traced to Israel’s all-or-nothing furlough program, which has seemingly made staying on the dole an attractive option.

At the start of the pandemic, to ease the plight of workers and employers, Israel’s Finance Ministry instituted a hastily designed furlough system, taking the responsibility of the workers’ salaries off the shoulders of employers and easing their cash flow issues as revenues diminished or disappeared.

The program was initially rolled out for two months, but was later extended until June 2021 once the government realized that the pandemic was not going to disappear anytime soon and many industries including travel, food and entertainment would be struggling for a prolonged period.

The message to employers was to not worry about the salaries; the government will take care of the workers. Meanwhile, unemployment benefits, although just a percentage of their former salaries, let those employees maintain a basic standard of living and gave them a measure of relief. They could continue spending and thus at least part of the economy would keep on chugging. Such went the thinking.

The program gave employers two choices: each worker could be either kept on or put on 100% furlough — but could not be downgraded to part-time. It was an all-or-nothing situation, with no government help provided for someone who was still working but for fewer hours.

European countries, by contrast, instituted a furlough plan that was flexible and allowed employees to reduce hours but still get paid as if they were full time.

For low-earning workers, especially those who might not get as many hours as they did before the pandemic began, the Israeli system incentivized getting paid to stay at home rather than returning to work for about the same money as the economy reopened. The scheme created a “moral hazard,” critics said, certainly once it was extended until June. 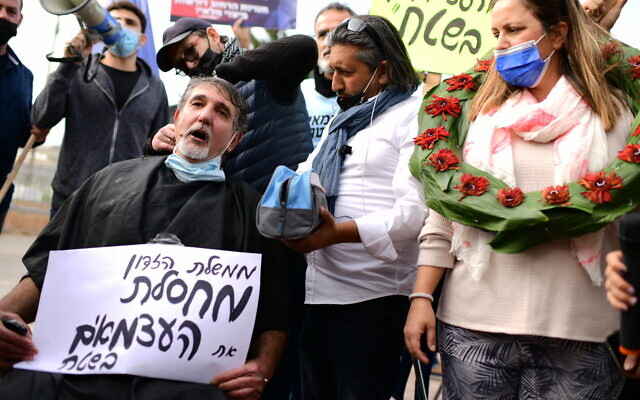 Small business owners protest against the coronavirus restrictions and the and the Israeli government in Holon, January 31, 2021. (Tomer Neuberg/Flash90)

Data published by the Finance Ministry in January showed that the furlough model adopted in Israel has resulted in a greater more number of work hours lost in 2020 than in other European countries, which instituted the more flexible Short-Term Work programs.

“I would not conclude that Israel fared worse based on these numbers,” said Flug. “The main weaknesses of each model and who did better is a question that will be answered only after the pandemic is over and the restrictions are over. ” 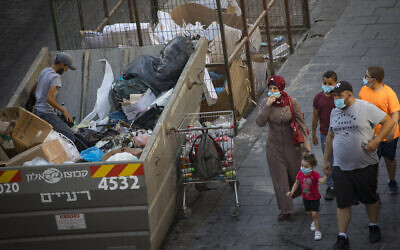 A teenager searches for cans through a garbage container in the center of Jerusalem on September 02,2020. (Nati Shohat/Flash90)

Nonetheless, the Finance Ministry is now changing tack and implementing a flexible furlough model called Back to Work, which will distribute up to four monthly grants to people who return to work after having been furloughed for at least three months, should the job come with less money than they were making before. Those who were laid off for five months or more will get an extra bonus on two of the grants.

The grants are intended to make up the difference between what they were making before and what they are making now, or even beat their old paycheck, enabling the workers to earn at least as much as before in a job that pays less due to reduced hours or other reasons.

The grants will only be available to those who were furloughed before January and return to work by April, to encourage workers to return sooner.

The ministry called it a “win-win” for employers and employees. 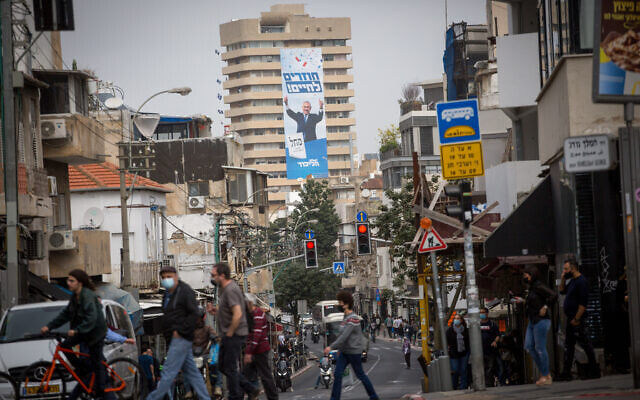 People walking in Tel Aviv on March 11, 2021. The campaign poster in the background says “returning to life.” (Miriam Alster/FLASH90)

Besides implementing a more flexible furlough model, the next government will have to make sure that jobs are created through large-scale investment in infrastructure projects and by providing incentives for the private sector to invest, Flug said.

Additionally, programs must be implemented to provide “large scale training and retraining of people who will probably not be able to get into their previous jobs,” something that the current government has failed to do.

“We have lost a lot of expensive time by not actually offering re-training for those people who are out of work who are not likely to get back into employment, either because the sectors in which they worked will not see such a rapid recovery in demand, or because businesses have learned to make do with less workers.”

Training should include subjects like digital literacy, basic English, Hebrew for the Arab population and other fundamental skills, she said, that would better prepare unskilled and poorly paid populations for the workplace of the future. Other training programs should be set up together with employers’ associations to see what kind of workers are most needed, “so people can get jobs.”

Israel’s economy “will recover from the pandemic,” said Flug. “But I am worried that too many people will stay behind and the people who will stay behind are the ones who were weak to begin with. Those with lower skills, lower wages, lower reserves and savings.”

Over the past 15 years Israel has been on a “very positive path” of bringing people “from welfare to work,” Flug said. The “danger” post-pandemic, “is that it will go back from work to welfare in a very short period of time.”