Catastrophic weather wreaking havoc in the cossetted heart of the developed world, from floods in Germany and Belgium to scorching temperatures in North America, has sent shockwaves into Israel, raising alarms among activists and intensifying calls for Israel to prepare for disaster here as well.

In Germany and Belgium alone, several days of extreme rainfall have left at least 196 people dead and dozens missing as streets, houses and vehicles have been swept away, like toys, by fast-flowing rivers that burst their banks, and by the ensuing landslides. This comes as unprecedented heatwaves are continuing to afflict the western US, where wildfires are consuming tens of thousands of acres, and with the UK issuing its first-ever extreme heat warning.

Leaders, policy-makers, activists and others have connected the dots between the deadly weather and the emerging climate change emergency.

“There’s no argument between us that we are in the midst of a global climate crisis threatening the economic, security, social and environmental stability of both developed and developing countries,” Environmental Protection Minister Tamar Zandberg wrote in an open letter to Prime Minister Naftali Bennett on Monday, noting the floods in Germany and urging him to declare climate change a strategic threat.

On Friday, former Maldives president Mohamed Nasheed, whose archipelago nation is threatened by rising seas, expressed solidarity with Germany, saying, “While not all are affected equally, this tragic event is a reminder that in the climate emergency no-one is safe.”

While no single event can be explained by global warming, climate experts — including the World Meteorological Organization — have warned repeatedly that it is causing, and will continue to cause, ever more extreme weather events globally  including cold and heat waves, floods, droughts, wildfires and storms.

A man walks through the floods towards destroyed houses in Schuld near Bad Neuenahr, western Germany, on July 15, 2021 (Bernd LAUTER / AFP)

While Israel has failed to lead on carbon reduction — environmentalists consider the target of 30 percent energy from renewables by 2030 to be lamentably unambitious — its carbon footprint is minuscule compared to most other developed economies, and is likely outweighed by its development of green tech innovations in fields as diverse as water conservation and alternative protein.

But there are serious questions regarding the extent to which it is prepared for the weather phenomena being caused by the changing climate globally, and whether the public will be protected.

In late June, the state comptroller issued a stinging report (in Hebrew) on flood control measures — or the lack thereof — taken by four local authorities from March to October 2020. 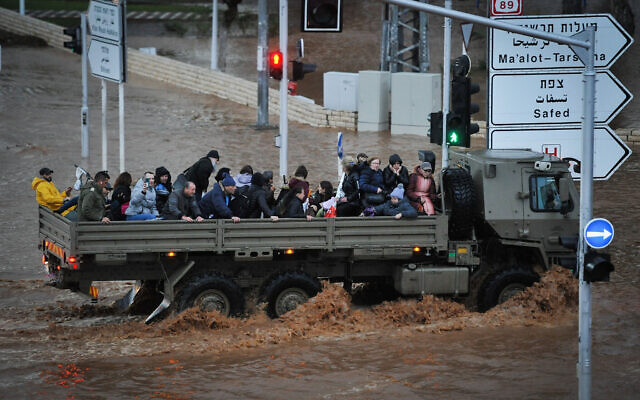 A military vehicle carries people across a flooded road in the northern city of Nahariya on January 8, 2020. (Meir Vaknin/Flash90)

It focused on Nahariya in the north, where flooding in January 2020 inundated large parts of the city center and killed one person, Ashkelon in the south, Tel Aviv exurb Kfar Saba and Jisr az-Zarqa, a crowded Arab hamlet on the coast south of Haifa. The report devoted particular attention to the first two, which were hit particularly hard by flooding in the winter of 2019-2020.

Seven people lost their lives to flooding during torrential rains over several weeks in late December 2019 and early January 2020, particularly near the coast. Among the dead were two young people who drowned in a flooded elevator in a Tel Aviv apartment building.

Some 40%, or 250 millimeters (9.8 inches), of Nahariya’s average annual rainfall fell from January 3 to 9 alone, according to the comptroller report, with damage estimated at NIS 69 million ($21 million at today’s rates).

The report confirmed that extreme flooding events in Israel have risen in number and intensity over recent years, and that construction has reduced the availability of land that can absorb rain. 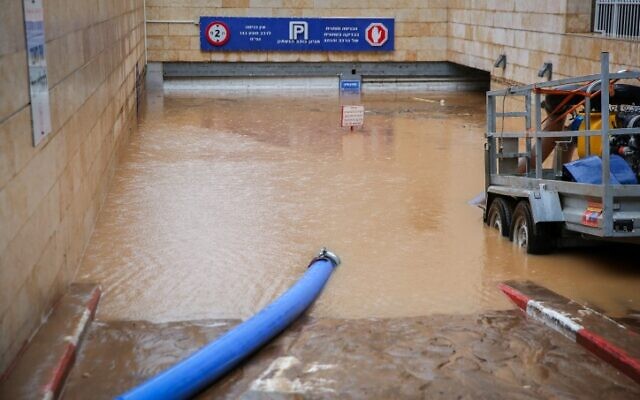 View of the entrance to a flooded parking lot in the northern coastal city of Nahariya, January 9, 2020. (David Cohen/Flash90)

State Comptroller Matanya Englman noted that there is no national body responsible for dictating or enforcing flood control measures on a municipal level, nor is there is any agreed-upon division of responsibility for local drainage systems between the local councils and 11 regional drainage authorities.

He recommended that the Interior Ministry nominate a national body to take charge of and enforce local authority preparedness for extreme weather events.

Furthermore, a flood prediction center set up in 2019 by the country’s meteorological and hydrological services focused on rivers but did not provide predictions for urban areas, the report said.

In Nahariya, Jisr az-Zarqa and Ashkelon, no regular maintenance of drainage systems was carried out and no work plans for doing so existed, according to the document. 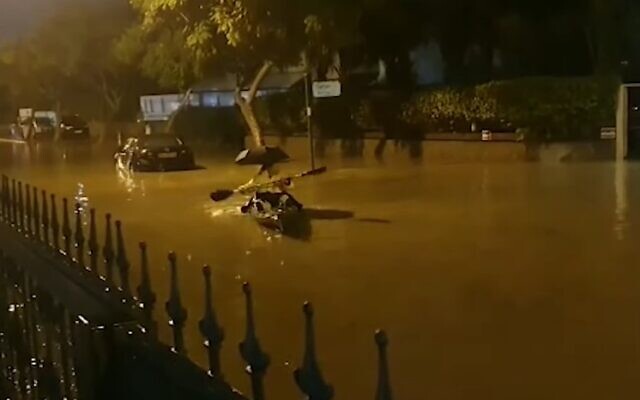 People paddle down a flooded road in the southern Israeli city of Ashkelon on Sunday December 12, 2019 (Screen capture/YouTube)

In the first two, the existing drainage systems had not even been mapped. Masterplans drawn up in Ashkelon and Kfar Saba had only been implemented partially. A plan to protect residents of Nahariya had not been completed.

While all local authorities are authorized to collect a drainage levy from residents, the Interior Ministry, which fixes the rate, did not factor in the danger of climate-related flooding, the state comptroller found. From 2016 to 2020, the four councils collected some NIS 55 million ($16.7 million), less than a third of the NIS 172 million ($52.3 million) they had to pay for drainage work.

The report found that cities okayed developments that lacked proper drainage, ignoring national guidelines and local authorities. Only Kfar Saba was found to have proper rules for dealing with floods or emergency drills for flooding. 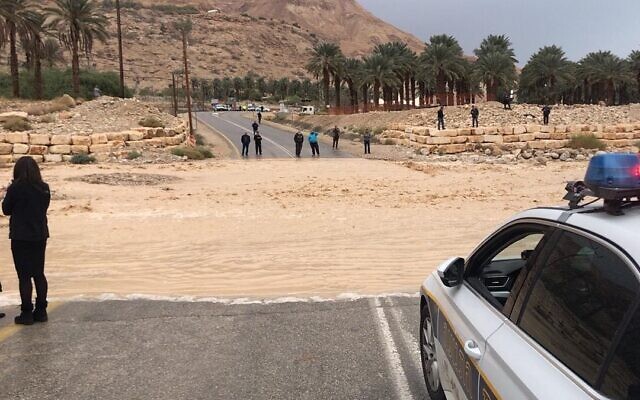 During the main flooding events of winter 2020, neither Nahariya nor Ashkelon  kept logs about their operations and in Nahariya, city hall was so unprepared that it had to call on the local police to take control. Residents affected by the flooding who tried to call the city for help were faced with a non-operational hotline for several hours, leaving their needs unmet.

To its credit, said the state comptroller, Nahariya had implemented reforms and begun to prepare seriously for dealing with floods after studying its failings during that fateful January.

“Among the central issues being advanced are the masterplan, the renewal and thorough treatment of drainage systems and the removal of barriers,” a city spokesman told The Times of Israel. He said other issues had already been dealt with, including the city hotline.

“The council implemented an orderly process to find the takeaways, determined new internal regulations for preparedness, response and dealing with floods, and has begun to implement them,” he said.

An Ashkelon Municipality spokeswoman said that the council had invested substantially in its drainage system over the past two years and was currently carrying out works worth tens of millions of shekels in various flood-prone spots. A drainage solution for a new neighborhood, singled out for criticism by the state comptroller for its lack of a system, had now been approved, she added. 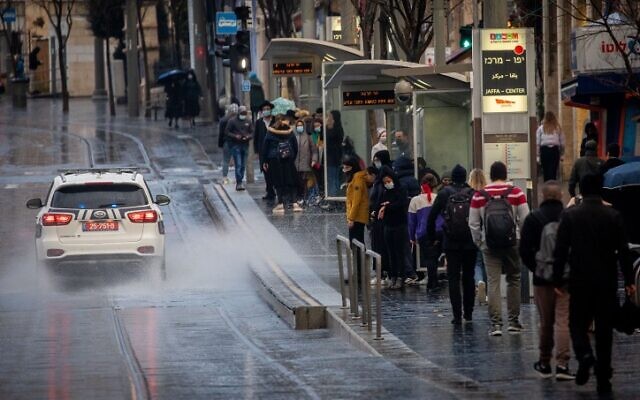 Kfar Saba won a thumb’s up from the state comptroller for its innovative introduction of a storm water biofiltration system that uses plants and various types of soil to capture and clean runoff water and channel it back into the aquifer.

In a position paper completed earlier this year, the environmental advocacy organization Adam Teva V’Din stressed that rainwater runoff should be regarded as a resource rather than a hindrance as the world warms and water sources dry up. It saw the rainwater as a alternative preferable to energy-guzzling desalination plants.

While the National Planning Council is preparing plans to make the most of the rainwater, Adam Teva V’Din raised questions about enforcement, alleging that regulations requiring that land be set aside for drainage were being routinely ignored.

Funding at a trickle

In 2018, the government decided to establish a Climate Change Preparedness Directorate, following recommendations from the Environmental Protection Ministry’s then-chief scientist Sinaia Netanyahu for a national plan to adapt to climate change and extreme weather events.

But while it includes broad representation, the directorate has been seriously underfunded to date.

Alon Zask, the Environment Ministry’s senior deputy director for natural resources, who doubles as head of the directorate, told a Knesset committee last year that the body had an annual budget of just NIS 500,000 ($150,000), well below the NIS 10 million ($2.8 million) that Netanyahu had called for, and no full-time staff.

Nonetheless, he said, the directorate had spent two years working with other ministries and civil society groups on what needed to be done.

“Now that we know what to do and have projects, we need to implement and finance them,” he told the lawmakers. 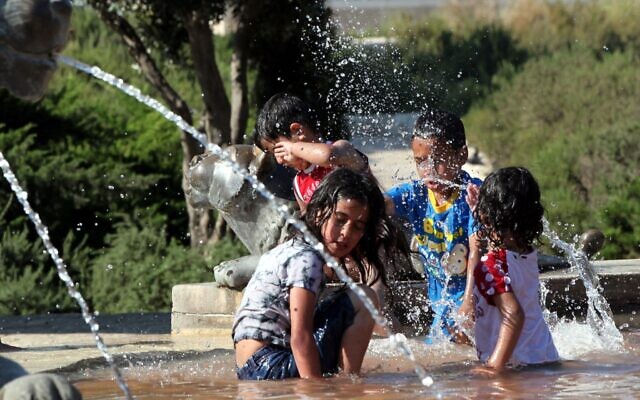 Children cool off in a water fountain in Jerusalem during a heatwave, June 26, 2011. (Yossi Zamir/Flash 90)

A Finance Ministry official, Daniel Metzger, told the same meeting that the Environmental Protection Ministry could earmark more funds if it wanted, but appeared bearish on money coming from elsewhere.

The Finance Ministry’s budget division would “carry out a cost-benefit analysis as it does for all projects,” he said.

In April, the directorate asked in a report for a budget of NIS 2.5 billion ($760 million) to fund short-term projects recommended by the directorate, saying that investment in preparedness would save the much greater costs of an environmental catastrophe for which the country was not ready.

Stressing the importance of helping local government to prepare for extreme events, it called on the government to recognize the climate crisis as a national strategic threat and to define climate resilience as a strategic national goal.

It emphasized the need to get all ministries to integrate climate change considerations into their work plans, to make public education about climate change a top priority, and to upgrade scientific research on the subject.

Zandberg, who took over the ministry in June, has appeared receptive to the need for a preparedness kitty, noting in her letter to Bennett that the EU had pledged to devote 25% of its budget to dealing with climate change and other countries were also devoting considerable resources to the issue. 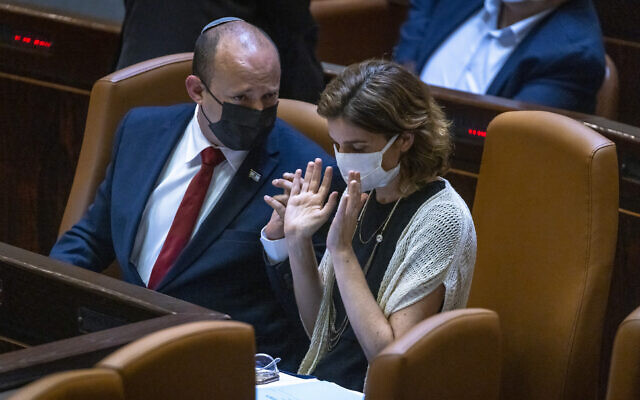 “The Israeli government, entrusted with the lives of Israeli citizens, as well as their health and quality of life, needs to plan for emergency situations, especially those known ahead of time, such as climate change and its consequences,” she wrote.

She may face an uphill battle with Bennett, who did not mention global warming in his first speech as prime minister on June 13.

There are also fears that an upcoming bill accompanying the state budget will water down the ministry’s authority to issue environmental regulations and force it to weigh the economic impacts of its moves, as a Finance Ministry plan calls for.

At a cabinet meeting Monday, Bennett said that Israel was paying attention to the flooding in Germany.

“The issue of climate change is indeed a global problem. The government of Israel regards it as such and soon, in this context, we will suggest actions to be carried out,” he said.

Moments later his cabinet okayed a fast-track planning committee set up to allow large residential projects to bypass regulations, to the dismay of environmentalists.