The sole relatively moderate candidate in Iran’s presidential election conceded his loss early Saturday to the country’s hardline judiciary chief. It signaled the protégé of Supreme Leader Ali Khamenei had won a vote he dominated after the disqualification of his strongest competition.

Counting, however, continued from Friday’s vote and authorities have yet to offer any official results.

Opinion polling by state-linked organizations, along with analysts, indicated that Raisi — who already is under US sanctions — was the front-runner in a field of only four candidates. That led to a widespread apathy among eligible voters in the Islamic Republic, which long has held up turnout as a sign of support for the theocracy since its 1979 Islamic Revolution.

President Hassan Rouhani said Saturday his successor had been elected, but did not name Raisi.

“I congratulate the people on their choice,” said Rouhani. “My official congratulations will come later, but we know who got enough votes in this election and who is elected today by the people.”

In this photo released by the official website of the office of the Iranian Presidency, President Hassan Rouhani casts his ballot for the presidential elections at the Interior Ministry in Tehran, Iran, June 18, 2021 (Iranian Presidency Office via AP)

Hemmati offered his congratulations on Instagram to Raisi early Saturday.

“I hope your administration provides causes for pride for the Islamic Republic of Iran, improves the economy and life with comfort and welfare for the great nation of Iran,” he wrote. 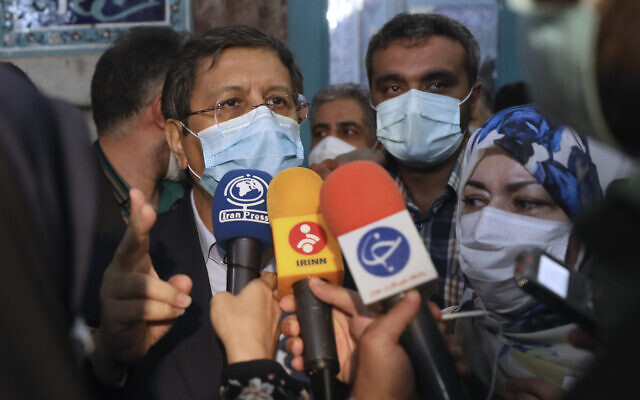 On Twitter, Rezaei praised Khamenei and the Iranian people for taking part in the vote.

“God willing, the decisive election of my esteemed brother, Ayatollah Dr. Seyyed Ebrahim Raisi, promises the establishment of a strong and popular government to solve the country’s problems,” Rezaei wrote.

Balloting came to a close at 2.a.m. Saturday, after the government extended voting to accommodate what it called “crowding” at several polling places nationwide.

In addition to the disqualifications, voter apathy has also been fed by the devastated state of the economy and subdued campaigning amid a months-long surge in coronavirus cases. In images on state TV, poll workers wore gloves and masks, and some wiped down ballot boxes with disinfectants.

Out of an initial field of almost 600 hopefuls for the presidency, only seven — all men — were approved to run by the Guardian Council, a body of 12 clerics and jurists. Two days before polling day, three approved candidates dropped out of the race. 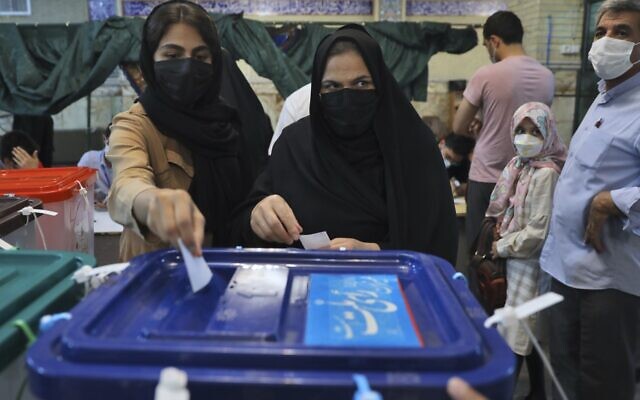 Voters cast their ballots for the presidential elections at a polling station in Tehran, Iran, Friday, June 18, 2021. Iranians voted Friday in a presidential election dominated by a hard-line protege of Supreme Leader Ayatollah Ali Khamenei after authorities disqualified nearly all of his strongest competition, leading to what appeared to be a low turnout fueled by apathy and calls for a boycott. (AP Photo/Vahid Salemi)

Among those disqualified were former parliament speaker Ali Larijani and populist ex-president Mahmoud Ahmadinejad, who was among those calling for a boycott.

If elected, Raisi would be the first serving Iranian president sanctioned by the US government even before entering office, over his involvement in the mass execution of political prisoners in 1988, as well as his time as the head of Iran’s internationally criticized judiciary — one of the world’s top executioners.

It also would put hard-liners firmly in control across the Iranian government as negotiations in Vienna continue to try to save a tattered deal meant to limit Iran’s nuclear program at a time when Tehran is enriching uranium at its highest levels ever, though still short of weapons-grade levels.

Tensions remain high with both the US and Israel, which is believed to have carried out a series of attacks targeting Iranian nuclear sites as well as assassinating the scientist who created its military atomic program decades earlier.

Whoever wins will likely serve two four-year terms and thus may be at the helm at what could be one of the most crucial moments for the country in decades — the death of the 82-year-old Khamenei. Already, speculation has mounted that Raisi may be a contender for the position, along with Khamenei’s son, Mojtaba. 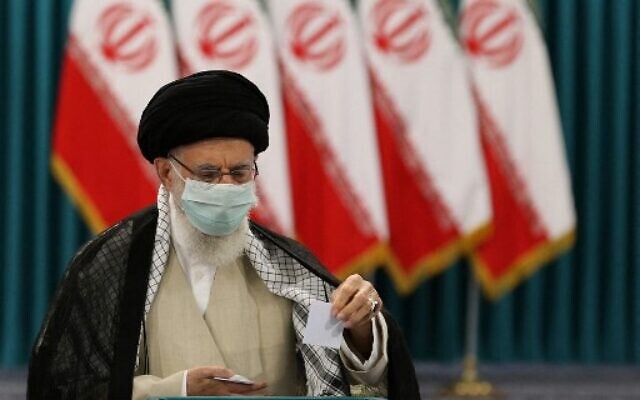 Iran’s Supreme Leader Ayatollah Ali Khamenei casts his vote for the presidential election at a polling station in the capital Tehran, on June 18, 2021.(Atta KENARE / AFP)

For his part, Khamenei warned of “foreign plots” seeking to depress turnout in a speech Wednesday. A flyer handed out Wednesday on the streets of Tehran by hard-liners echoed that and bore the image of Revolutionary Guard Gen. Qassem Soleimani, who was killed in a US drone strike in 2020. A polling station was set up by Soleimani’s grave on Friday.

“If we do not vote: Sanctions will be heavier, the US and Israel will be encouraged to attack Iran,” the leaflet warned. “Iran will be under the shadow of a Syrian-style civil war and the ground will be ready for the assassination of scientists and important figures.”