The report, based on serological studies conducted by Israel’s four health maintenance organizations on health care workers, who were the first Israelis to get the shots in December, found that most had antibody levels above 700. The report said a level of 150 was needed to be considered protected.

The study also found that even elderly, immunocompromised patients on ventilators who were vaccinated were showing high antibody levels.

The report comes as Israel has begun debating the need for a third booster shot a spike in cases and signs that the vaccine was slightly less effective against the Delta variant.

Top ministers met with senior health officials on Tuesday as Israel mulled the return of some restrictions aimed at curbing a recent resurgence of COVID-19 cases.

The meeting came as the number of active coronavirus cases climbed to 3,102, the highest tally since April 14, with 503 new infections Monday and another 262 infections from midnight to early evening Tuesday.

While the number of deaths and hospitalizations has remained relatively low, the figure has begun to climb. The 38 people in serious condition is the highest total since late May.

People walk some with face masks in Jerusalem on July 4, 2021. (Olivier Fitoussi/Flash90)

Health Ministry figures showed that the average daily caseload over the last seven days is 322, compared to a seven-day average of just 205 a week ago.

The resurgence of the virus has become a major issue for Prime Minister Naftali Bennett’s new government, coming less than two months after the numbers of cases had dwindled, allowing Israel to lift most restrictions and reopen public life.

Health Minister Nitzan Horowitz said Tuesday during a conference at Ben-Gurion University that Israel was trying to battle the virus while avoiding “panic” and keeping restrictions to a minimum to enable the continuation of near-normal life.

Israel’s Health Ministry released data on Monday showing that the Pfizer-BioNTech COVID vaccine appears to largely prevent hospitalization and serious cases, but is significantly less effective against preventing the spread of the Delta variant of the coronavirus.

According to the ministry, the Pfizer vaccine’s effectiveness in preventing symptomatic COVID-19 has dropped by some 30 percent to 64%, given the spread of the Delta variant. The data shows that during May, when the strain was less prevalent, the vaccine was 94.3% effective.

The Delta variant, which is believed to be twice as contagious as the original strain of COVID-19, is thought to be responsible for 90% of new cases in Israel over the past two weeks.

The data, however, also shows that the vaccine is still highly effective against preventing serious symptoms and hospitalization. During May, that figure stood at 98.2%, and during June, it was 93%. 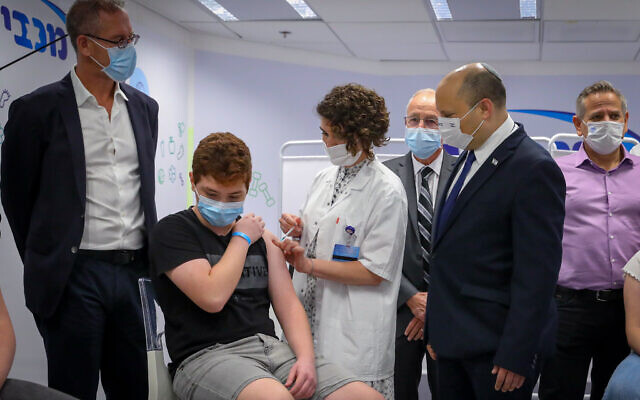 Amid the rise in COVID cases across the country, Prime Minister Naftali Bennett along with Health Minister Nitzan Horowtiz instructed the Health Ministry on Monday to promote two medical studies on the need for a third vaccine shot against the coronavirus, which they said will provide decision-makers with “vital information.”

The Prime Minister’s Office said that the studies, which will be overseen by the head of public health services in the Health Ministry, Dr. Sharon Alroy-Preis, will “evaluate the efficacy of the vaccine and the rate at which it wears off over time.”

One study will examine the effectiveness of the vaccine over time in various age groups and in various states of health. The other will examine cellular immunity (an immune response not involving antibodies) over time.

On Sunday, it was reported that the Health Ministry will recommend immunocompromised Israelis take a third dose of the Pfizer-BioNTech vaccine, even though the pharmaceutical company has not yet sanctioned the booster shot.

Health officials are concerned by data that shows immunocompromised people develop an insufficient antibody response from the two-shot vaccine to shield them from the virus.

On Monday, however, the Health Ministry clarified that “there is no recommendation or decision at this stage to vaccinate the general public in Israel with a third dose.” 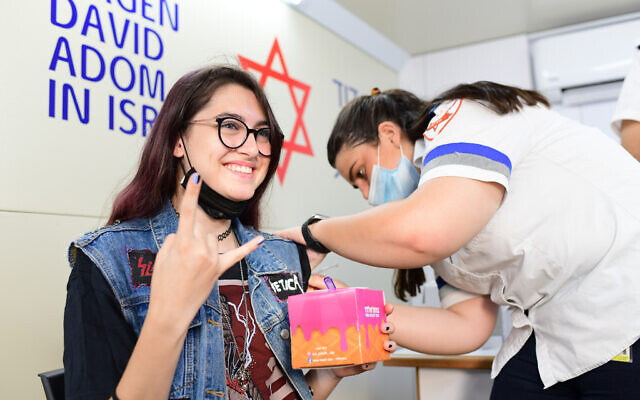 An Israeli teenager receives the COVID-19 vaccine at a vaccination center of the Tel Aviv municipality and Magen David Adom, in Tel Aviv on July 4, 2021. (Tomer Neuberg/Flash90)

Warning of the dangers posed by the Delta variant, opposition leader Benjamin Netanyahu last week urged Bennett and Horowitz to start giving Israelis a third coronavirus vaccine dose in August, despite Pfizer tests on the third dose having not yet been completed.

Netanyahu said in a video released on his social media channels that “from conversations I’ve had with some of the best experts in the world, I believe the third vaccine [dose] should be given to the over-50 population starting in August, in order to finish the task by the end of September.”

He said that no one currently knows when a drop in immunity will leave the population susceptible to infection once again.

“The price of being late… could be deadly and cost many lives,” he said.

Israel purchased millions of vaccines from Pfizer and was among the first countries to receive them late last year. Despite having millions of unused doses, it inked a deal in April under Netanyahu for 18 million more doses, in case they were needed for booster shots. Those doses have yet to arrive.