After Prime Minister Benjamin Netanyahu’s mandate to form a government ended Tuesday night, all eyes are now on the two men who may hold the keys to a potential government replacing the longtime premier, although significant hurdles remain.

Yesh Atid party leader Yair Lapid and Yamina chief Naftali Bennett have been negotiating a potential “change government” — “change” meaning ousting Netanyahu — in which the two would rotate the premiership.

President Reuven Rivlin is now expected to task Lapid with forming a coalition since he is the candidate who received the second-most recommendations in the previous round of talks, although some, including Netanyahu, have been working to get Rivlin to task Bennett due to the chance he would negotiate with the incumbent as well as with Lapid.

But in addition to resolving their own differences, Lapid and Bennett must also muster a majority coalition of at least 61 lawmakers from an unlikely mixture of right-wing, left-wing and centrist parties as well as the Islamist Ra’am party, which complicates matters and raises the question of how stable such a government would be to begin with.

Ra’am leader Mansour Abbas, the only party leader besides Bennett who hasn’t committed to backing either the pro- nor the anti-Netanyahu bloc, told the Kan public broadcaster Wednesday morning that he will tell Rivlin he recommends “anyone with a chance of forming a government and who will negotiate with us.”

“Lapid needs Bennett and Ra’am,” Abbas added. “If a government is formed in Israel, these two parties [Yamina and Ra’am] need to be on the same side regardless of whether they agree [on certain issues]. We want to be the tail end of the process.”

Ra’am also negotiated with Netanyahu, but that didn’t work out due to the objection of Bezalel Smotrich, who heads the far-right Religious Zionism party and vetoed a coalition based on outside support by the “terror-supporting” Islamist party, which is affiliated with the Muslim Brotherhood and whose charter calls Zionism racist.

Bennett before the election had called on Netanyahu to pledge not to form a government reliant on Ra’am, while he himself vowed not to enter into a rotation deal with Lapid.

Bennett and Lapid previously cooperated in 2013 to create their own “brotherhood” alliance, which forced Netanyahu to form a government without his key ultra-Orthodox allies.

Bennett, a religious Zionist politician, is seen as having emerged from under Netanyahu’s shadow, wielding influence that goes beyond his native community and beyond just the right. While he staunchly opposes a Palestinian state and backs many right-wing policies, he is relatively liberal on religious issues and pragmatic on some others, and is seen as mostly independent of the rabbis he tended to follow throughout most of his career.

Lapid said last week that his party and other anti-Netanyahu factions working to form a government were in agreement on numerous issues.

Channel 13 reported this week that Lapid has offered that Bennett become prime minister first in their power-sharing agreement for two years and three months, after which Bennett would become foreign minister and Lapid would assume the premiership. 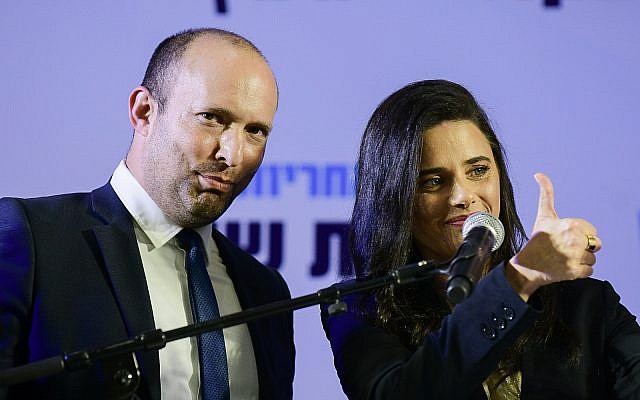 Lapid has also promised a senior portfolio to Yamina’s Ayelet Shaked (either interior or public security), and two or three additional portfolios for members of the seven-MK right-wing party, if a government is formed, according to the report. Lapid is also willing to give Bennett’s right-wing bloc within a prospective unity coalition wide veto powers, the network said.

Hebrew media reports said Lapid, Bennett and New Hope leader Gideon Sa’ar had agreed in principle on a government of 24 ministers — six larger than Lapid had wanted — and were aiming to finalize the division of ministerial portfolios within days.

However, disagreements surfaced over ministries and negotiating schedules as the sides sought to build the trust required to hold together a coalition straddling the fault lines of Israeli politics.

Shaked, Yamina’s no. 2 and a former justice minister, has reportedly demanded to return to the Justice Ministry, which is currently slated for Sa’ar. The conservative Shaked has faced a concerted campaign from the right, especially Likud, not to support a unity government with the left, and is believed to be seeking the justice post so she can explain her membership in the new government as a defense of right-wing policies in the ministry.

If Shaked takes the justice post from Sa’ar, he will demand either the Finance Ministry, currently slated for Yisrael Beytenu’s Avigdor Liberman, or the defense portfolio now held by Blue and White’s Benny Gantz, sources said. 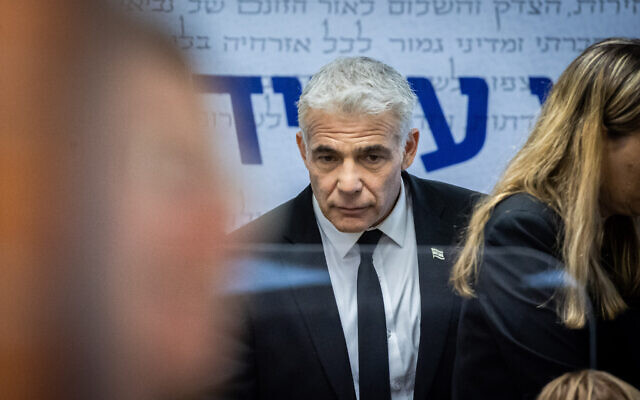 Yesh Atid party leader Yair Lapid at a faction meeting in the Knesset in Jerusalem on April 26, 2021. (Yonatan Sindel/Flash90)

Negotiators from the Yesh Atid, Yamina and New Hope parties held marathon day-long talks last Thursday at the Knesset in a bid to narrow the remaining gaps. Lapid said in a Facebook post that the parties had agreed that on issues of religion and state they must act “wisely and mainly cautiously.”

“Politics and religion are a problematic mix and we have no interest in trampling on anyone,” Lapid wrote, adding that “the issues under dispute are clear to all the sides and now is the time to also look for issues on which there is agreement.”

The comments were widely seen as an overture to the Haredi parties that remain at Netanyahu’s side for now. Bennett reportedly hopes to draw them into the unity coalition after it is established, a move that will require difficult compromises from the secularist Yesh Atid and Yisrael Beytenu, but which could expand and stabilize a unity coalition.

The Yesh Atid leader also said the parties had agreed on the need for a new generation of prime ministers in Israel, after 12 consecutive years of Netanyahu’s leadership.

“The first law that needs to be passed is a term limit for the prime minister,” he said.

Should no government be formed in the coming weeks, the country will soon head to its fifth snap election in two and a half years.