When Palestinian Authority President Mahmoud Abbas issued a formal decree calling for the first Palestinian elections in 15 years, most observers dismissed it as a ploy by an unpopular leadership struggling to remain legitimate.

The Palestinian leadership had promised elections numerous times since the last vote had been held in 2006. That election, which led to a victory for terrorist group Hamas over Abbas’s Fatah movement, was the death knell for Palestinian democracy.

Distrust between the two sides has torpedoed every election push since 2006, with endless promises to return to the ballot box evaporating. Many expected this time to be no different.

But two and a half months later, Abbas has yet to cancel the decree, and the election push has generated a degree of movement on the Palestinian political scene rarely seen since the last legislative vote.

“These elections initially sought to merely reproduce the status quo,” former Palestinian Authority information minister Ghassan Khatib said in a phone call. “But, you know, events can sometimes get out of control.”

Now, however, a high-profile challenge within Fatah by two popular Palestinian figures — representing the most serious challenge mounted to the current PA leadership in years — has raised concerns that Abbas may again nix the vote to avoid an embarrassing loss.

In this October 20, 2012, photo, Palestinian Authority President Mahmoud Abbas shows his ink-stained finger after casting his vote during local elections at a polling station in the West Bank city of Ramallah. (AP/Majdi Mohammed)

By Wednesday, the last day to register party slates for the election, 30 Palestinian parties, including some newly-formed independent ones, had filed lists of candidates to run for spots in the Palestinian legislature. The May 22 legislative vote is the first part of a multi-step process that is also slated to include an election for president in July. 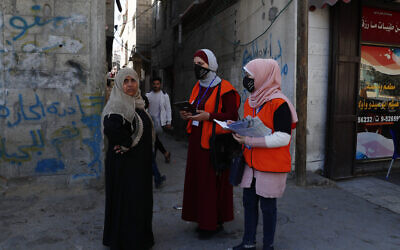 The process was far from unhindered. The Palestinian leadership imposed onerous demands and restrictions on candidates — including a $10,000 registration fee and an additional $10,000 deposit — in what critics deemed an attempt to limit political participation.

“Why are [they] taking $10,000 dollars from me? This is a democratic right. Many lists fell apart, and their members joined other lists or withdrew because they couldn’t pay,” charged Abd al-Aziz Ghawazneh, a lawyer from outside Jerusalem who took part in forming one independent parliamentary slate.

But Khatib said that given the number of new lists which made it, he anticipated that the elections — if they take place — would still bring about some kind of change, rather than merely giving a new veneer of legitimacy to the status quo.

“I don’t know how fundamental, how great this change will be. But the results are likely to constitute a change in the [parliamentary] leadership,” Khatib said.

Ramallah was shaken on Wednesday by a dramatic twist in the legislative campaign: Marwan Barghouti, an enormously popular figure serving time in Israeli prison for terror offenses, joined forces with longtime Abbas critic Nasser al-Kidwa to challenge the official Fatah list with their own slate of candidates under the name Freedom.

Al-Kidwa will take the top spot, while Barghouti’s wife Fadwa will be in second place. Barghouti is rumored to be waiting to make an official run in the Palestinian Authority presidential elections, which are scheduled to take place in July. 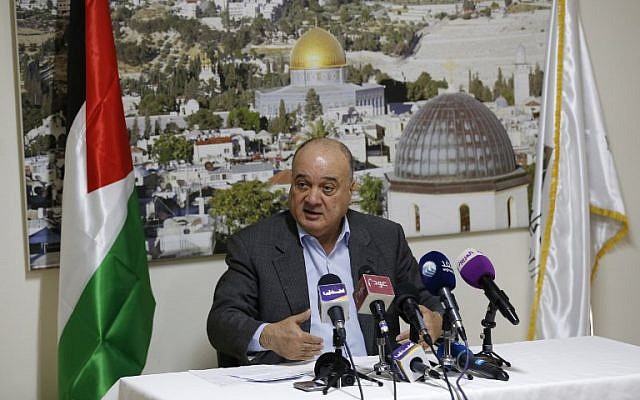 Nasser al-Kidwa, a member of Fatah’s Central Committee and the nephew of late Palestinian leader Yasser Arafat, addresses a news conference in the West Bank city of Ramallah on January 23, 2019. (ABBAS MOMANI / AFP)

The challenge further split Abbas’s movement, which controls the West Bank. Fatah was already divided against itself, with former Fatah security chief and bitter Abbas rival Mohammad Dahlan fielding a group of candidates from exile in the United Arab Emirates. 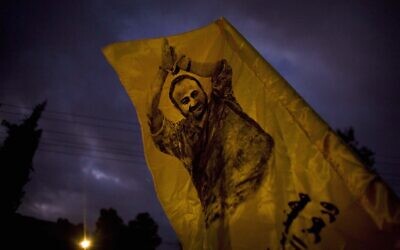 A flag bearing a drawing of Marwan Barghouti is seen during a rally in Bethlehem on Tuesday, Dec. 22, 2009. (AP/ Tara Todras-Whitehill)

Al-Kidwa and Barghouti make an intriguing pair. The former, a senior Fatah official, is respected as a serious and effective politician. Nephew to the late Palestine Liberation Organization chairman Yasser Arafat, al-Kidwa previously served as the PA’s Foreign Minister and Ramallah’s envoy to the United Nations.

While he enjoys some support in elite Palestinian circles, however, al-Kidwa appears to have only a small grassroots constituency. A recent survey found that only 7 percent of Palestinians would vote for al-Kidwa’s list on its own, while 30% said they would vote for the official Fatah list.

Barghouti, on the other hand, is viewed by Palestinians as the archetypal resistance figure and a symbol of leadership untainted by corruption. One Palestinian official described him as “a man of speeches in Ramallah’s Manara Circle, a man of enormous popularity.”

He is also a convicted terrorist, serving five life sentences for directing deadly attacks on Israelis during the Second Intifada. From prison, he has continued to exert influence over Fatah. 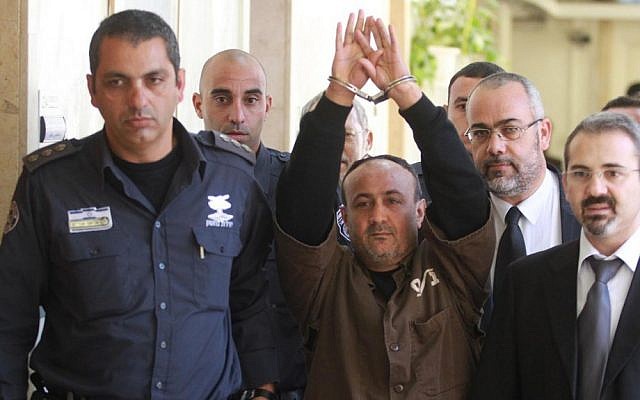 Palestinian Fatah leader Marwan Barghouti is escorted by Israeli police into Jerusalem’s Magistrate Court to testify as part of a US civil lawsuit against the Palestinian leadership, in January 2012. (Flash90)

Both Barghouti and al-Kidwa have also advocated for a more aggressive Palestinian policy towards Israel. Barghouti, a former leader of Fatah’s armed wing, has advocated armed struggle; Al-Kidwa’s faction has called for an end to widely unpopular policies such as security coordination with Israel.

“The current policy toward Israel is relatively tranquil. Barghouti and al-Kidwa’s political thinking is in a more confrontational direction, less conciliatory,” Khatib said.

Senior Fatah official Jibril Rajoub, running as No. 3 on the main Fatah list, sought to dismiss concerns about internal divisions while speaking to reporters in Ramallah.

“Even with our prophet Mohammad, there were apostates,” Rajoub said Wednesday, invoking the factional struggles which split early Islam. “Fatah is strong.” 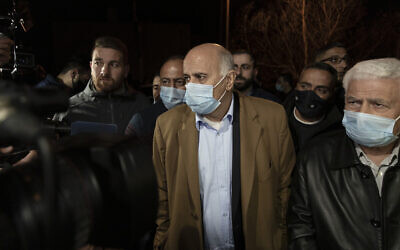 Senior Fatah official Azzam Al-Ahmad acknowledged that Barghouti’s decision to enter the race “took us by surprise.” According to al-Ahmad, Barghouti had informed Fatah’s leadership that he would not challenge the PA leadership.

“We had an agreement with Marwan. He informed us, officially, through meetings with Hussein al-Sheikh, and statements he himself wrote,” said al-Ahmad, who serves on Fatah’s Central Committee.

“I personally communicated with Marwan through his wife, Fadwa. He told me the same thing: that he was not thinking of forming a list,” al-Ahmad told The Times of Israel. 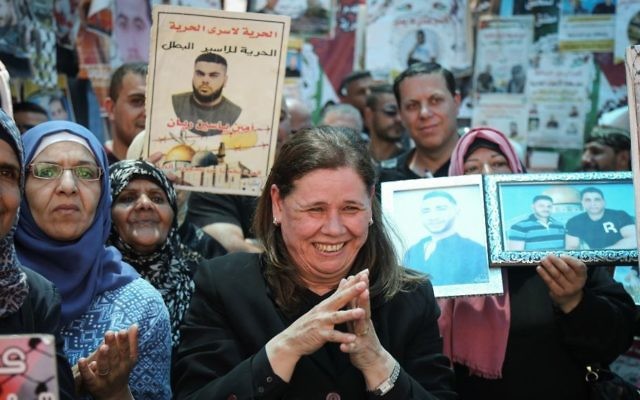 According to al-Ahmad, Fatah officials attempted to make a last-minute push to get Barghouti to back off from his decision with only 15 hours to go before the deadline. But Israel did not issue the proper approval for al-Sheikh to visit the jailed Palestinian politician — or even speak to him over the phone, al-Ahmad claimed.

But Israeli officials denied the claim on condition of anonymity, without elaborating.

From divide and conquer to ally or die

Following Barghouti and al-Kidwa’s announcement, rampant speculation began that Abbas — fearing a potential loss to them or to a Hamas bolstered by internal Fatah divisions — will seek to delay or even cancel the vote. 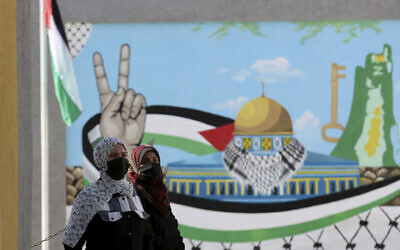 Women wear face masks as they wait at the registration station of the Central Elections Commission to register their names to the electoral roll, in Gaza City, February 10, 2021. (Adel Hana/AP)

But with popular anticipation building for the vote, Abbas could pay a heavy price for delaying the election, Khatib said.

“We refuse to postpone the elections on any pretext,” senior Hamas official Mousa Abu Marzouq wrote on Tuesday night, after the first news of Barghouti’s participation in the elections broke, bringing with it the specter of Hamas’s 2006 victory over a divided Fatah in the previous legislative elections.

However, a quiet change in Palestinian elections law, little attended to in the Israeli press, could stunt Hamas’s chances of repeating its success.

The previous voting system was fought district by district. Candidates from the popular but deeply divided Fatah battled each other while Hamas exercised tight internal discipline.

While Hamas beat Fatah by only 3% in the overall popular vote, the Islamist movement took 74 out of 132 seats in the Palestinian legislative parliament to Fatah’s 45.

But in a letter to Abbas in December, Hamas political bureau chief Ismail Haniyeh agreed to participate in elections conducted according to fully proportional voting. Palestinians will vote for a single national list, similar to the Israeli voting system, rather than one based on geographic representation. 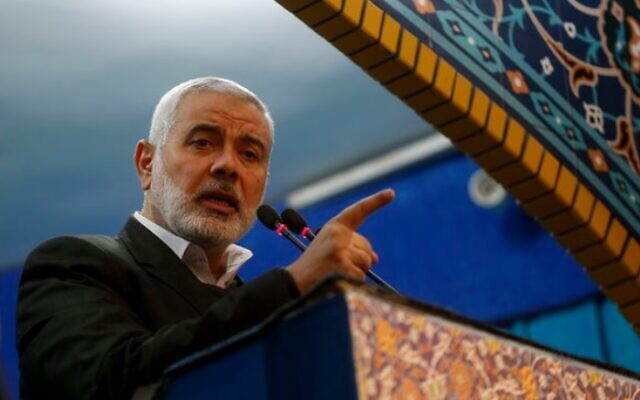 Officials in Ramallah have argued they have little to fear from a Hamas coup, as they deem it unlikely that Hamas will receive an absolute majority in the Palestinian legislature under the new law.

“The new elections law prevents any side from achieving a majority in the legislative elections. Every faction will need to make alliances — either within the framework of the elections or afterward,” senior PLO official Ahmad Majdalani told The Times of Israel in February.

Ghawazneh, the lawyer from al-Ram, struck a much more somber note. As he sees it, the elections still might not happen. But even if they do, Ghawazneh said, they would likely only lead to more division among Palestinians.

“What’s happening in Palestinian affairs is so worrying. Things aren’t going well,” Ghawazneh said. “May God protect us from whatever’s next.”