Rescuers recovered two more bodies to bring the death toll in the Florida apartment block collapse to 24, authorities said Saturday, vowing to quickly raze the rest of the structure before the potential arrival of Tropical Storm Elsa.

Demolition workers will bring down the remainder of a partially collapsed condo building in South Florida ahead of the approaching storm that has heightened concerns that the structure could crumble dangerously on its own, officials said.

Ahead of the demolition, the search and rescue operation was suspended on Saturday.

Miami-Dade Assistant Fire Chief Raide Jadallah told family members that rescuers stopped their search at about 4 p.m., when demolition crews began boring holes into the concrete of the still-standing portion of Champlain Towers South in Surfside. The suspension prompted concern from one family member who called it “devastating” that work had to stop.

Jadallah said the work stoppage was a necessary safety measure because the drilling could cause the structure to collapse. If it does, he said, “It’s just going to collapse without warning.”

Also Saturday, the New York Times reported that engineers who have reviewed the building’s plans have noted a discrepancy between the original 1979 design plans and the steel reinforcement in key spots in the building, which were less than the designs had called for.

Rescue teams use jack hammers to chip through debris and rubble as they continue to look for survivors at the partially collapsed Champlain Towers South Condo building in Surfside, Fla., on Saturday, July 3, 2021. (Matias J. Ocner/Miami Herald via AP)

The preliminary assessments could explain the collapse of the building, though experts urged caution until the full investigation could be completed and noted that completed structures frequently deviate from the original plans.

Governor says demolition to be completed by Tuesday

With Tropical Storm Elsa looming in the Caribbean and forecast to move toward the state in the coming days, Florida Gov. Ron DeSantis said the building in Surfside is “tottering” and “structurally unsound” and demolishing it is the prudent thing to do.

The demolition could be a precarious operation as experts enter the building to bore into the structure and set explosives.

Concerns over its stability have curtailed the search in adjacent areas, and shifts detected by monitors early Thursday prompted a 15-hour suspension of the entire effort until engineers determined it was safe to resume. 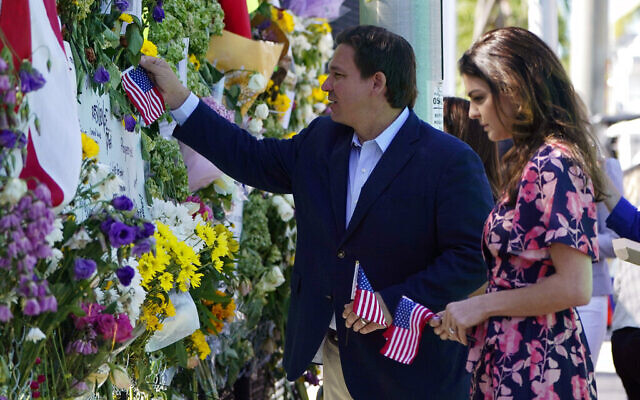 Once it is demolished, the remnants will be removed immediately with the intent of giving rescuers access for the first time to parts of the garage area that are a focus of interest, Jadallah said. That could give a clearer picture of voids that may exist in the rubble and could possibly harbor survivors.

No one has been rescued alive since the first hours after the June 24 collapse. The town of Surfside, the site of the collapse, is at least a third Jewish, with a large Orthodox population. Several of the victims identified were part of this Jewish community. 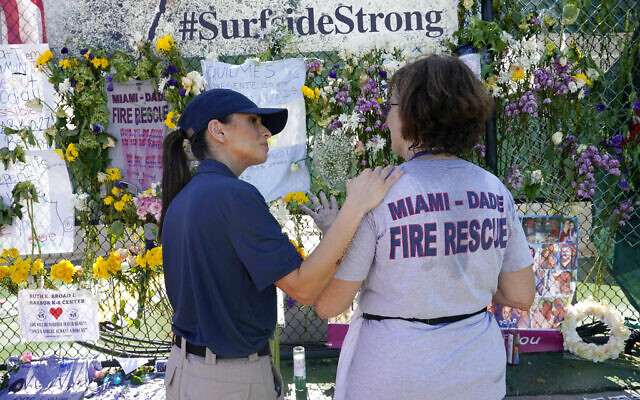 Most of the 12-story Champlain Towers South building collapsed in the early hours of June 24, sending up a huge cloud of dust and rattling Americans unprepared for such a deadly urban disaster.

Authorities had previously said the work could take weeks, but DeSantis, a Republican, said accelerating demolition was only prudent.

He said demolition could be completed within 36 hours — entailing “minimal work stoppage from the search and rescue teams” — and that work sifting through the existing debris could resume as soon as it is clear that no fires have erupted. 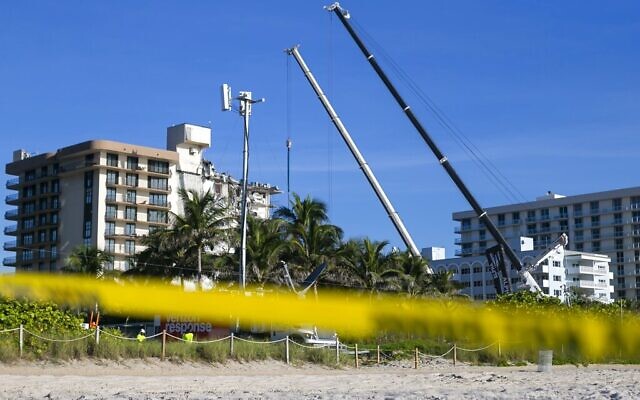 Some families had asked to be able to return to the building to retrieve personal belongings, but they will not be allowed to do so.

“At the end of the day, that building is too unsafe to let people go back in,” DeSantis said. “I know there’s a lot of people who were able to get out, fortunately, who have things there. We’re very sensitive to that, but I don’t think there’s any way you can let somebody go up in that building given the shape that it’s in now.’’

The governor also declared a state of emergency ahead of the storm’s arrival.

Miami-Dade fire chief Alan Cominsky said meanwhile several cases of Covid-19 had been detected in one team of searchers.

That team, he said, had been demobilized, and medical protocols put in place to isolate anyone affected.