KABUL, Afghanistan (AP) — The Taliban raised their flag over the Afghan presidential palace Saturday, a spokesman said, as the US and the world marked the 20th anniversary of the September 11 attacks.

The white banner, emblazoned with a Quranic verse, was hoisted by Mullah Mohammad Hassan Akhund, the prime minister of the Taliban interim government, in a low-key ceremony, said Ahmadullah Muttaqi, multimedia branch chief of the Taliban’s cultural commission.

The flag-raising marked the official start of the work of the new government, he said. The composition of the all-male, all-Taliban government was announced earlier this week and was met with disappointment by the international community which had hoped the Taliban would make good on an earlier promise of an inclusive lineup.

Two decades ago, the Taliban ruled Afghanistan with a heavy hand. Television was banned, and on September 11, 2001, the day of the horrific attacks on America, the news spread from crackling radios across the darkened streets of the Afghan capital of Kabul.

The city rarely had electricity and barely a million people lived in Kabul at the time. It took the US-led coalition just two months to drive the Taliban from the capital and by December 7, 2001, they were defeated, driven from their last holdout in southern Kandahar, their spiritual heartland.

Twenty years later, the Taliban are back in Kabul. America has departed, ending its ‘forever war’ two weeks before the 20th anniversary of 9/11 and two weeks after the Taliban returned to the Afghan capital on August 15.

Some things have changed since the first period of Taliban rule in the 1990s.

This time, the gun-toting fighters don’t race through the city streets in their pickups. Instead, they inch through chaotic, clogged traffic in the city of more than 5 million. In Taliban-controlled Kabul in the 1990s, barber shops were banned. Now Taliban fighters get the latest haircuts, even if their beards remain untouched in line with their religious beliefs.

But the Taliban have begun issuing harsh edits that have hit women hardest, such as banning women’s sports. They have also used violence to stop women demanding equal rights from protesting.

Inside a high-end women’s store in the city’s Karte Se neighborhood Saturday, Marzia Hamidi, a Taekwondo competitor with ambitions of being a national champion, said the return of the Taliban has crushed her dreams. 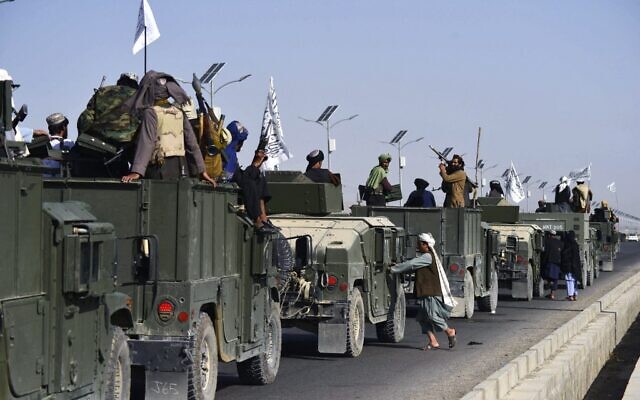 Taliban fighters atop Humvees prepare before parading along a road to celebrate after the US pulled all its troops out of Afghanistan, in Kandahar on September 1, 2021, following the Talibans military takeover of the country. (Javed Tanveer/AFP)

She was among the women attacked by the Taliban and called “agents of the West” during one of the recent protests. She said she’s not surprised about America’s withdrawal.

“This year or next year, they had to leave eventually,” she said. “They came for their own interest and they left for their interest.”

Hamidi is hoping the Taliban will relent and ease their restrictions, but with a glance toward the store owner, Faisal Naziri, she said “most men in Afghanistan agree with what the Taliban say about women and their rules against them.”

Naziri nodded, saying preserving the rights of women is not a cause that will bring Afghan men on the streets.

On Saturday, the Taliban even orchestrated a women’s march of their own. This one involved dozens of women obscured from head to toe, hidden behind layers of black veils. They filled an auditorium at Kabul University’s education center in a well-choreographed snub to the past 20 years of Western efforts to empower women.

Speakers read from scripted speeches celebrating the Taliban victory over a West they charged was anti-Islam. The women marched briefly outside the center grounds, waving placards saying “the women who left don’t represent us,” referring to the many thousands who fled in fear of a Taliban crackdown on women’s rights. “We don’t want co-education,” read another banner.

Outside the hall, the Taliban director of higher education, Maulvi Mohammad Daoud Haqqani, said 9/11 was the day “the world started their propaganda against us calling us terrorists and blaming us” for the attacks in the United States. 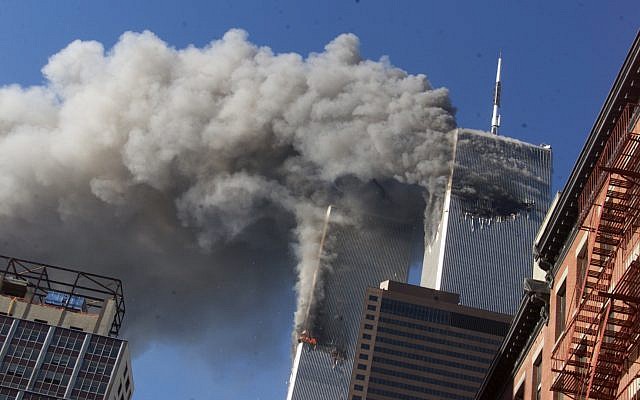 In this Sept. 11, 2001, file photo, smoke rises from the burning twin towers of the World Trade Center after hijacked planes crashed into the towers in New York City. (AP Photo/Richard Drew, File)

He blamed the invasion that followed the 9/11 attacks for creating another generation of hardline Taliban fighters.

“The Taliban should have been allowed to stay. Why didn’t we work with them? Instead they went to fight,” he said.” And now we are back to where we were 20 years ago.”