The 24th Knesset was sworn in on Tuesday, but how long it would last remained unclear, with the prospect of yet another election looming following the fourth inconclusive parliamentary polls in two years.

The ceremony, usually a festive event, was a muted and somewhat dour affair, as the country remains gripped by an ongoing political crisis that shows little sign of abating.

The ceremony was held after President Reuven Rivlin tasked Prime Minister Benjamin Netanyahu, the Likud leader, with forming a government, while saying he was doing so reluctantly — noting the apparently slim prospects for any party leader to assemble a coalition and the incumbent prime minister’s ongoing corruption trial, which was taking place concurrently across town in Jerusalem.

Arriving for the ceremony, Rivlin was greeted by Knesset Speaker Yariv Levin, who only days earlier joined other Likud lawmakers in lashing out at the president, accusing him of seeking to oust Netanyahu.

Speaking from the rostrum, a sometimes emotional Rivlin noted the changing nature of Israeli society, which he said went from a “clear majority that shares a value system and relatively homogenous beliefs” to one divided along tribal lines — secular, religious, ultra-Orthodox and Arab.

Those divides, he said, were painfully exposed during the past year’s pandemic and must be bridged.

Rivlin then implored lawmakers to display leadership, bridge ideological divides and give Israelis a stable government after over two years of political turmoil.

“Today, I am before a parliament that has dissolved itself four times in less than two years. A parliament that has relinquished, time after time, the right to express its confidence in the government. The disagreements that divide our society are genuine differences. Many of them are matters of principle. But there are times when we are obliged to resolve even wrenching, tough, painful disagreements,” he said.

Rivlin urged leadership that steers away from “separatism and alienation, which may be appropriate for the campaign trail, but are destructive when it comes to building a country and leading a people. Leadership of partnership and respect.”

His voice broke as he said that “I believe in this people. I believe in it because this is the lesson that history has taught me, both recent and less so. I was born before this nation was established, I was a child during the struggle to establish it. And I was there on the day that the Israeli flag was hoisted to the top of the mast, the flag of the Jewish and democratic state.

“I believe in it because this people has showed its strength throughout this pandemic. I believe. Please, believe as well.”

Speaking after Rivlin, Levin warned Israel’s four national elections since April 2019 were causing Israelis to lose faith in their leaders.

The growing distrust was a “great danger” to the country and “democracy itself,” he said.

“The downsides of democracy are many, including the difficulty to reach an agreement that will enable the long and stable leadership of elected representatives. But democracy has been, and continues to be, a better system than any other,” Levin said.

He then took a shot at “public servants” and the judicial system, with the first being a likely reference to Attorney General Avichai Mandelblit and other officials in the state prosecution and justice system, which Likud has regularly railed against as it put the premier on trial, as well as on various legislative matters.

Democracy “is better than rule of public servants who use their power to thwart government policy. It is better than the rule of the judge who interferes in legislation without authority.”

He also expressed hope this Knesset would be long-lived. 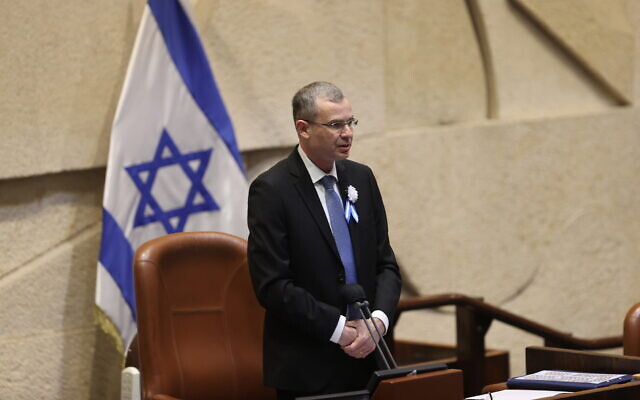 Knesset Speaker Yariv Levin at the swearing-in of the 24th Knesset, on April 6, 2021. (Alex Kolomoisky/Pool/Flash90)

Following his comments, the Knesset’s 120 members were sworn in.

Members of the Arab-majority Joint List alliance shocked the plenum by changing the standard statement of “I commit,” denoting a commitment to Israel and carrying out one’s duties as an elected representative.

Instead, the MKs stated: “I commit to fighting occupation and apartheid” and variations thereof.

Their statements elicited expressions of anger from other MKs. Levin disqualified the declarations. The MKs will need to give the proper declaration at a later time or be denied some of their rights as MKs.

Also, shortly after the ceremony, Shas’s Interior Minister Aryeh Deri and United Torah Judaism’s Housing Minister Yaakov Litzman tendered their resignation from parliament, to allow other members of their parties to enter the legislature under the so-called Norwegian Law, as they remain ministers. 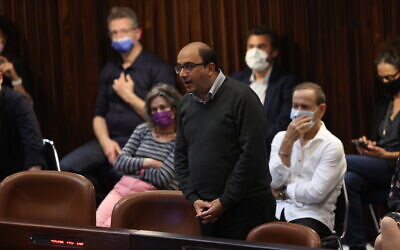 Unlike the swearing-in of the 23rd Knesset last year, which was held under strict social distancing rules amid the COVID-19 pandemic, nearly all lawmakers were in the plenum for the ceremony.

The relaxed rules come after Israel has fully vaccinated over half of its population.

Lawmakers were also allowed to invite one vaccinated family member.

Several lawmakers were absent from the ceremony, including Ra’am leader Mansour Abbas, who was hospitalized over reported kidney stones. Likud MK Shlomo Karhi said he was skipping Rivlin’s speech, in apparent protest of the president not inviting Netanyahu to the traditional ceremony at which he announced the Likud chief would get first shot at trying to form a government.

“Those who boycott the prime minister of Israel — who is the candidate who received the most recommendations [for the premiership] — belittle the ceremony of giving the mandate to form a government and trample on democracy and the votes of two million voters, [and] are not worthy of being honored in [the] Knesset,” Karhi tweeted.

The apparent tensions between Rivlin and Netanyahu cast a shadow over elements of the Knesset ceremony as well, with the president absent from the customary sit-down with the prime minister, Knesset speaker and Supreme Court chief justice. Rivlin also did not take part in the traditional photograph of party leaders. 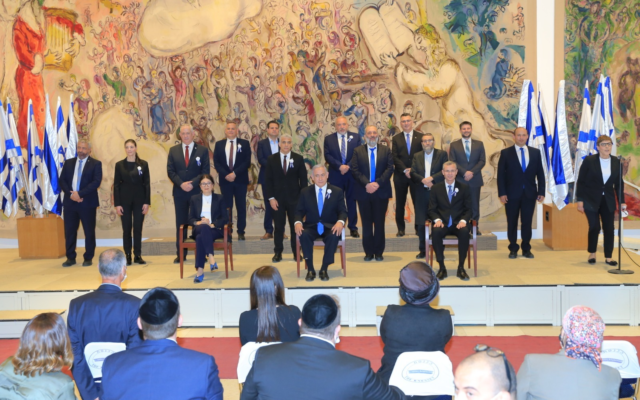 The party leaders in the new Knesset pose for a group photo. April 6, 2021 (Knesset spokesperson’s office)

As the ceremony was being held, protests took place outside the building against the entry into the Knesset of the extremist Noam faction as part of the Religious Zionism party, which seeks to curb LGBT and women’s rights.

Demonstrators urged lawmakers not to advance any such bills.

“A frightening Knesset was sworn in today with extremest and dark elements,” Hagit Pe’er, head of the Na’amat women’s rights group, was quoted saying by the Walla news site.

Having been tasked with forming a government, Netanyahu now has 28 days to try to muster a coalition that can win majority support in the Knesset, but, given that he only has the backing of 52 out of 120 lawmakers, it will be a challenge.

Netanyahu was endorsed by his Likud party, with 30 seats, Shas, with 9; United Torah Judaism, 7; and Religious Zionism, 6.

Yesh Atid leader Yair Lapid was recommended as prime minister by 45 lawmakers (Yesh Atid 17, Blue and White 8, Yisrael Beytenu 7, Labor 7, Meretz 6), and Naftali Bennett was recommended by the seven members of his own Yamina party.

The three parties that made no recommendation account for the final 16 Knesset seats (New Hope 6, Joint List 6, and Ra’am 4).

Neither the pro- nor anti-Netanyahu bloc has a clear path to a coalition majority. Yamina and Arab-Israeli Ra’am have not committed to either bloc, and potentially hold the balance of power between them.

Rivlin has indicated he may not give the mandate to a second candidate if Netanyahu fails, and immediately send it back to the Knesset.